Life of a Poet: Educator Webinar with Marilyn Chin - National Council of Teachers of English

NCTE offers opportunities to connect and learn with members all throughout the year. 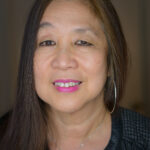 Join the National Council of Teachers of English and the Center for Learning, Literacy, and Engagement at the Library of Congress on Thursday, June 11, at 4 p.m. ET for a webinar conversation with award-winning poet Marilyn Chin as she talks to educators about her life as a poet. Chin will introduce her own approach to writing, share and discuss two of her poems, and dedicate ample time for Q&A.

The two poems that will be shared are “The Floral Apron” and “Hospital in Oregon“.This poem is inspired by an Emily Dickinson poem, “I heard a Fly buzz.”

In 2018, Marilyn Chin participated in the Library of Congress’ “Life of a Poet” event at the Hill Center at the Old Naval Hospital in Washington, DC, where she discussed her life and work with Washington Post Book World critic Ron Charles. The event is available to watch on the Library’s site. We encourage you to watch a portion of the event before the webinar because it provides rich context for Chin’s work. View Marilyn reading and sharing a few of her poems. 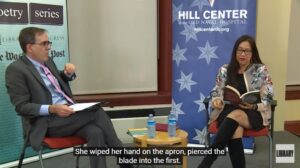 Marilyn Chin was born in Hong Kong and raised in Portland, Oregon. She is an award-winning poet and writer and her works have become Asian American classics and are taught all over the world. Her books include A Portrait of the Self as Nation: New and Selected Poems, Hard Love Province, Rhapsody in Plain Yellow, Dwarf Bamboo, and The Phoenix Gone, the Terrace Empty. Her book of wild girl fiction is called Revenge of the Mooncake Vixen.

She has won numerous awards, including the Anisfield-Wolf Book Award, the United States Artist Fellowship, the Radcliffe Institute Fellowship at Harvard, the Rockefeller Foundation Fellowship, two NEAs, the Stegner Fellowship, the PEN Oakland/Josephine Miles Literary Award, five Pushcart Prizes, a Fulbright Fellowship to Taiwan, a Lannan Award and others. 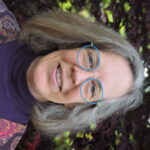 Marilyn Chin will be interviewed by NCTE member Mary Lee Hahn, a teacher-poet. Mary Lee Hahn has taught fourth or fifth grade for 35+ years. She is the author of Reconsidering Read-Aloud and her poems can be found in more than a half-dozen anthologies. She collects her poetry at Poetrepository.