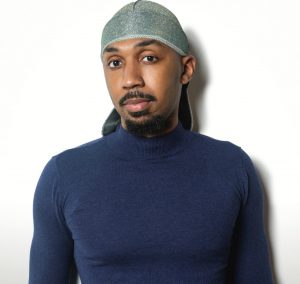 George M. Johnson (they/them) is an award-winning Black nonbinary activist and author of The New York Times–bestselling young adult memoir All Boys Aren’t Blue (Farrar, Straus and Giroux, 2020) and We Are Not Broken (Little, Brown Books for Young Readers, 2021). All Boys Aren’t Blue was named a best book of the year by the New York Public Library and the Chicago Public Library, and it has been optioned for television by Gabrielle Union’s I’ll Have Another Productions. Johnson has written for several major outlets, including Teen Vogue, VICE, Entertainment Tonight, NBC, The Root, Buzzfeed, Essence, and TheGrio.

All Boys Aren’t Blue was the third title on the American Library Association’s Top 10 Most Challenged Books of 2021, an annual list released during National Library Week. Like most of the books on the list, All Boys Aren’t Blue was challenged for LGBTQ+ content, which is disproportionately targeted for censorship alongside works dealing with racism and racial identity. Several state legislatures have passed or are considering laws that would limit instruction related to LGBTQ+ identity and race. Johnson and many other authors addressing these issues are impacted, and students are harmed by the resulting censorship.

“Being the honorary chair for Banned Books Week is important to me because I know what it is like to grow up and not have stories about my own lived experience, nor the truth outside of an ahistorical context,” says Johnson. “This is a fight for the truth that has always existed even if it rarely gets told. When the youth are empowered with stories about the experiences of others, they become adults who understand the necessity for equity and equality and have the tools to build a world the likes of which we have never seen.”

Since it was founded in 1982, Banned Books Week has drawn attention to the attempts to remove books and other materials from libraries, schools, and bookstores. Banned Books Week 2022 has the theme “Books Unite Us. Censorship Divides Us.” All readers deserve to see themselves reflected in the books available to them, and people better understand themselves and each other when given the opportunity to choose what they want to read without restriction. This is particularly true for young people, who are most impacted by censorship. The theme image of caged birds reminds us that censorship isolates us from information and from each other.

Visit bannedbooksweek.org for information about Johnson’s events, programming ideas, and promotional materials; check out the latest edition of the Celebrate Banned Books Week Handbook; and follow @BannedBooksWeek on Twitter for the latest Banned Books Week and censorship news.

Learn more about the Top 10 Most Challenged Books of 2021 at ala.org/bbooks/top and the issues facing America’s libraries at www.ala.org/news/state-americas-libraries-report-2022

George M. Johnson is a writer and activist based in New York. They have written on race, gender, sex, and culture for Essence, the Advocate, BuzzFeed News, Teen Vogue, and more than 40 other national publications. George has appeared on BuzzFeed’s AM2DM as well as on MSNBC. All Boys Aren’t Blue is their debut and was an Amazon Best Book of the Year, an Indie Bestseller, a People Magazine Best Book of the Year, and optioned for television by Gabrielle Union. The New York Times called it “an exuberant, unapologetic memoir infused with a deep but cleareyed love for its subjects.”

ABOUT THE BANNED BOOKS WEEK COALITION

The Banned Books Week Coalition is an international alliance of diverse organizations joined by a commitment to increase awareness of the annual celebration of the freedom to read. The Coalition seeks to engage various communities and inspire participation in Banned Books Week through education, advocacy, and the creation of programming about the problem of book censorship.