< Back to Get Involved

As we have witnessed the COVID-19 pandemic impact organizations, universities, and school districts nationwide, we are taking the appropriate measures to ensure that the content to be shared in the 2020 NCTE Leadership and Advocacy Summit will not be delayed. The Summit has moved to online-only events, and we are working carefully to cultivate a wonderful digital program. We hope this exciting news will provide comfort regarding travel concerns with the spread of COVID-19.
We are pleased to have reconfirmed Tony Wagner’s session for April 7, 4:30–5:30 p.m. ET, and Ernest Morrell’s session for April 29, 4:30–5:30 p.m. ET. Ernest Morrell is the Coyle Professor of Literacy Education and Inaugural Director of the Center for Literacy Education at the University of Notre Dame. He is an elected Fellow of the American Educational Research Association and past president of the National Council of Teachers of English. Ernest has been annually ranked among the top 200 university-based education scholars in the RHSU Edu-Scholar Public Influence Rankings published by EdWeek. He has authored 90 articles and book chapters and ten books His scholarly interests include: literacy studies, new directions in the teaching of English, critical media pedagogy, youth popular culture, and the literature of the African Diaspora. Tony Wagner, a globally recognized voice in education, is currently a Senior Research Fellow at the Learning Policy Institute, founded by Linda Darling-Hammond in 2015. Prior to this appointment, Tony held a variety of positions at Harvard University for more than twenty years, including four years as an Expert in Residence at the Harvard Innovation Lab and the founder and co-director, for more than a decade, of the Change Leadership Group at the Harvard Graduate School of Education. His previous work experience includes twelve years as a high school teacher, K-8 principal, university professor in teacher education, and founding executive director of Educators for Social Responsibility. Tony is a frequent speaker at national and international conferences and a widely published author. His work includes numerous articles and six books. Tony’s latest, Most Likely To Succeed: Preparing Our Kids for The Innovation Era, co-authored by Ted Dintersmith, was published by Scribner in 2015. Creating Innovators: The Making of Young People Who Will Change The World, was published in 2012 to rave reviews and has been translated into 17 languages. His 2008 book,  continues to be an international best seller, with more than 140,000 copies in print.

Tony served as the Strategic Education Advisor for a major new education documentary, “Most Likely to Succeed,” which had its world premiere at the 2015 Sundance Film Festival. He also collaborated with noted filmmaker Robert Compton to create a 60 minute documentary, “The Finland Phenomenon: Inside The World’s Most Surprising School System” in 2010.

Tony earned an M.A.T. and an Ed.D. at the Harvard University Graduate School of Education.

Snapshots of the 2019 Summit

Take a look at just a small sample of the many things that took place during this year’s event. 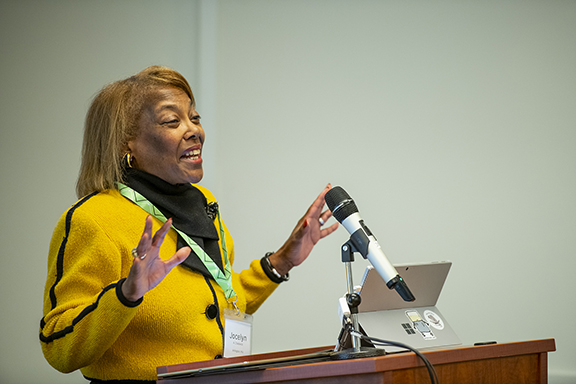 NCTE Past President Jocelyn A. Chadwick shared her perspective as a longtime participant in advocacy for NCTE, and talked about why NCTE members’ voices matter. 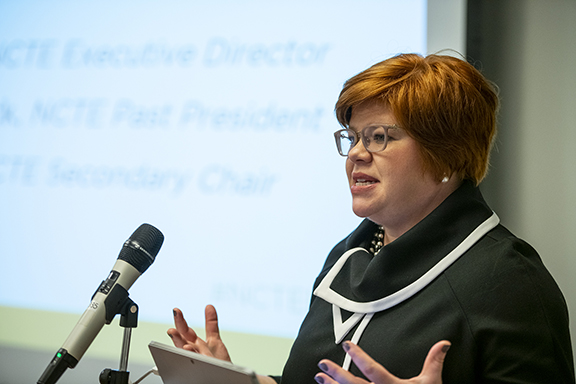 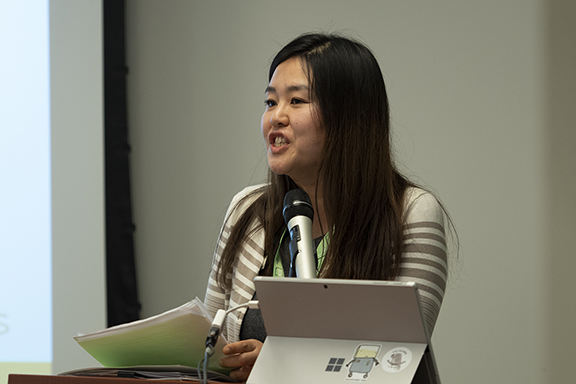 NCTE Kent D. Williamson Policy Fellow Grace Eunyhe Lee highlighted a visit she made to the Hill in October, explained how she made connections between her work as a teacher with NCTE position statements, and provided tips for how others can do the same. 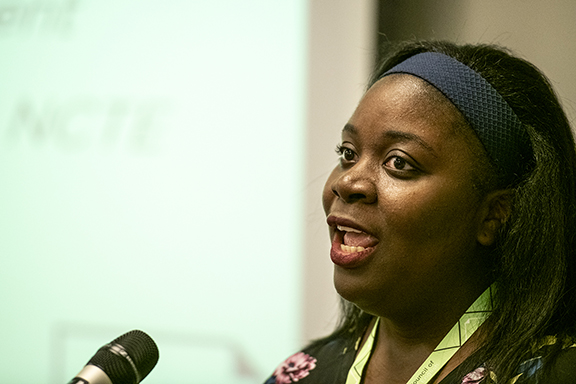 Ninth-grade English teacher Victoria Orepitan told an inspiring story of challenging inustice in her community in her presentation, Finding Your Voice: A Censorship Story. Orepitan was awarded the NCTE Intellectual Freedom Award for publicly opposing her district’s ban of Angie Thomas’s bestselling novel, The Hate U Give. 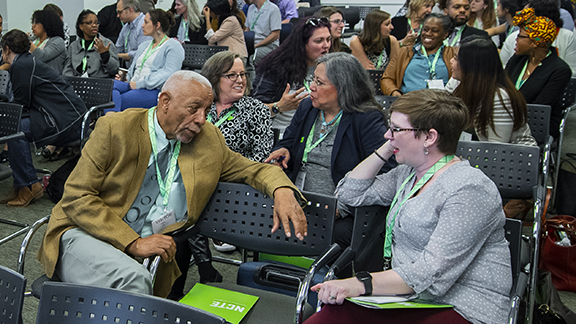 Attendees practiced the conversations they’d have with legislative offices. They also had the opportunity to make connections with new colleagues from 26 different states. Here, Dr. James Hill (GA) talks with Danna Pearsall (KY). 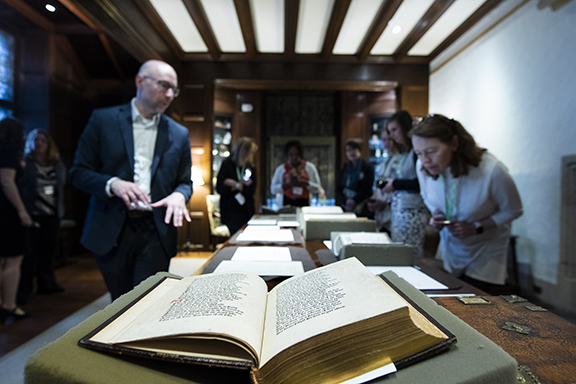 On Monday night attendees enjoyed a meal in the historic Folger Shakespeare Library. Before the dinner they had the opportunity to browse rare books from the collection, including first folios. 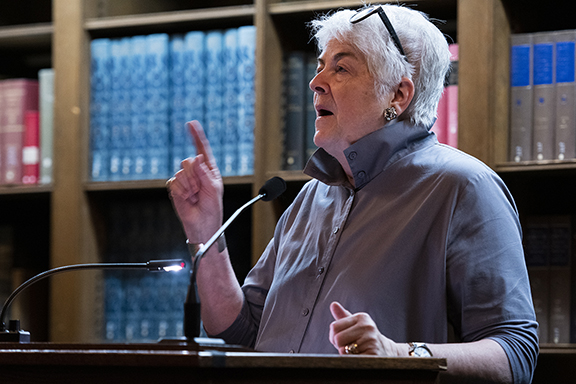 Former high school English teacher and founding director of education at the Folger Shakespeare Library, Peggy O’Brien welcomed guests and reaffirmed her commitment to teachers and to “inventing and reinventing Folger Ed” to keep up with what teachers and students need. 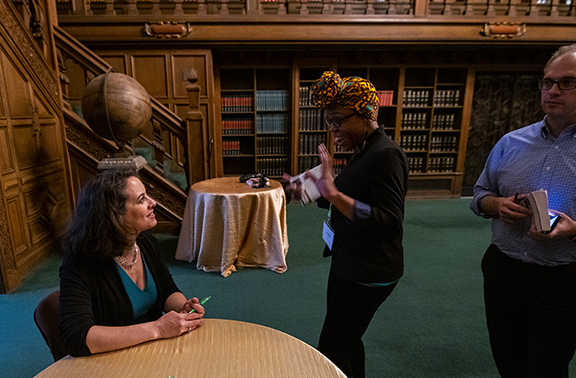 A high note of the evening at the Folger Shakespeare Library was the keynote presentation from Laura Wides-Muñoz, based on a new book that is the result of her nearly two decades of reporting on immigration, politics, and policy: The Making of a Dream: How a Group of Young Undocumented Immigrants Helped Change What It Means to Be American. 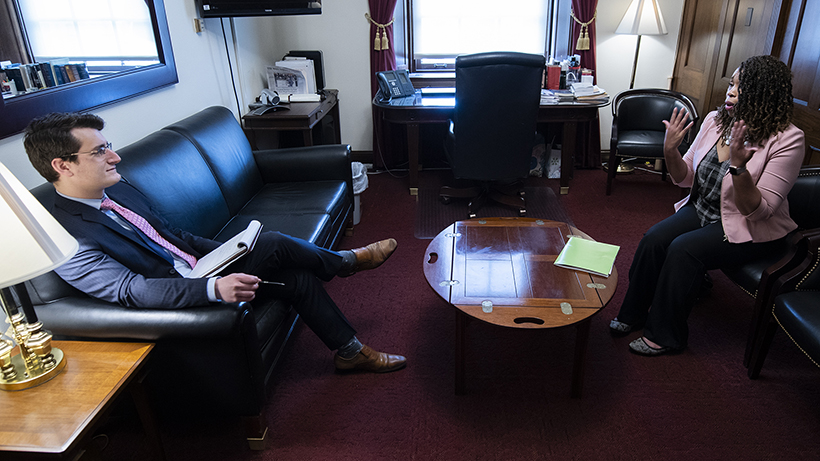 Naderia Wade meets with a legislative staffer from the office of her representative Rob Woodall. She and Rep. Woodall have kept in contact since she first visited his office for the Advocacy and Leadership Summit last year. 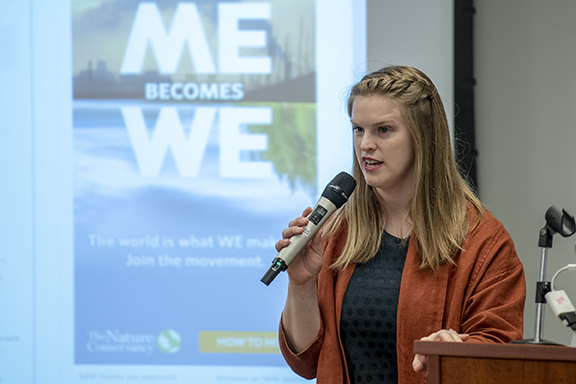 Award-winning NPR reporter and editor Elissa Nadworny outlined some of the current themes she’s working on and encouraged attendees to suggest ideas they’d like to see covered. What is the Leadership & Advocacy Summit?

This event is FREE to all NCTE members and includes:

Participants are responsible for securing their own lodging and transportation to and from the summit.

Location: Hall of the States

2:30–5:00 p.m.
Learning Sessions to Prepare for Advocacy on Capitol Hill and Beyond, Including:

12 p.m.–1:30 p.m.
Lunch and Keynote Address by Elissa Nadworny
Remarks from Ranking Member Virginia Foxx of the House Committee on Education and the Workforce Take a peek at what last year’s event entailed. We look forward to more great experiences this year!