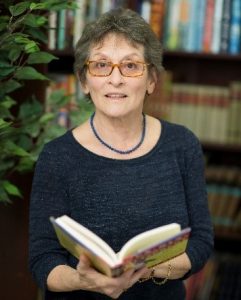 Urbana, Illinois, 10-16-17 – NCTE honors Joan Bertin of New York City with the 2017 NCTE National Intellectual Freedom Award for her courage in advancing the cause of intellectual freedom. She will receive the award at the NCTE Annual Convention in St. Louis, Missouri, in November.

During her recent 20 years as Executive Director of the National Coalition Against Censorship, Bertin tirelessly advocated on behalf of public school teachers facing censorship battles in communities throughout the United States.

NCTE Intellectual Freedom Center Director Millie Davis notes, “For two decades, Joan Bertin has stood up for teachers, their students, and the books they read in their classes. She has collaborated in this effort with intellectual freedom organizations, including NCTE, and organized forums for these organizations to both learn and exchange ideas about a wide variety of First Amendment issues.”

Bertin’s legal expertise about the First Amendment is undebatable. She has commented in front of the US House Judiciary Committee, has coauthored multiple book chapters and scholarly journal articles, and has contributed to many court briefs. She has argued against internet filters and in support of a student’s freedom of expression within the school, and she has stood beside teachers making difficult curriculum choices within communities where they are ostracized for choosing controversial texts. Bertin’s ability to understand complex legal situations and find reasonable solutions has made her a tremendous advocate for today’s English teachers.

Jon Anderson, Chair of the NCAC’s Board, upon learning of Joan’s recent retirement stated, “Her commitment to the ideals of free expression and access to information for all has been a hallmark of her tenure at NCAC and been instrumental in helping it grow it into an organization that is the go-to resource for anyone facing a censorship challenge.”

NCTE has enjoyed and benefited from working with Joan on many censorship cases and in some very difficult circumstances. She would mediate these contentious situations with compassion and a mindful adherence to what is best for the student reader. Her dedication to protecting the First Amendment, the rights of teachers and students, and the English classroom has been tireless.

Honorable Mentions for the 2017 NCTE National Intellectual Freedom Awards go to Christina Berchini of the University of Wisconsin in Eau Claire, and SAGA 6, a group of six students from Mount Horeb High School, Wisconsin, and their school and community advisors.