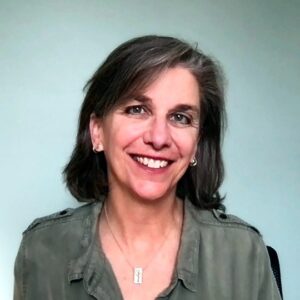 Tiffany Rousculp started her education at Mesa Community College before eventually graduating with a Master’s degree from USC in 1993.  She was hired by Salt Lake Community College that same year where she founded the SLCC Community Writing Center in 2001. Her book, Rhetoric of Respect, explored the rhetorical ecologies of the center. She then founded the SLCC Writing Across the College program in 2014 which she currently directs.

Tiffany Rousculp is an exemplary two-year college teacher and scholar, but what the selection committee especially appreciated about Tiffany’s nomination materials is the reach and impact of her programmatic work at SLCC. The committee is impressed with the innovative and transformational work behind SLCC’s WAC and writing center programs and recognize the vision, leadership, labor, and advocacy required to build and sustain such programs. SLCC’s Community Writing Center is a model for how college writing programs can serve and empower their communities through writing. Additionally, Tiffany’s efforts, which are nationally recognized, have elevated the two-year college voice in disciplinary conversations around writing programs. Tiffany’s work is an excellent example of TYCA teacher-scholar-activism.

The Nell Ann Pickett Service Award is granted each year to an outstanding teacher whose vision and voice have had a major impact on two-year college professionalism and whose teaching exemplifies such outstanding personal qualities as creativity, sensitivity, and leadership. The award, presented at the annual CCCC Awards Ceremony, consists of a plaque and free registration to that year’s conference.

The award is based on an application of no more than two double-spaced typed pages, a current vita, and the following criteria:

Nominations:
Any person may nominate a service award candidate who meets the qualifications by sending an application of not more than two double-spaced typed pages and a copy of the candidate’s current vita. The selection committee may request other supporting materials.

Nominations must be submitted electronically, no later than January 10, 2022, to tyca@ncte.org.

The TYCA Nell Ann Pickett Service Award is given to “an outstanding teacher whose vision and voice have had a major impact on two-year college professionalism and whose teaching exemplifies such outstanding personal qualities as creativity, sensitivity, and leadership.” Jeff embodies all of these qualities, and his impact on the organization is unparalleled. The committee particularly recognizes the long historic arc of Jeff’s commitment to and work for the organization. Jeff’s scholarly work, particularly his landmark history of TYCA published in TETYC, gave two-year college English teachers a sense of identity, a sense of who we are as a profession, and, later, as “teacher-scholar-activists.” Moreover, while serving as TYCA Chair, Jeff’s efforts to initiate the TYCA National Conference further developed the organization’s identity while also providing a means to move TYCA toward greater independence and future financial sustainability.