Esther O. Ohito for “‘The Creative Aspect Woke Me Up’: Awakening to Multimodal Essay Composition as a Fugitive Literacy Practice,” published in English Education in April 2020 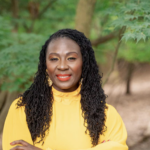 Esther O. Ohito is an assistant professor of English/literacy education at the New Brunswick campus of Rutgers, The State University of New Jersey; the inaugural Toni Morrison Faculty Fellow at the University of Massachusetts Amherst’s Center of Racial Justice and Youth Engaged Research; and the current Carnegie African Diaspora Fellowship Program Fellow at Maseno University in western Kenya. Esther’s research explores the poetics and aesthetics of Black knowledge and cultural production, the gendered geographies of Black girlhoods, and the gendered pedagogies of Black critical educators.

Award Specifics:
Letters of nomination may be made by any language arts educator or by self-nomination. Nominations for articles published between January 1, 2021, and December 31, 2021, must be received no later than January 31, 2022. Send nominations to ELATE Emig Award at elate@ncte.org. Winners are notified in June and announced at the NCTE Annual Convention.