All students have the right to materials and educational experiences that promote open inquiry, critical thinking, diversity in thought and expression, and respect for others.

NCTE offers advice, helpful documents, and other support to teachers faced with challenges to texts (e.g. literary works, films and videos, drama productions), to student writing, or to teaching methods used in their classrooms and schools.

To report an incident use our Report A Censorship Incident Form. 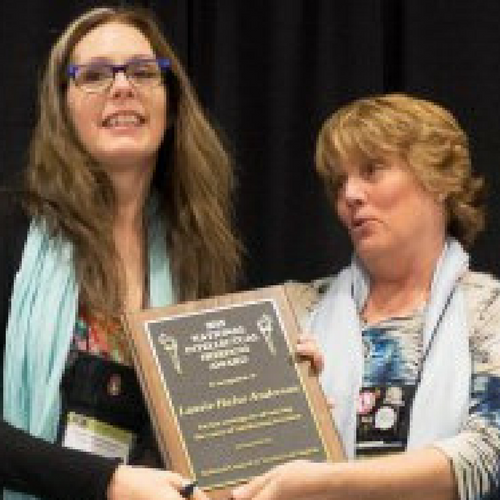 Thank you very much for this wonderful award! As a child, I was frequently told to shush my mouth and to stop asking questions. Receiving this honor for speaking my truth from an organization I value so highly is incredibly satisfying and a delight.

Recognizing the significance of intellectual freedom is more important than ever, now that America is finally entering her adolescence. Our nation was founded on the dreams and promises set forth in documents like the Declaration of Independence and the Constitution. These dreams and promises were restricted, expanded, and codified by later generations.

The two greatest promises that America made to herself and to her children were that all people are created equal and that Americans are granted the rights to think, to speak, and to write what we want. We are according intellectual freedoms that are astounding and rare when viewed through the long lens of history.

Without our intellectual freedoms, we will never be able to fulfill the glorious dream of equality, or the promise of life, liberty, and the pursuit of happiness for all of our people.

I see America as entering her adolescence because that is the time of the most intense search for identity. It’s also when you have the fire in your belly to fight against hypocrisy and injustice. Intellectual freedoms are necessary for those battles.

Historians are charged with documenting the progress and the backsliding of American liberties. This week brought political leaders issuing ignorant calls to reject refugees and to register people based on ethnicity or religion. The wonderful energy and progress of the past year’s #BlackLivesMatter movement and the immoral and dangerous backlash to it offer the latest proof that we need to do a much better job teaching our history.

Artists – writers, poets, painters, musicians and all the rest – we are called to do more than simply document or analyze. We’re called to dream, to lead, and to create boldly. We must speak truth to power, comfort the afflicted, strengthen the disenfranchised, and ensure that our work reflects the now in all of its glory and horror. Then we must imagine the next reality, the America that truly welcomes and cherishes all of her children.

Those of us who create for young readers know that our freedoms to think, speak, and write cannot bear fruit unless America respects the intellectual freedom of educators as well. Despite the corporate and ideological forces determined to handcuff your ability to open hearts and enrich minds, you are still in the classroom. You continue to do the work of angels and fulfill the promise of our country.

To be honored by you for speaking my mind and writing my truth is a remarkable gift. I thank you for this from the bottom of my heart and I promise to keep speaking up.

The materials below have been identified by teachers as most useful in preventing and combating censorship.

Gives model procedures for responding to challenges, including “Citizen’s Request for Reconsideration of a Work.”

Guidelines for Selection of Materials in English Language Arts Programs

Presents criteria and procedures that ensure thoughtful teacher selection of novels and other materials.

Guidelines for Dealing with Censorship of Instructional Materials

Explains why rating books, or ‘red-flagging,” is a form of censorship that schools should not practice.

Explains why classroom libraries play a key role in providing access to books and promoting literacy. States NCTE’s support for efforts to provide teachers with the ability to exercise their professional judgment in developing and maintaining classroom libraries.

Rich resource section included table of contents of NCTE’s Rationales for Commonly Challenged Books CD-ROM, an alphabetical list of other rationales on file, the SLATE Starter Sheet on “How to Write a Rationale,” and sample rationales for Bridge to Terabithia and The Color Purple.

NCTE Beliefs about the Students’ Right to Write

During this era of high-stakes testing, technology-based instruction, and increased control over students’ expression due to school violence, students’ right to write must be protected.