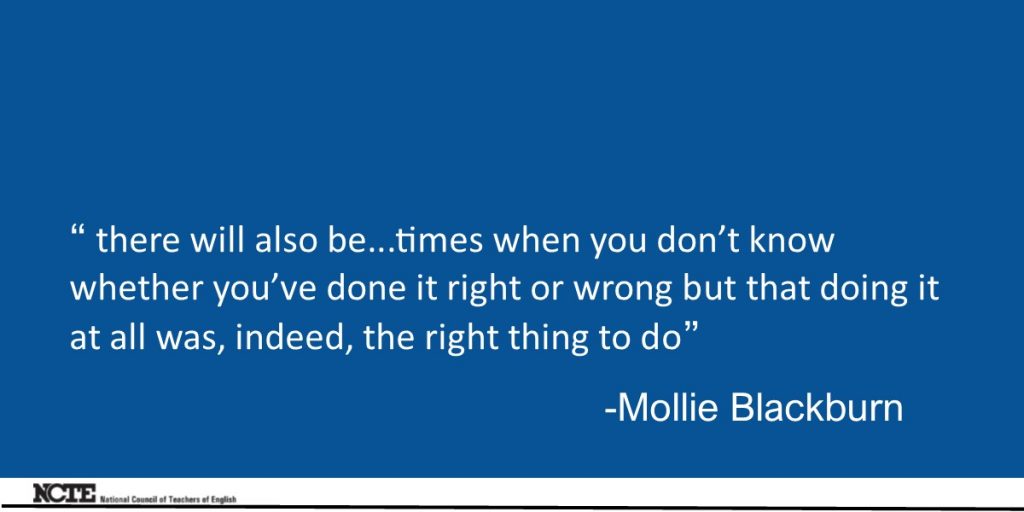 This post is written by NCTE member, Mollie Blackburn.

I am one among many who have called for bringing LGBTQ-themed literature into English language arts classrooms and queering literature already there. By queering I mean interrogating the notion of normal, particularly relative to sexual identities and gender expressions, but also related to broader notions like family and friendships. Oftentimes these two suggestions get pulled apart, as if teachers can or even should do one or the other, but I think they go hand-in-hand. This is becoming increasingly important since more and more people, particularly young people, are rejecting dichotomous experiences of sexuality and gender, among other kinds of identities. Not to say they use this terminology, but they reject the idea that gay people are one sort of way and straight people are another, and they reject the idea that girls like particular things or people and boys like the opposite. Some of them even reject the idea that they themselves are only gay or straight or only girls or boys. For some this means they identify as bisexual or androgynous, but for others it means something more multiple and variable, something more fluid. If we, as teachers, want students who experience sexual identities and gender expressions in these ways to recognize themselves in the classrooms, and if we want students who are more normative in their sexual identities and gender expression to be understanding of a broad range of people, reading literature that represents LGBTQ people and invites readers to imagine a wide array of possibilities of sexual identities and gender expressions is a promising approach.

There is new literature coming out every day, and certainly not all literature will work well in all educational contexts, but for me, some of the texts that have worked really well are:

So, I encourage you to go ahead and get started, reading, thinking, feeling, teaching, talking. Know that this work, these conversations, are complicated. There will be really challenging, difficult parts to them, times when you feel like you’ve done it all wrong; but there will also be really challenging, powerful parts to them, times when you don’t know whether you’ve done it right or wrong but that doing it at all was, indeed, the right thing to do.

Mollie Blackburn is a professor of teaching and learning at the Ohio State University. Her research focuses on adolescent literacy with particular attention to lesbian, gay, bisexual, trans, queer, and questioning (LGBTQ) youth and the teachers who serve them. Mollie is the author of  “Risky, Generous, Gender Work” (Research in the Teaching of English, February, 2006) and the winner of the 2005 Alan C. Purves Award.