Just Prison: Rethinking the Boundaries of Bars in the Age of Mass Incarceration - NCTE
Back to Blog 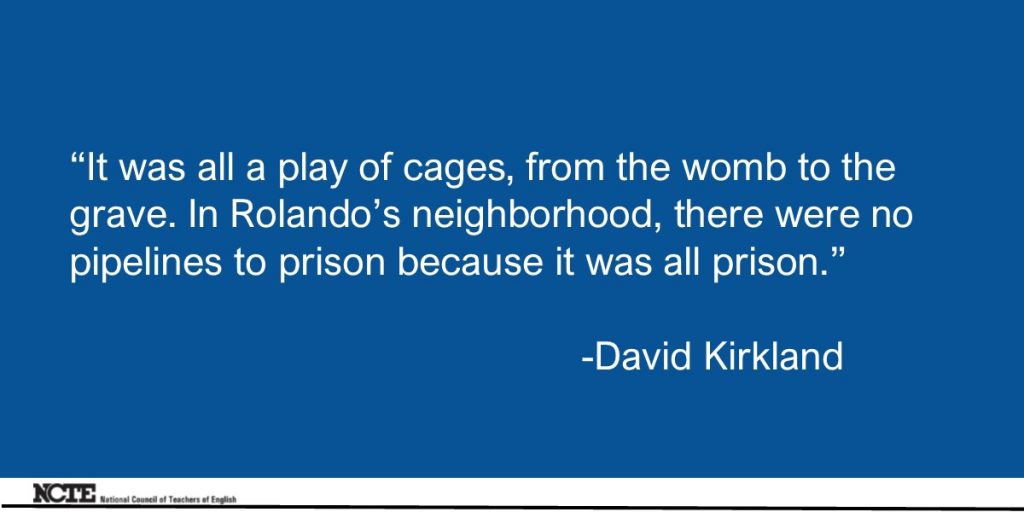 This post is written by NCTE member David E. Kirkland.

Rolando Cooper [a pseudonym]is the type of kid who epitomizes what we mean when we talk about the school-to-prison pipeline.  Rolando attended a school fitted with metal detectors and barred windows. The doors of his school locked automatically so that no one on the outside could enter. The same doors were also chained shut so that no one on the inside could leave too easily.

Rolando had been suspended five times from his school during his sophomore year for offenses ranging from not taking off his hat when asked by a teacher to missing too many days (a punishment which to me felt kind of oxymoronic, but carry on). Rolando was smart. He was street smart. He could break down the logics of hustle like an expert math teacher explaining complex concepts in calculus. I can recall the one time he reprimanded students in one of his English classes for reading books that “caged their minds.” He was prone to these kinds of talks—conversations of theories and ideas so acutely fashioned that it wouldn’t be hard to imagine Rolando reading the likes of Marx or Fanon. Thing is, Rolando could barely read, at least not in the ways that we value in English language arts.

Indeed, before he was locked up, Rolando was on a path to leaving school, for he was confined both physically and ideologically by barriers so stable and firm that most members of his community waste away between various boundaries of carceral confinement with little chance of escape. In Rolando’s community—at least in his neighborhood—crime was typical as was the desperation of people who did not always eat regularly or enjoy proper access to medical care. On Rolando’s block, close to 80 percent of male residents were unemployed. It was not uncommon for young mothers to be high school age and single. Few of the community members felt supported or safe. And even fewer felt that they lived in a place where freedom reigned. For them, the American Dream was elusive. The American Nightmare was all there was.

The realities of this nightmare could be seen in the decaying properties that littered the crumbling street. Many of the homes were barren and eroding. Some gutted by fires, and others diseased with neglect and the thumbprint of poverty. The homes that were still standing were wrapped in layers of metal. Fences that mimicked walls comprised a first barrier. The other barriers were the barred windows and doors, vaulted by heavy locks and in some cases even chains. In order to secure safety, the people locked themselves in with hopes of locking others out.

In Rolando’s neighborhood, men disappeared like shadows into the night, or like the Black and Brown boys who vanished routinely from the city classrooms. Some never returned, expelled into a fog that leads to the other side of life. Others fall prey to a dance of bars, ushered into revolving patterns of submission that exchange one form of captivity for another. It was all a play of cages, from the womb to the grave. In Rolando’s neighborhood, there were no pipelines to prison because it was all prison.

From home to school to an eventual county jail, Rolando’s life was defined by bars and barriers, boundaries and preimposed borders—multiple states of confinement that were mutually reinforcing. Sadly, Rolando’s story is far from unique. For approximately 100 million Americans, there is no school-to-prison pipeline. There is just prison. This is the unfortunate state of being that uniquely affects our most vulnerable citizens, those who exist alongside us without much freedom in school or at home.

Compared to where and how they lived previously, individuals like Rolando, ironically, feel some sense of freedom in prison. According to Rolando, “At least in prison, I eat. I got a bed and a home. I don’t have to worry about the rent. The police [prison guards] respond when there is trouble. Shit, it’s better here than where I live.” His analysis is, of course, as striking as it is heartbreaking. He continued:

“I went to the dentist for the first time behind bars. We ain’t have no [health] insurance at my mother’s house [to go to the dentist]. So I never went to the dentist before . . . Don’t get me wrong, it ain’t heaven in here [jail]. I mean . . . I miss my family and friends and stuff like that. But it ain’t heaven out there either. I’ve seen so many people die, yo. People get hurt on the outside just like they do on the inside. So what’s the difference? It was only a matter of time before it would be me. I mean . . . I be scared whenever I leave the house. It got to a point [that] I [began] to have [sic] nightmares that someone was gonna break into my mom’s house and kill all of us. My first night in here [jail], I got my first good night of sleep in a long time.”

Rolando’s fear wasn’t too off base. Less than a month after he and I had the above conversation, one of Rolando’s friends was killed at home, along with his friend’s mother. Apparently, Rolando’s friend’s mother had a boyfriend who made bad company with some bad people, whom he owed. Whatever the case, someone came looking for the mother’s boyfriend. And while they didn’t find him, the killers did find Rolando’s friend and his mother. They tied them naked to chairs and shot both of them five times in the head and chest. Whoever killed them understood well the ambiguities of Rolando’s neighborhood. The place was a snare—perhaps less safe than prison but no less confining.

In recent years, much has been made of the so-called school-to-prison pipeline. In fact, recent NCTE blog posts have fruitfully advanced this important issue. However, in recent months, my own work and understanding of the school-to-prison pipeline have shifted somewhat as my analysis has become much deeper. In analyzing the relationship between mass suspension and mass incarceration, I too have found a relationship between the schooling and jailing of our most vulnerable citizens. However, in analyzing the conditions under which our most vulnerable citizens live, I am beginning to find that there are also other relationships that are important to notice, such as the relationship between the growing wealth gap and mass incarceration, residential segregation as a form of internment, and violence and fear as continuous states that span across home, school, and prison for so many vulnerable people.

Such citizens find themselves perpetually locked into labels that, like their physical living conditions, reinforce their internment at all facets of confinement, from one institutional margin to another, from the brims of birth until the edges of death. There are the qualitative realities of communities beset with poverty, which make up about a third of the American society and function and act much like prisons with and without bars. Hence, for many Americans, there is no school-to-prison pipeline. Again, there’s just prison—the varied states of incarceration existing with different but mutually reinforcing apparatuses for confinement. Each swells and shrinks, tightens and loosens, based on individual circumstance.

The reality of this should be heartbreaking but also groundbreaking for us in education because the extent to which we can truly understand the crisis of incarceration will determine our ability to resolve it. Sadly, we have spent years, if not decades, searching for the wrong kind of pipeline, a thing that may not even exist. What if we moved beyond our pipeline quest, away from understanding vulnerable schools or vulnerable communities as much different than prisons, to understanding them as forms of imprisonment? Based on this latter logic, the quest evolves beyond a mission to dismantle an invisible system fitted between the school and the prison to a mission to dismantle the very apparatus of incarceration itself.

Within this logic, the work isn’t about dismantling pipelines from school to prison, but about dismantling prisons/imprisonment by erecting new pipelines from school to opportunity. Dismantling imprisonment (decarceration) would mean rethinking policies and practices within and outside schools that drive mass incarceration (within and outside schools). It would mean transforming communities and dismantling the intellectual/ideological bars that keep people confined within them. In English language arts, this work means locating classrooms as sites of freedom and opportunity, decarcerating the very space that confines and, thus, limits our thoughts, drives, and motivations. In this light, the goal of the school-to-opportunity pipeline in English Language Arts becomes more obvious: to teach English in ways that promote freedom and free-thinking individuals capable of transforming their communities and abolishing the multiple states of confinement that bind so many Americans within the fences of inopportunity.

David E. Kirkland is an award-winning author, activist, cultural critic, and thought leader. He serves as the executive director of the NYU Metropolitan Center for Research on Equity and the Transformation of Schools, and is an associate professor of English and urban education at New York University. He guest edited a themed issue of English Education on “Teaching English in a Sea of Change: Linguistic Pluralism and the New English Education” (2010). Dr. Kirkland can be reached by email at davidekirkland@gmail.com.