Where Do I Get My Ideas? - NCTE
Back to Blog

This guest post is written by author Marilyn Singer, who won the 2015 NCTE Excellence in Poetry for Children Award. 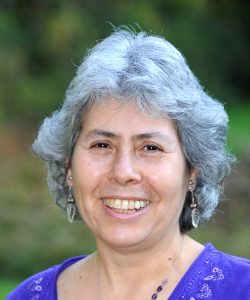 The snow monkeys at the Central Park Zoo.

The exhibit hall at an American Library Association convention.

My cat sitting on the living room chair.

What do these things have in common?  They all provided inspiration for several of my books.

Most writers I know are happy combinations of the sedentary and the peripatetic.  I am certainly in that camp.  I get some of my best ideas while sitting on my stoop or sofa in Brooklyn, New York.  I get others when I’m traveling or wandering about, keeping my eyes, ears, and even nose open (if you don’t believe me about the latter, take a peek at my book, What Stinks? about plants and animals that smell bad, inspired by the gingko trees dropping their malodorous nuts on my street).  I have a great sense of curiosity about the beings, behaviors, and situations I see, hear, and smell.  That curiosity leads to detective work, which in turn, leads to writing books.

The snow monkeys were responsible for my poetry collection A Strange Place to Call Home: The World’s Most Dangerous Habitats & the Animals That Call Them Home (ill. by Ed Young). So was Usher—not the singer, but an adorable Humboldt penguin I met many years before at the Rode Tropical Bird Gardens in Bath, England. Snow monkeys don’t live in rain forests, but on cold Japanese islands. Humboldt penguins are not found in Antarctica, but on the hot and dry coasts of Chile and Peru. These animals made me wonder how many other creatures survive and thrive in inhospitable environments. I put on my detective hat, learned the word extremophile, and produced a series of poems that became a book.

Conferences are great book nurseries. The wealth of literature on display at NCTE, ILA, ALA, BEA, and other conventions makes a writer want to … well, write. At one particular ALA conference, when I was strolling around the exhibit hall, checking out the forthcoming books, I noticed that there were plenty about Christmas, but none featuring New Year’s celebrations. Back at home, I checked out library catalogues and booksellers to reveal that there were very few New Year’s books, period. I knew that there’s a Jewish New Year, a Chinese New Year, and a Russian New Year, which are not celebrated on January 1. Could there be other celebrations at different times of the year? More detective work led to the discovery that some cultures celebrate in March or June or November—in fact, depending on the lunar calendar, there can be a New Year’s celebration every month of the year. I’m delighted to say that, as a result, next year, my poetry collection, Every Month’s a New Year (ill. by Susan L. Roth), will be published by Lee & Low.
And what about that chair-loving cat? She has the honor of inspiring a poetry form, the reverso. A reverso is one poem with two halves. You read the first half down as you would most poems, and the second half with the lines reversed, with changes only in punctuation and capitalization. That second half has to say something completely different from the first. When I saw my cat on her favorite chair, a little poem came into my head:

It got me so excited that I wanted to see if I could write more.  So I did.  They were on a variety of topics, but a number were based on fairy tales.  A wise editor suggested that I base the entire collection on fairy tales.  I did—and the collection became Mirror Mirror (ill. by Josée Masse).  Subsequently, I’ve written two more books of reversos, Follow Follow, based on more fairy tales, and Echo Echo, featuring Greek myths.

Editors have made many helpful suggestions and sometimes given me ideas for books, including my Tallulah picture books, about a young ballet student, and Rutherford B., Who Was He?:  Poems about Our Presidents.  I may never have come up with these concepts myself, and I thank the good folks who gave them to me.

Then there are the articles in newspapers, online, and on TV; the encounters with people and other beings; the day dreams, night dreams, and other fantasies that have led to more books and stories.  I could go on and on—but I won’t.  The point is, when folks ask the time-honored question, “Where do you get your ideas?” I can honestly answer, “Everywhere!”  I just need to go out or sit still to find them!

Winner of the 2015 NCTE Award for Excellence in Poetry, Marilyn Singer has written over 100 books in many genres.  She lives in Brooklyn, New York and Washington, Connecticut with her husband and several pets.