Across the Great Divide - NCTE
Back to Blog

The following guest post is by author Richard Wallace.  Wallace will be a keynote speaker at the Middle Level Meet-Up at the 2016 NCTE Annual Convention.

In 1967, several nights of rioting in the city of Newark, NJ, left more than two dozen people dead and as many as one thousand others in jail. It began with an incident of police brutality toward a black cab driver, which prompted what was expected to be a peaceful demonstration. The protest quickly devolved into widespread looting and violence.

This all took place almost literally in my grandparents’ backyard, but we might as well have been on the other side of the continent. Newark was a city unto itself; the impact of the riots on our nearby suburban town was negligible. I recall a few mumbled epithets from adults. And we never again went shopping in downtown Newark. The wall dividing my culture from the city’s grew a lot higher.

But the turmoil that altered the lives of thousands in the city had virtually no immediate impact on me, a naïve kid living a few miles away. If there was an opportunity for educators to discuss, inform, or lament the situation with their students, it certainly wasn’t taken in my all-white school.

I would have benefited from some context, some recognition that the origin of that riot wasn’t lawlessness, but a reaction to an incident of injustice. I figured that out years later. The violent reaction that followed the incident was not justified either, but in the versions I heard there was only one side to the story.

That leaves me wondering about how educators are handling classroom discussions of social justice movements today. During a conversation about the book (Blood Brother: Jonathan Daniels and His Sacrifice for Civil Rights) at last summer’s ILA conference, some teachers said that they’d like to discuss Civil Rights history with their high school students but didn’t feel sufficiently informed. My reply was, “Why not learn about it along with them?”

I’d love to hear from the educators who are discussing these concerns with their students.

Kids struggle with how they can get involved in social justice movements. Voting rights issues, environmental concerns, Black Lives Matter, and LGBT efforts demand action from young people. They read about these issues every day on social media. And while they might not articulate it, I believe that most would welcome frank discussions with educators about how they might process and proceed. 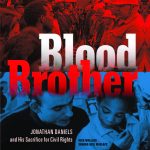 Rich Wallace and his wife Sandra Neil Wallace are the authors of Blood Brother: Jonathan Daniels and His Sacrifice for Civil Rights (Calkins Books, 2016). The book tells the little-known story of a young seminarian who answered Martin Luther King Jr.’s 1965 call for white, Northern clergy to travel to the South to work for voting rights. Unlike most of the new arrivals, Jonathan Daniels stayed on long after the Selma-to-Montgomery march. It eventually cost him his life—he was gunned down by a racist part-time deputy while shielding a teenage demonstrator.