Products of Personalized Learning - NCTE
Back to Blog

This is the challenge that was stuck in my head going into this past school year.

In two distinct iterations, second and fourth quarters, our class focused on project-based learning driven by student interest. Students made significant choices about content and product. I adjusted the process to ensure they continued to grow their skills toward and beyond the standards. There were many positives, but what has also stuck with me are the products — what they did, what they made, what they experienced, what they shared. I think that’ll be what sticks with the kids, too.

There’s an ugly myth about teenagers — that they don’t care about the world outside of their social circles. While they may lack in deep background knowledge or a broad understanding of the world that comes with sustained attention, I’ve found students to be deeply passionate and thoughtful in a refreshing and hopeful way. This year’s group selected the topics of civil rights and race, criminal justice, LGBTQ rights, and refugee justice as topics of interest for the second quarter. Students pursued particular lines of inquiry of their own choosing. The culmination of their research, which included interviews, was the execution of an awareness campaign and/or a service project based on their learning. And the students were incredible! 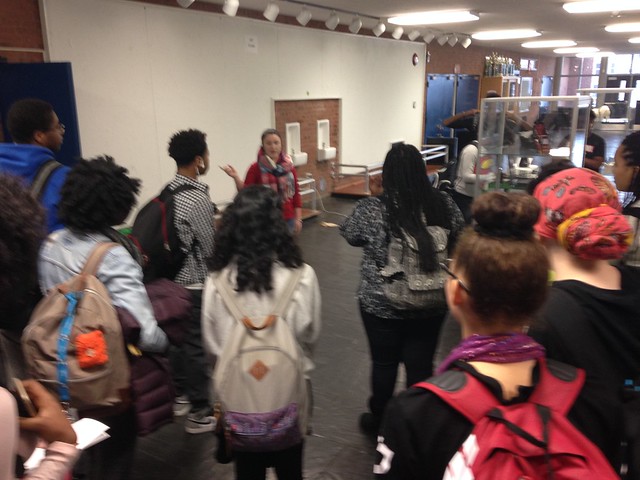 Students were also polled on what essential questions they found most appealing. At the heart of the most popular questions were issues of identity: How do we form and shape our identities? What turning points determine our individual pathways to adulthood? In a culture where we are bombarded with ideas and images of “what we should be,” how does one form an identity that remains true and authentic? We broke this project into two components — one in which students explored their own identity and one in which they explored by learning from others.

For the self-focused piece, students wrote This I Believe essays — deep explorations of how our identities form and lessons internalized from those who influence us. Others expressed themselves through prose. These spoken word performances were so powerful — revealing, humorous, empowering. And, for students for whom an issue was closely linked to who they are, they expressed that through the Letters to the Next President project.

It’s always powerful to create experiences where students really become excited. This happened as students embraced the opportunity to listen and learn from others. Some interviewed multiple people — peers, family, strangers — and presented their findings in Humans of New York style, and spoke to the threads of similarity and defining differences in what they heard. Others used the StoryCorps app to have a deep conversation with someone important in their life — a teacher, a family member, or a peer. They shared an important excerpt and reflection on the experience. Finally, a few students took the opportunity to create a vlog-u-mentary with their own commentary, making connections between video interviews.

It’s not easy, obviously, to be agile with content and to design projects aligned to students interests with room to be personally flexible, but the payoff is tremendous. To see students excitedly, authentically engaged in their work, overcoming vulnerability to be filled with pride in sharing their learning and influencing their world, is priceless.

It’s what school should be.

Sean McComb teaches English at Patapsco High School and Center for the Arts in the Baltimore County Public Schools System. Sean also supports the development of teaching and learning for Baltimore County’s STAT Initiative. He is affiliated with the Maryland Writing Project, NCTE, Learning Forward, National Network of State Teachers of the Year, and ISTE. Sean is the 2014 National Teacher of the Year and a Teaching Channel Laureate. Connect with Sean on Twitter: @Mr_McComb.