Teaching Controversies: The Letter to the Editor - NCTE
Back to Blog 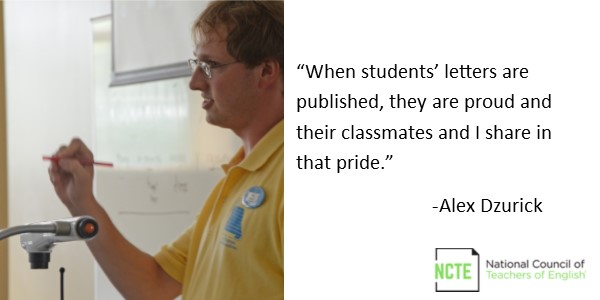 This post is written by student member Alex Dzurick.

I teach an introductory writing and public speaking course for first-year college students. We focus heavily on current events and analysis of public issues. Students spend much of the fall semester engaging with a current controversial issue of their choice – anything from gun control, to Common Core, to animal captivity. As part of the process, we ask students to produce both an informative essay and a persuasive essay on their topic.

Also, to foreground the idea that our students are citizen-communicators, each of them is assigned to write a ‘letter to the editor’ in response to a recent article on their topic. Students monitor media sources related to their topic and find an argument to which they would like to respond. I cover in some detail the ethics of participating in a public conversation, such as giving credit to sources of information, and go over the structure of a successful letter:

By this point, students have been working hard on their persuasive projects, and have amassed lots of knowledge of their chosen issue. The letter to the editor assignment gives them the chance to use that knowledge outside of the classroom and start to become active participants in the conversations surrounding their issue.

I think it is important to note that this same process can be used in other contexts and courses. I have presented this structure at a science education conference as a way to bring writing into the science classroom when discussing issues such as green energy, autonomous cars or vaccines. Consider the possibilities of integrating language arts (writing/editing), social studies (civic engagement) and science (topics) courses into this assignment to help students learn all three sets of skills at once.

A note of caution: the traditional letter submission process has become less standard. Several students report that they cannot find a formal letter submission process for their chosen source. Instead, students are sometimes able to email the authors of the pieces they are responding to, often sparking a brief email exchange. Alternatively, students have posted their letters as online comments (and they are usually the most erudite comments in the thread!).

Regardless of how they submit or what controversy they chose, this letter is for many students their first chance to share their writing and research with someone beyond their teachers and classmates. By framing this assignment as a short contribution in relation to their larger formal essay, students report little apprehension in completing it. When students’ letters are published, they are proud and their classmates and I share in that pride. After all, we are all on the journey of becoming better writers and communicators together!

Alex Dzurick is currently a graduate student in educational policy studies at the University of Illinois at Urbana-Champaign and previously spent time as both a formal and informal science educator in Missouri. At Illinois, Alex teaches undergraduate communication courses and is actively involved in the sustainability, theatre and LGBTQ communities.