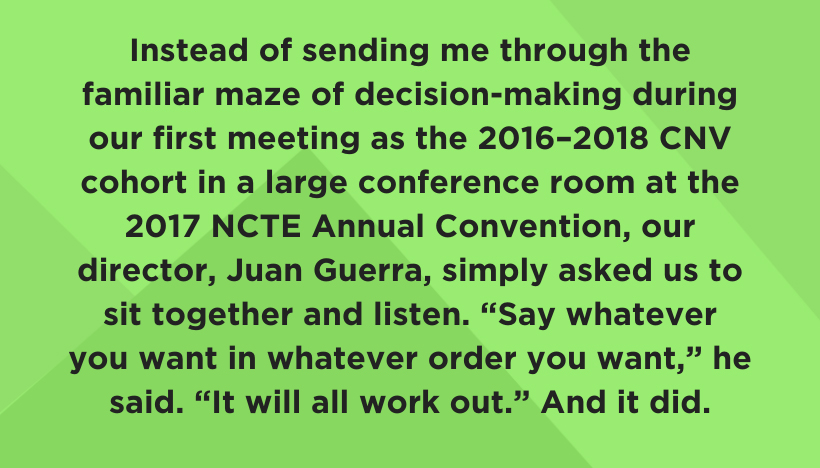 It’s no secret that academia can be a marginalizing and hostile space for people of color. Although there is extensive work citing various forms, instances, and motivations for this marginalization, for me, this struggle has always come in the form of failing (or fearing failing) to fit into standards and categorizations that were inherently built to displace non-white academics with non-white experiences. I never quite “fit” into definitions and trajectories for what an academic is “supposed” to be. Living outside the boundaries of what is deemed academic language through my linguistic and cultural background, and having to move through timelines other than what is deemed “appropriate” in academic trajectories, I’ve always felt a need to justify my decisions, positionality, and even sometimes my existence within academic spaces.

This was not the case during the first meeting with my 2016-2018 cohort in NCTE’s Cultivating New Voices among Scholars of Color fellowship program. Like many of my peers who’ve been through many years of school, I’ve experienced countless “introductory” or “icebreaker” meetings in a wide range of contexts. Typically, as many of us have experienced, these introductions consist of some type of instruction (“Tell us your name and where you’re from,” “Tell us your grade and what you did for fun this summer,” “Tell us your school and your research interests”) followed by a set of responses homogenous both in their tone and content (“My name is ____ and I’m from ____”). For me, these introductory sessions become an exercise in assimilation as I struggle to decide just how much of myself to reveal in a specific context:

How do I pronounce my name to make these people comfortable?

Do I say I’m “from” my Florida home in the US, or do I say I was born in Bolivia, preparing myself for the “oooohs” and “aaahs” and follow-up questions that often follow?

Do I tell them that “fun” for me this summer were the moments between shifts at the grocery store, or do I make up a vacation from my vault of imaginary getaways?

Instead of sending me through the familiar maze of decision-making during our first meeting as the 2016–2018 CNV cohort in a large conference room at the 2017 NCTE Annual Convention, our director, Juan Guerra, simply asked us to sit together and listen. “Say whatever you want in whatever order you want,” he said. “It will all work out.” And it did.

The room immediately turned into a community of people who “get it”—who came together with the intention of listening rather than performing. During this CNV introduction, the new fellows introduced themselves by sharing anything that came to mind—stories of past experiences, struggles, successes, and future aspirations. These stories were met with nods and sighs and tears and smiles, both from other new fellows and from the mentors who paved the path that led us into this room.

It was during this introductory meeting that I met my mentor, Michelle Hall Kells, who, after listening to me talk endlessly about my anxieties and back-up plans for navigating the tenure track, simply said, “Laura, you have to start preparing for excellence. Stop preparing for worst-case scenario and realize that best-case scenario is what is going to happen. You’ve earned it.”

Michelle’s words are still echoing in my mind weeks after the first CNV Institute, along with the words of my CNV peers, who continue to encourage me and keep me grounded. As we prepare for the second CNV Institute in February, I’m continuing to plan for “best-case scenarios” in my career, knowing that my role in this game is no longer that of assimilation, but rather that of excellence in the footsteps of my CNV family.

Laura Gonzales is an Assistant Professor of Rhetoric and Writing Studies in the Department of English at the University of Texas, El Paso. Her research focuses on intersections of technical communication, translation, and community activism.