Linguistic Prejudice and the Ultimate Public Good - NCTE
Back to Blog 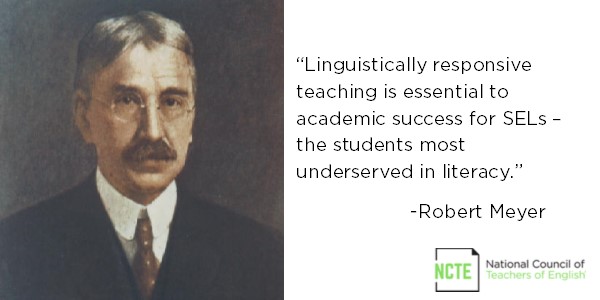 In her recent New York Times Magazine article “Have We Lost Sight of the Promise of Public Schools?” Nikole Hannah-Jones frames the current fight over school governance in the history of public education as the ultimate social contract and, at the same time, unending efforts by some of America’s wealthy to disengage from it. She cites the segregation academies of the 1950’s as the origin of today’s voucher movement and as an example of how, for many, racism undermined the public good.

Racism has long undermined equality and justice in public education for far too many people, as has, in a much more insidious way, linguistic discrimination. In her landmark book, English with an Accent, Rosina Lippi-Green defined it eloquently: “Accent discrimination can be found everywhere in our daily lives. In fact, such behavior is so commonly accepted, so widely perceived as appropriate, that it must be seen as the last back door to discrimination. And the door stands wide open.” Dr. Wayne O’Neil also described “linguicism” in a 1997 Rethinking Schools article as the last “legitimate” prejudice and as a “thinly veiled racism.”

This form of racism is still prevalent today throughout our education system and in every part of the country. It expresses itself in the form of low expectations for children who are Standard English Learners (SELs). It is made manifest through correctionism, which has crippling consequences for students at every academic level, perhaps especially so for the more than five million SELs who either read at a below basic level or who are floundering their way through the primary grades now on that trajectory. This situation was essentially the same twenty years ago, and it will be the same twenty years from now unless something changes pedagogically.

Academics have investigated the relationship between SEL language differences and literacy outcomes for fifty years. They have implored educators (e.g., Lily Wong Fillmore and Catherine E. Snow’s “What Teachers Need to Know about Language”) to incorporate this knowledge into the classroom, yet linguistic understandings are still only just beginning to inform instruction. One would think that by now school district administrators would have the legal protection necessary to support SELs in educationally sound ways, certainly in the form of an SEL definition in education policy. But this has not occurred. And without that protection, district administrators seem powerless to do anything.

Linguicism has also not been explicitly confronted by groups advocating for education as a civil right. This is in effect helping prevent many of the students most underserved in literacy from becoming capable of fully participating civically and economically in the great American experiment. I believe the reason for this is that most adults, regardless of ethnicity, have been conditioned with some form or another of bias about the way SELs speak, write, and communicate, and that this makes conversations about language differences extraordinarily difficult to initiate.

If policymakers, school district administrators (and boards), and organizations won’t address this untouchable subject, who can? Who will? Hannah-Jones concludes in her article that a democratic response to Betsy DeVos’s policies has the potential to reaffirm the public ideal – individual by individual. Perhaps institutionalized linguicism will end only as each educator explores his or her own personal biases. Promisingly, this grassroots movement is in evidence at NCTE. This is the only place in regular education where it seems to be happening. ELA teachers are discovering (and reporting at conferences) educationally sound ways to better meet the instructional needs of SELs. School administrators need to know about this because linguistically responsive teaching is essential to academic success for SELs – the students most underserved in literacy. Only such innovations in pedagogy can help educators finally close our long-standing achievement gaps.