Professing While Teaching - NCTE
Back to Blog 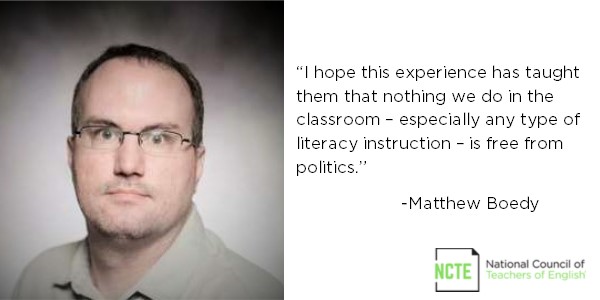 As is usual in first-year composition, I assigned a research project to my students. In a course I titled The Rhetoric of Higher Education this semester, I proposed to my students that they embark on a research agenda of an issue affecting higher education.

Some of the perennial subjects showed up in student choices: student loan debt, tuition increases, paying student athletes, and “safe spaces.” These were all subjects I put on the syllabus. I listed on the syllabus other issues such as academic freedom, the role of the humanities, and the ways in which colleges have branded themselves. I provided a few readings for each topic, and we spent a week discussing each subject. Many of these sources showed up in the final papers, though many students had other, better sources.

I also strategically scheduled a week on the syllabus for an issue I have been involved in: the fight to prevent allowing guns on college campuses. I deliberately put that issue on the syllabus on the same day I also assigned the first step in the research process, hoping students would claim that issue.

For two years I have written (most recently here) and spoken against bills in our state legislature that would give those age twenty-one and older permission to carry a concealed, permitted weapon on campus, albeit in limited areas. That advocacy has gotten me placed on a conservative “professor watchlist” (I won’t link to it), some indirect pushback from my administration, and not a few insulting online comments.

My syllabus scheme was somewhat successful. About twenty of my sixty students chose “campus carry” as their research project. Why did they? In my class, at my university, and in my state, the overwhelming majority of students (not to mention faculty and staff) are against guns on campus. So I assume that those who chose to write about it did so because they share that opinion. But a few students chose to argue in favor of the idea. In Georgia we have a strong “gun culture” and a state law that allows concealed weapons in most public places, though not college campuses.

Of course, the question of grading comes up. Do those students writing in favor of guns think I am biased? I am never sure. I probably hold those who agree with me to a higher standard, checking more closely their sources and arguments even in the last, rushed days of the semester.

Some might argue that if I am doing my job correctly, it doesn’t matter whether students think I am biased. To these people, the question is whether I can set aside my personal bias to grade fairly, given the assignment and expectations for citations and conclusions.

But this issue is not merely one of personal bias for me. I cannot set aside my conclusion that campus carry is dangerous. And what is fair here? In student assessment, it is not a simple matter of presenting evidence to back up conclusions. It is also a matter of credibility, audience, and ethics.

For example, students in my class who favor campus carry, echoing sources they have read, point out that my school already has guns (we have the usual campus police and we are a military school, though my particular campus does not house military personnel). They transition from this point to champion campus carry by concluding we should not fear guns at all because we don’t fear those other guns. Yet this is a weak argument because it is a non sequitur. The comparison is not apples-to-apples, because military and police weapons are handled by well-trained individuals and securely locked away when not. I discount the paper that makes this argument.

On the other hand, those students who agree with me and who quote my work in their essays sometimes don’t quote me well, and I discount them for that. And here “well” means using my information to make their own claim, not merely summarizing my points.

Overall, in class I seek to give all students the opportunity to practice their thinking and show them ways to do that well. In doing that through the topic of campus carry, I aim to provide national context (each state’s version of this bill is different), historical context (the rise of such bills since 2008), and the importance of stakeholders and audience (I stress to students that I am their reader, not their audience). I hope this experience has taught them that nothing we do in the classroom – especially any type of literacy instruction – is free from politics.

This assignment was a teaching moment for them but also a learning moment for me. I continually have to learn how to be political without, well, being political. The question for me this semester has been how to balance my advocacy and my teaching. And whether “balance” is the right metaphor. I don’t feel I have to mention a claim from “each side” when I bring up the issue.

But I did make sure that the readings I included on the syllabus for the week we spent examining campus carry were about equal in number for each side. While I did not fact-check every claim in the pro-gun sources, I knew many would be rebutted the next class period by readings from those against guns on campus. I also did not disparage the pro-gun sites in general. (I used links from the NRA and groups committed to campus carry in my state. On my side, I used some of my work, the governor’s veto from last year’s version of this bill, a survey from another university conducted by the student government association that showed 70% opposed, and a tweet from REM front man Michael Stipe, who was among a handful of celebrities from Georgia to announce their opposition.)

I made clear my position in class while also suggesting that those on “the other side” were sincere and informed, to be taken seriously. Yet not every claim made in this debate is accurate and ethical. A question for my students is who to believe on this issue. There are many voices and I am one, but I am a voice with built-in credibility and authority. And so with great power comes great responsibility. In that vein, I invited two state legislators into my class – two gun rights advocates who not only voted for the bill but who also represent my students and me.

I decided before the legislators came that I would not interrupt or speak in opposition during their time in my class. I did not want the class to become a debating ground between me and them; this was for the students. I thought any dissension from me would create unneeded discomfort. I wanted to show some civility and give the legislators room to make their case. I did not fear they would convince students, as I knew my side also had compelling arguments. And the legislators used many different types of appeals to convince the class – mainly invention strategies we had talked about in class during this semester. It was helpful for students to see effective rhetoric at work.

During the Q&A period after the presentation, one student asked about the lack of training required to get a concealed weapons permit in our state. The legislators encouraged any permit holder to get training. Another student questioned why there was a need for guns after a law passed last year allowing Tasers and stun guns on campus. The legislators suggested those devices would not help those physically weaker.

Then the legislators argued that there was a massive crime increase on some campuses in our state. I stayed quiet, knowing these stats were misleading. But the next class day I felt compelled to provide needed context to the statistics the legislators cited. I praised parts of what the legislators said (they effectively used enthymemes and had a credible personal history with guns, for example). Then I pointed out what the FBI says about crime stats: using one number in a narrow way as they did is not prudent. Then I pointed to contradictory numbers put out by the same university the legislators quoted. Then I showed students how some universities in the same state report crimes that happened in places they can’t verify, i.e., off campus.

Finally I asked my students how we decide which numbers to use. One student responded that we use the ones that best fit our case. I cried a pox on both our houses, because many people in this debate do this. So I asked, in a larger context, how do we frame statistics? Students provided few answers within some awkward silence – perhaps the first time they had ever been asked to grapple seriously with the question.

I ended the conversation talking about the connection between facts and who presents them, how pathos appeals are intertwined with statistics, and how our literacy practices are fraught with complexities. Then I told students that I can’t and won’t tell them what to write. I can only put them in situations where they try out rhetorical strategies I have taught and so create credibility for themselves as writers. This is illuminating a path to learning, not necessarily a teaching of composition. This point is worth making in a political climate in which so many think we professors (especially in the humanities) bar or demean certain student opinions. It is also worth advocating for the asking of important questions. And the silent struggle to understand.

Dr. Matthew Boedy is an Assistant Professor of Rhetoric of Composition at the University of North Georgia in Gainesville, Ga. He teaches sections of First Year Composition and advanced professional writing courses.