READ the Map! - NCTE
Back to Blog 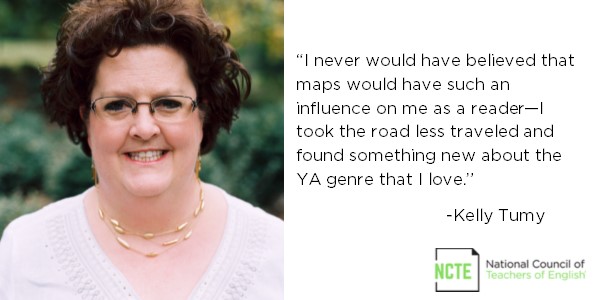 Young adult literature has earned a place in secondary classrooms, but are we doing enough to recognize the different elements in this genre, allowing students to experience the complete book?  Examining what YA authors do when they create maps to use in their narrative spaces and taking time to really read a map will open new avenues for every kind of reader in our classrooms. Have you ever really looked at a map? I mean, really looked at it, and not just looked at it, but examined it, READ it? YA authors have, and their maps have real purpose linked to their narratives that is just waiting to be discovered.

I had the opportunity to develop and present a workshop this year with a geography professor from the University of Houston-Clear Lake—Dr. Jeffrey Lash—who opened my eyes to the wonders of maps. I had always been curious about why maps were included in many of the YA books I read, but the intent didn’t dawn on me until I was in a session with Jeff, and he asked us to read a map. Read a map?  Don’t we just look at maps and draw conclusions and find our way?  I was shown such an enlightening path to working with maps that I knew I wanted to go back and re-read books with maps and make map-reading a part of the learning environment for both teachers and students.

Choosing books was easy as Six of Crows had just come out, and I was intrigued by the double map in the front of the book.  I then added Snow like Ashes, We Were Liars, and City of a Thousand Dolls. Starting with some popular YA sites like Book Riot, I found some articles that actually address how maps become a part of a book’s narrative.  Then, making connections between how the setting influences the narrative, why the map was included, how characters change over time, and how the maps influenced my understanding of that character and those changes, I began seeing how maps shaped each narrative.

But the real gem of doing this work was the collegiality and the cross-curricular connections I was able to make with Dr. Lash. He dutifully read all the books I sent him; he shared map resources from National Geographic and took all the participants, including me, on some incredibly deep map-reading exercises.  Building on the work of Phil Gershmel, we navigated the shores of Ketterdam from Six of Crows with a new lens—a geography lens. We read the map and learned how to identify and analyze patterns, regions, movement, and hierarchies.  We practiced comparing places and interpreting how elements on the map were connected or influenced each other all the while making connections back to each narrative. In We Were Liars, we explored the fictitious yet ominously real island off the coast of Massachusetts inhabited by an incredibly wealthy family. We made comparisons, we made associations with another famous family, and we examined how the island changed over time based on traditional and nontraditional inhabitants. In short, we gave the narrative dimension by examining, reading the maps. Lash shared he was not a reader until a middle school teacher gave him a book about the Lewis and Clark expedition complete with a fold-out map, and then he was hooked—all he wanted was a book with a map to explore, read, and keep him engaged in reading.

What are we doing to keep learners engaged in reading?  I never would have believed that maps would have such an influence on me as a reader—I took the road less traveled and found something new about the YA genre that I love.  Teachers need to remember that literature will always create a sense of place—how we examine that place outside of traditional language arts study will determine the number of children we engage and how many lifelong readers we grow in our classrooms.

Kelly E. Tumy is the curriculum director for English language arts and social studies for the Harris County Department of Education in Houston, TX. She is currently the vice president for membership and affiliates for the Texas Council of Teachers of English Language Arts and a passionate advocate of young adult literature in the secondary classroom.