Save Reading, Save the Country - NCTE
Back to Blog 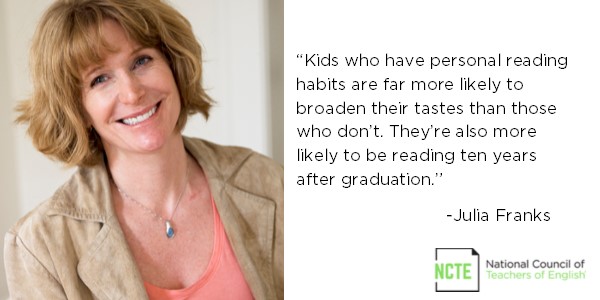 One of my students, a high school senior on his way to Georgia Tech, told me he loved to read as a child and then, as a teenager, began to hate it. He blamed school, and the way his teachers “overanalyzed” literature. (Just to remind you: it’s not unusual for a class to read Hamlet, a four-hour play, and then spend thirty hours talking and writing about it.) Other disaffected readers blame schools’ “terrible books,” including one Stanford graduate who recalls the exact book that made him hate fiction—forever: A Tale of Two Cities.

Some give up sooner. Some have intuited that it’s not the actual reading of Dickens that matters to their grades, but rather familiarity with Dickens’s major themes. And it’s so very tempting to get that information online rather than spending twelve hours reading a book and then constructing your own meaning from it.

We know that non-readers don’t develop the same mental muscles, but there are other reasons why reading isn’t just for the nerds of the world. Our republic provides free education to its citizenry because an informed and intelligent electorate is a public good. Part of getting educated is experiencing other people’s stories. I’m not a Christian, but I identified strongly with the Congregationalist pastor in Marilynne Robinson’s Gilead. Likewise, I aspired to Pi Patel’s transcendent view of suffering in Life of Pi and was moved by Mark Beaver’s conflicted adolescent feelings about Jesus in Suburban Gospel. Because of those books, I have some tiny understanding of the very many ways there are of being a Christian. I could draw similar parallels about being a combat soldier or about being Muslim. By immersing myself in someone else’s story, I’m inhabiting his or her life a little. I’m practicing a different vantage point.

One night last summer, below a dingy Atlanta underpass, a police car pulled in front of mine and stopped, the blue lights flashing into the tunnel. An officer sprang from the car and ran forward into the blackness. Then: sounds of wrestling, moaning, a large soft mass being slammed against the car, the voice of the officer saying, “Stop moving.” He said it four times, each time sounding more as if he were begging. Moments later a tall wiry man sprinted toward my car, blood pouring from a head wound, his eyes dazed with either terror or drugs. The police officer, who was stockier and younger, tackled him, and they both slammed onto the pavement, not five feet from where I sat. The officer wrested the other man’s arms behind him and closed the handcuffs. Then he met my eye for a long moment, his gaze full of uncertainty. He looked Filipino. The man in the cuffs was White.

At first, I tried to square this incident with one of our national narratives, trying to shape my own experience to fit a story I’d already heard. Was it the brutality story? The resisting-arrest story? Racism? Which one was the bad guy?

But, life is not an action movie or a video game where good guys fight evil. There are many other stories out there. And if you’re a reader, you remember Malcolm X’s accounts of police profiling in The Autobiography of Malcolm X or the brutality in American Boys, written by Jason Reynolds and Brendan Kiely. But here’s the thing: sitting right there in your brain next to those stories are also Edward Conlon’s accounts of NYPD responding to the events of September 11 and Trudy Nan Boyce’s novels of a female officer navigating complicated relationships in the neighborhoods of downtown Atlanta. If you’re a reader, you have a lot more practice holding all those conflicting stories in your imagination at one time. And perhaps you’re more prepared to see nuance.

Recent data show that readers are also better at controlling their own stories, which is an integral part of constructing identity and has given rise to an entire field called bibliotherapy. Think about it. Stories are the way we make meaning. Take any personal crisis you’ve ever weathered, even something as prosaic as a break-up. When it was all over, you built a narrative around it: “First he did this, then I did that.” Cause, effect, cause, effect. You needed that narrative in order to feel as if you understood what had happened—in order to move on.

As a nation, too, we need these narratives. Election results end in an upset, and we spend a whole lot of time trying to answer the question why? Or a man walks into a church and opens fire on the congregation. We as a country respond by trying to make a narrative: cause, effect, cause, effect. When we can’t do it, we feel adrift, even despairing. And yes, we’re tempted to oversimplify the story. But the more practice we have at story-making, the more we’re able to construct a nuanced national story.

In my own classroom, I wanted a change, so one spring I offered my AP students a choice. They could read the books on the syllabus, or they could set up reading groups and read twice as many books selected from a list of some 300 great titles. We voted. Forty-nine students out of forty-nine chose to read twice as many books. And—surprise!—they chose door-stoppers they’d long wanted to read (Lord of the Rings! The Fountainhead!) and alternated them with shorter reads (The Road, The Bell Jar, Me Before You). By May, every kid in the class, with one exception, had read twice as many pages as I’d originally planned, and many had read four or five times as  much.

At the end of the year, my seniors’ grades on the national exam were exactly on par with the other AP students in the school. Research data on choice reading, particularly those from linguist Stephen D. Krashen, support this anecdotal evidence.

I’m not suggesting that we abandon the classics or the communal reading experience. But kids who have personal reading habits are far more likely to broaden their tastes than those who don’t. They’re also more likely to be reading ten years after graduation.

We have to offer more choice, and we have to set actual time aside in the school day for reading.  (Maybe fewer hours, say, discussing Hamlet?) In this moment in American culture, we need reader-citizens more than ever. Because of that, English departments have the opportunity to be especially relevant in civic life. Some of them are already taking up that challenge.

’Tis a far, far better thing they do.

Julia Franks is a former teacher and an award-winning novelist (Over the Plain Houses from Hub City Press). She now runs a Web application that helps schools track independent reading from grade to grade (loosecanon.com).

Note: Did you find this post interesting? You may like to read this post by Hannah Sislo whose college project focused on ways teachers could include reading choice in the classroom.