What Happened to Carlos? - NCTE
Back to Blog 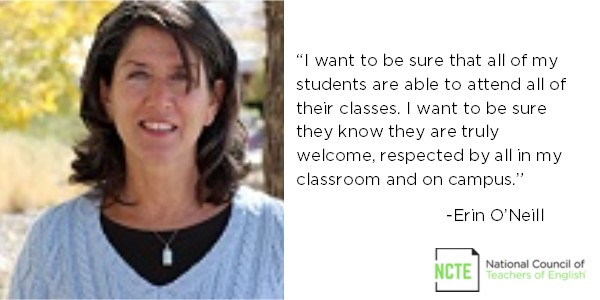 One semester years ago, after noticing a student’s uncharacteristic absence, I asked the students who usually sat next to him, “Where is Carlos?”

“Oh, he was deported, ma’am,” was the casual response. Deported? Wait. Carlos — not a US citizen?

From time to time, I still wonder about him.  Occasionally I find myself remembering an essay written by a student from Juarez, Mexico, who often crossed the border to visit family and friends. His essay described an afternoon in Mexico when suddenly the loud, staccato sound of automatic weapons fire sent the entire street into immediate panic. Finally summoning the courage to explore, my student encountered two strangers lying dead on the street, haloed in rings of blood.

“How did that make you feel?” I wrote in the margins of his essay, fumbling to prompt him toward some larger purpose. “I don’t know,” he said when we discussed it. “It just happened. It happens a lot.”

Right. Okay—pretty good structure, development, and punctuation — we will give the essay a pass.

With my nose to the grindstone teaching, I did not know much about the DACA program, New Mexico law with respect to undocumented students, or even why an undocumented person would not do the obvious thing —  get into the citizenship pipeline and out of the spotlight.

Now I find I have to think about these things, because I care about all the students who have a legal right to be in my classroom, about their ability to learn and their freedom to come to class without having to worry about whether their parents, grandparents, or siblings will be unlawfully questioned, apprehended, and taken to one of the nation’s detention centers before the evening meal.

After ICE raids in February 2017 coincided with “A Day without Immigrants” activities, absence spiked almost 148% in Las Cruces public elementary schools. Officials saw a connection and immediately made a public announcement that schools and buses are considered “sensitive” spaces where inquiries and arrests would not be made without a warrant or some other compelling reason.

Newer, tighter federal regulations probably will not cause families to voluntarily send their undocumented members back to wherever they came from, as the risk of returning for most far outweighs the risk of staying. Many families immigrated to avoid ongoing, life-threatening violence in their communities. Alternatively, they immigrated to avoid the desperation of poverty and to take advantage of the chance to work and to meaningfully contribute to a society where a stable, prosperous life might be possible. Nevertheless, this new climate of fear could keep students in the shadows indefinitely as they and their families do their best to avoid sudden detention or deportation.

Whatever we might believe about public rhetoric and federal policy with respect to undocumented immigrants, I hope we can all agree on this: children should be in school. To learn and to grow as they should, they also need to be cared for by stable families able to meet their basic needs.

Yes, our schools are already populated with too many children whose parents are US citizens struggling below the poverty line; too many children in our nation’s schools are exposed to horrifying trauma and crime. New Mexico hovers at the top of the national rankings for child poverty and for violence against children. However, addressing the needs of one group of children should not necessitate abandoning the needs of another group. Kids are kids.

The needs of all children should be prioritized. Children of refugees often have trouble learning and focusing in school. The American Psychological Association and other mental health agencies have convincingly documented the depression, anxiety, and PTSD suffered by refugee students scarred by past trauma and the constant threat of separation from loved ones. If that were not enough, many immigrant children are bullied at school because of obvious differences in dress or ethnicity.  Some suffer the humiliation of having their spoken English mocked by classmates.

Children have no power over their own legal status; they are completely dependent on the adults around them and on our legal system. For a variety of reasons, legal status can be virtually impossible to get for many family members of documented immigrants and US citizens. In the best of circumstances, for many it would (and in fact does) take decades. Meanwhile, for their children enrolled in classes in the United States, the very real possibility of deportation or detention (de facto imprisonment) looms.

As educators we are not able to solve all of these complex problems. But at the very least, we should be willing to welcome each and every student who is legally admitted to our classrooms, unlike an Albuquerque high school teacher who posted on Facebook that she believed undocumented students should be deported to “better serve American citizen students.”

Before posting, she probably did not think carefully enough about how her words would hurt her students, kids who were already hurting in ways she knew nothing about.

As educators we are constantly searching for the best ways to serve all of our students. Although it can be a struggle, we strive to offer the best possible educational opportunities to every single one, offering them a haven against violence, prejudice, and ignorance.

I understand educators will have varying opinions on this topic. My point is that until the recent ICE raids, I never thought carefully about the issues undocumented immigrants — including students — face beyond their struggles with our perplexing idiomatic expressions and our less than intuitive system for spelling in English.

It is my job to support their dreams with high-quality educational experiences no matter where they came from or how they got here. While I do not know where they have been, I know what they might become if given a chance.

Please read NCTE’s 2015 Resolution on the Dignity and Education of Immigrant, Undocumented and Unaccompanied Youth.