“Cultural Studies, Critical Analysis, and Comedy” - National Council of Teachers of English
Back to Blog 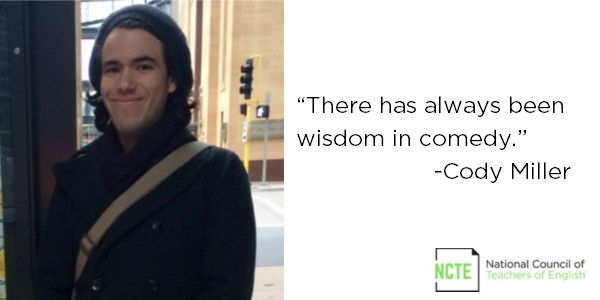 For the past three years, I have used episodes of Fresh off the Boat and Black-ish to explore issues of race, identity, and power within my ninth grade English language arts classroom. More recently, I have added Master of None, loosely based on creator Aziz Ansari’s own experiences, to my curriculum. These episodes are paired with other texts like Gene Luen Yang’s American Born Chinese, Sherman Alexie’s Absolutely True Diary of a Part-Time Indian, Sarah Jamila Stevenson’s The Latte Rebellion, and Sara Farizan’s Tell Me Again How a Crush Should Feel. All of these texts analyze how dominant cultural values are embedded in school culture and continue to privilege some citizens while marginalizing others. The episodes have always been well received by my students and are cited frequently in essays. I am also glad to see how students draw connections between and write across different types of texts, which helps fulfill the mandates of state standards. At the end of the year, I have students take a survey in which they rate the various texts we analyze based on educational and entertainment value. Needless to say, the episodes of Fresh off the Boat, Black-ish, and Master of None manage to score the highest in both categories.

I have more recently started to incorporate stand-up comedy specials in my curriculum to develop students’ critical literacy capacities. As a teacher who imagines my secondary English language arts classroom as a site for cultural studies, I see stand-up comedies as texts worthy of analysis like any other text. I have used a clip from a Trevor Noah comedy special in which Noah documents how his racial identity is interpreted by sociocultural norms employed by different geographies. We use this clip to then discuss how racial identities are not homogenous across the globe and how different governments have used race as a method to sort and disenfranchise groups both domestically and abroad.

Recently I watched comedian and Daily Show cast member Hasan Minhaj’s excellent stand-up special, Homecoming King. Based on his own experiences growing up as a child of Muslim Indian immigrants, Minhaj explores the barriers for immigrants and children of immigrants that exist in the United States. Similar to American Born Chinese and Fresh Off the Boat, Minhaj details the ways in which his white, Anglophonic teachers dehumanized him by never learning the proper pronunciation of his name. He documents how racism shaped deceptively simple teenage rites of passages such as dating in his high school experience. In the special’s most poignant segment, Minhaj discusses growing up Muslim in a post-9/11 world. Specifically, he details a hate crime his family experienced and how it emotionally and psychologically alienated him in his own country. At a time when hate crimes and Islamophobia are on the rise in both everyday life and policy, Minhaj’s commentary on “othering” and “shades of bigotry” is one students need to hear now more than ever. (2017)

Teachers must do more than just press “play” when incorporating stand-up comedy specials or comedy series. Students need instructional strategies to frame and understand the critical issues these texts address. Multicultural scholars Lee, Sleeter, and Kumashiro (2015) offer a framework for immigrant students and students of immigrant families to analyze and document their family histories, which includes “four Ps”: What pushed your family out of their home country? What pulled your family to the United States? What privileges did your family have when coming to the United States? How was your family punished in the United States? Although their framework is used for students’ actual family histories, the framework can be used to analyze stand-up comedies and comedy series like Homecoming King, Master of None, and Fresh Off the Boat as all these texts are either autobiographical or based on fictionalized retelling of true events by the authors. Using the four Ps to analyze the comedies mentioned can support students in developing more critical understandings of immigration experiences and issues, which are often covered in the news with inaccuracies, gross generalizations, and a dearth of the voices of actual immigrants.

A recent NCTE Twitter chat focused on the power of popular culture within English classrooms. Participating in that chat and seeing how other educators use popular culture with their students was encouraging. There has always been wisdom in comedy. We never question that logic when we are reading Shakespeare. We should not question it when we are watching stand-ups such as Homecoming King or comedy series like Master of None or Black-ish. Comedy can offer students a way to develop critical lenses to analyze and critique oppressive forces within their own immediate lives and the world at-large. Former First Lady Michelle Obama understood the value of comedy better than perhaps any public figure. While extolling the virtues of pop culture in an interview with Variety, Obama noted that in order to lead and teach, “First you get them to laugh, then you get them to listen.”