How Do You Know When to Use a Comma? The Value of Individual Conferences in Writing Instruction - NCTE
Back to Blog 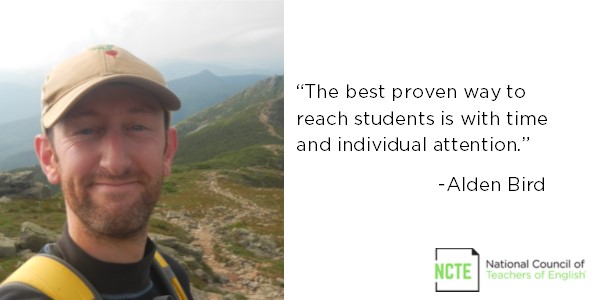 In just seven years of teaching, I’ve already witnessed a dizzying number of educational initiatives, but the fact remains: the best proven way to reach students is with time and individual attention. While public schools are often desperately short of both, last year I got a chance to see what education would be like if they weren’t when a forward-thinking administrator scaled back my teaching load to four classes instead of five, freeing me up to use the extra period conferencing outside of class with my eleventh- and twelfth-grade writing students.

The results were immediate and successful—so successful, in fact, that my entire department was granted this same schedule next year. Never before in my seven years of teaching has such a simple change made such a difference in my ability to reach students.

For my AP students, I made conferences mandatory for the first quarter, after which they were voluntary. For my two heterogeneous groups, conferences were mandatory all semester, usually held every three to four weeks: before or after school, during free periods we shared, or during our thirty-minute afternoon Callback time. My fourth class, an elective, did not conference, but I assigned them far more writing than I ever had previously.

At first the sheer number of conferences was overwhelming, but I learned to stagger them. Four or five each day seemed ideal, with twenty minutes for each: ten to read an essay beforehand and ten to conference.

Surprise, surprise: the individual attention changed everything—but not in the way I expected. I found the greatest value was not in learning a student’s writing needs, but in learning his or her thought process. Think of the gulf that so often separates us from our students: the advice that falls on deaf ears, the red-inked errors made repeatedly, the thoughtful comments inexplicably ignored. For years I’d felt that gulf—as though I couldn’t really tell what my students were thinking.

I learned to use questions to lead conferences. Instead of a slash of the red pen, I could ask, “What was your thought process when choosing this organizational structure?” or “How do you know if you need a comma?” Finally I could understand the students’ sometimes highly individual misconceptions, and then push them to grow and change. By questioning them in person about their writerly decisions, I could push them to begin not only correctly punctuating, but also thinking as writers.

In addition, conferences were invaluable for building relationships. Perhaps my greatest successes this year came from moments during conferences when I urged students to go beyond themselves—moments that would never have happened if my only advice had been written and not spoken with a personal touch. One senior boy had written about a fond eighth-grade memory of his best friend, a young man whose death just months before had shocked and saddened our entire community. Though beautifully written, I could tell that his essay had much more to say. By the time he returned for a second (voluntary) conference, we’d built enough rapport for me to say, “I think there’s more you want to say.” His ensuing thousand-word addition was shared thousands of times on the Internet and brought a measure of healing both to himself and to his community. It never would have happened without the relationship we’d formed through conferencing.

I realize that conferencing outside of class isn’t always a reasonable option. I was lucky enough to have a supportive administration; mature, older students with some measure of free time; and a well-designed, adaptable curriculum to support my goals. In exchange for teaching fewer classes, we are taking on larger sections. It remains to be seen whether teachers at all levels in my department will find this method workable, let alone successful.

There are really only a few proven strategies that work in writing education. Individual attention and more time devoted to practice and instruction will always be at the top of the list and should be an ingredient in any writing initiative. Last year taught me what a difference those simple factors can make. I look forward to building on these gains and conferencing with a completely new crop of writers in just over three weeks.

Alden Bird is an English teacher at U-32 High School in Montpelier, Vermont. He is the author of Let It Rain: The Whitewater Rivers of New England, New York, Quebec and Ontario and the blog Notes from the North Country.