Learning: The Fine Art of Drowning - NCTE
Back to Blog 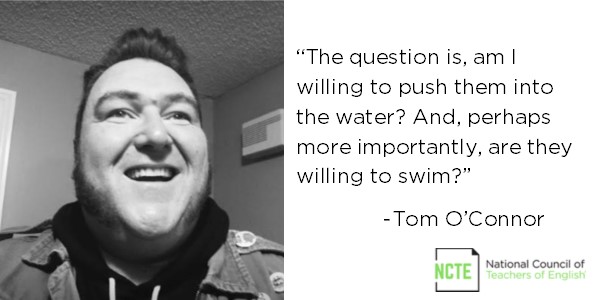 Education was not my forte. Given that I am a teacher, that sounds odd.

While in Teachers’ College at the University of Ottawa, I was asked to think back on a teacher that changed my life. Students around the room had stories of joyful teachers with animated birds floating around them who would bestow straight A’s and praise at the blink of an eye. I did not. As hard as I pondered, I kept coming up blank. Sure, I enjoyed the antics of my zany history teachers. And, of course, I recall the English teacher who read Leonard Cohen lyrics and whose class I didn’t skip. But, in all honesty, Leonard Cohen had nothing to do with it. I didn’t skip because I had a crush on her. The reality is that I don’t recall high school classes bringing any sense of happiness or joy to my life.

The teacher who came to mind was Kevin Gildea, my university professor in Canadian Literature. I was not excited about the course. In fact, if it was not a required course at Carleton College, I would never have taken it. Canadian Literature? Why would I want to read a bunch of books about pioneers trapped in a snowstorm? But, Gildea pushed me to think. He introduced me to the world of critical theory. Yes, I remember reading Ondaatje, Birney, and Moodie, but more importantly I realized how thinkers like Marx, Heidegger, Rousseau, and Bakunin could influence how I read. The CanLit canon was merely a means of understanding the bigger ideas at play. Canadian literature wasn’t about a pioneer roughing it in the bush; it was about the individual attempting to understand their sense of self in an unforgiving land that is unloving and soul crushing. Whoa.

I often share with students the feelings I would have in Gildea’s (and subsequent) classes. In those classes, I would feel lost. The term I find myself using is drowning. I was drowning in a sea of ideas that I didn’t think I was smart enough to comprehend. Week after week I would flail around, my arms swinging to grab something stable, something that would save me. Yet, there was nothing. I was drowning. So, I kicked. I would sit in the library (this was before the internet existed in everyone’s pocket) and wrestle with secondary texts. I would flail. Searching through stacks of sources, each one more confusing than the previous one. And I would gasp for breath. Finding occasional bits of knowledge that would help me to put the puzzle together. And then, as if by magic, I would be lucky enough to grasp the idea. I could suddenly swim.

My job as a teacher, it would seem, is to arm my students, not with the curriculum, but with a sense of fearlessness when it comes to learning. In short, my job is to teach them to swim when the waves feel like they are going to pull them under.

The question is, am I willing to push them into the water? And, perhaps more importantly, are they willing to swim?

Yes, it’s true. I am the teacher who asks you to read “through a lens” and, whether it be feminism, Marxism or post-colonialism, there had better be an “ism” in your analysis somewhere. These ideas come from my post-secondary education at Carleton and my deeply held opinion that without a strong idea, one’s writing lacks power. Of course, these ideas are hard for people to grasp, or at least that’s what people think. Throughout this semester, I have had several students who have written on the topic of a hero in texts like Watchmen, V for Vendetta, Fahrenheit 451, and Ender’s Game. During our initial conversations, the students found themselves trying to force dynamic multidimensional characters into a small, limited, concrete definition of a hero. You know the one I mean—a good person who does the right thing.

Then I introduced them to two other ideas. Joseph Campbell’s idea of the archetype hero, was a good fit for a character like Ender, or even 451’s Guy Montag. However, to try and fit a character like V or Watchmen’s Rorschach into Campbell’s definition is akin to fitting a 747 into a pop bottle. So, I did the unthinkable. I let grade ten students—those “innocent” young minds—loose on Friedrich Nietzsche’s existential hero. Were there questions? Of course, there were. Was there confusion? Of course. Was there fear (and trembling)? Absolutely. But, more importantly, there was a shred of understanding and a degree of thinking that those students didn’t know they could reach in an English class. When I discussed the choice of essays with the students later in the semester, they used words like scary, but afterward, one student said, “I am really proud of myself.” Isn’t this the answer we always want from our students? It should be, but instead, we have created a system that rewards good work, but not always challenging work.

Did these students feel like they were drowning? Sure they did. It certainly would have been easier to write a paper on a less complex topic. They could have done that. They could have gotten a 70 percent and gone home content. Instead, they took a risk. They read a copious amount of writing that was not mandated by the course outline. And, instead of feeling content, they felt “proud.”

What about those who don’t want to swim? What about those who want to stay in the shallow water? Fine. Stay there. But, be comfortable with your average, or even below-average, marks. If you are like I was in high school, you will be fine. But if you are like I was in university, you will hurl yourself into the deep-dark seas and learn to navigate the waves of challenge.

The truth is that by focusing on student comfort, we are forcing kids to think about their marks instead of thinking about the creative and critical ways of dealing with a question. So, instead of challenging themselves and facing a fear, they instead play it safe. And safe, as they say, is boring. Besides, boring isn’t going to create the leaders of the future, and God knows, we need them.

Tom O’Connor plunges into the battery-smoke while waging war on the five-paragraph essay. He is also the Assistant Department Head of English at Jacob Hespeler Secondary School in Cambridge, Ontario, Canada.