Reading That Makes Sense: A Reader Revalued - NCTE
Back to Blog 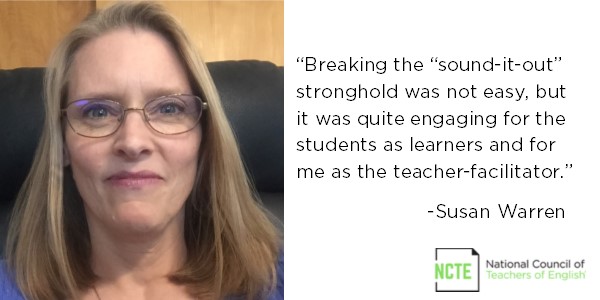 “They just magically know all the words!”

James’s words lingered in my ears. James was able to explain good reading strategies to use when he came to something that he didn’t know, but he only used one. He exclusively chose to sound out words, neglecting any meaning-making strategy. When he came upon a less familiar word, he would sound it out, skip it, give up, and claim he was no good at reading.

James’s second-grade reading assessments reflected below-benchmark scores in his oral reading fluency, based on traditional assessment tools. Although James fell below benchmarks, he was not a high enough priority to qualify for direct reading intervention services during the school day. James struggled, but his struggle had less to do with reading than with the messages that he received from the reading assessments and the skills-based reading instruction focus. The message that he received most often was that reading equaled reading words accurately and fast.

James was struggling with the demands of school at the same time I was learning to use Goodman’s Reading Miscue Inventory. I needed a student to work with, and James seemed a perfect candidate for tutoring.

“James,” I inquired, “Would you be willing to read with me after school twice a week during the spring semester? You would be a big help to me if I could learn to use a different approach to reading with you.” James agreed and we got to work. Me—not knowing exactly what I was doing, and James—liking the attention, if not the reading itself.

It was clear from the Burke reading interview that James liked animals. James chose to read about snakes while I audio-recorded and analyzed his reading. As he read, he was unsuccessful sounding out less familiar words. James would beg me to tell him the correct word. I encouraged him to think about what made sense, which caused him to generally skip the word and continue along. Using the Goodman’s In-depth Miscue Reading Inventory, I determined that his strengths rested in knowing how language sounded (syntax). He would correct miscues to make the sentences grammatically correct. Not surprisingly, he relied heavily on graphophonic cues to the exclusion of meaning-making strategies. James was bound to only sounding out words that were less familiar.

After reading, James was asked to retell what he had read. He generally related some details from the last part of the book. After I analyzed James’s reading, I had him listen back to his reading, allowing him to catch his own miscues. During Retrospective Miscue Analysis, James would hear his miscue and we would stop the recording. I would ask him why he thought he made the miscue. I was often shocked by how his reflections made sense. James also surprised himself with how many miscues he was immediately able to fix up before we started our discussion. He would ask, “How was it I didn’t get that before?”

Week after week, James would read and retell a chapter from a book that he had chosen. I would record him; then I reread the chapter back to him and modeled how I would retell the chapter. Over the weeks, James’s retells improved greatly. He started achieving above the benchmark in his DIBELS retell scores.

While I reread a chapter back to him, I would point out my miscues and discuss them with him. We talked about why I might have miscued and evaluated if the miscue was high-quality or low-quality and why. By exploring our miscues, James was developing the idea that reading was not about reading words fast and accurately. He was beginning to understand that reading was about comprehending. When James came to a word he did not know, he needed permission to make a meaningful substitution. We practiced this until he was doing it on his own. Instead of begging me to tell him the word, he started demanding that I not tell him the word, but give him a hint about what it might mean. Success! Eventually, through my giving him synonyms or making a meaningful connection for him, he would read the word easily without needing to sound it out.

Toward the end of the semester I shared with him that he had been reading books with a Lexile of 500-550. He was amazed! He was thrilled to tell the librarian and his classroom teacher. His confidence and his meaning-making strategies progressed.

I began using similar techniques with students on my special education caseload. I noticed the same pattern in them as I did in James. They lacked confidence, they thought themselves incapable of reading, and they only ever used one strategy—sounding out words. Reading to these students was all about reading the words accurately and fast (which they could not do). Asking them to think of a word that might make sense was foreign to them because the scripted programs that they had participated in used only a skills-based approach, which neglected all of the other meaning-making strategies. Breaking the “sound-it-out” stronghold was not easy, but it was quite engaging for the students as learners and for me as the teacher-facilitator. As students left the reading intervention group, I started hearing, “That was fun! Can we do that again tomorrow?” Success!

Susan G. Warren is a learning and behavior specialist and a 32-year veteran of the Bloomington Public Schools in Bloomington, Illinois.