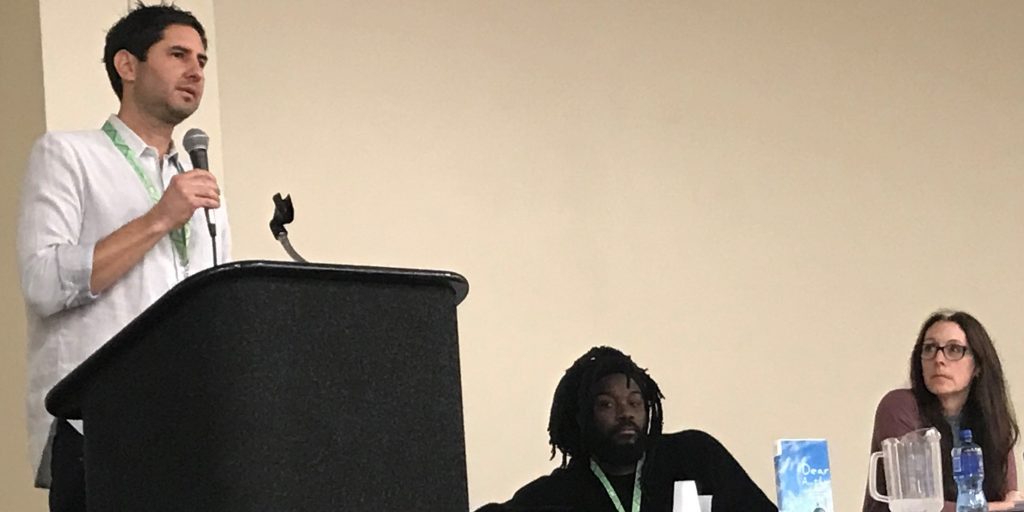 NCTE Convention brought so many of us together: teachers, authors, teachers of teachers, authors, students, authors. The Standing Committee Against Censorship took advantage of this plethora of authors to gather three renowned YA writers on a panel to speak about why Books Save Lives.

A year or so ago, Joan Bertin on behalf of the National Coalition Against Censorship and I on behalf of NCTE conducted a survey of authors whose works we’d defended recently. We had a hunch about three things that the survey proved to be true: 1) what books mean to kids doesn’t figure enough in defenses of challenged to books; 2) that kids tell authors what books mean to them; and 3) that “kid testimony” could become some of the best rationales for kids to read these books. The results of the survey confirmed our hunches. In general, kids told us

● This book made me more empathetic, tolerant, and accepting, of myself and others. It helped me relate better to others and talk to them about things we never would have discussed otherwise.
● This book made me realize that I’m not the only one with problems; it helped me feel more normal and less alone.
● This book saved my life. It helped me confront a serious issue and deal with it.
● This book turned me on to reading. It was the first book I ever read all the way though.
● This book understood me the way no one else does. “I don’t know how I’d have gotten through adolescence without it.”
● This book inspired me to want to do something with my life.

And, so, the session came to life featuring Matt de la Peña, Jason Reynolds, and Laurie Halse Anderson and they spoke gold!

Matt de la Peña started off by reminding us that while books can save the lives of readers, they also save the lives of writers—that there’s an obvious symbiosis between writers and readers and that, for writers, respect for the reader is a big part of the equation. He told us how and why his book was removed from the Mexican-American Studies program in the Tucson, Arizona, Schools, how it was a student who came to him for help because his book really meant something to her, and how he sent contraband copies of Mexican White Boy to the students whose copies had been taken right out of their hands.

“Wished I’d had a book we could cry into,” Jason Reynolds lamented, referring to the story he’d just told us about watching a friend get arrested for a crime he didn’t commit, basically for being Black. He went on to remind us of the “beauty of books to create a space for that ice to melt slowly.” He chastised people for their fear of being human, their fear of discomfort, and noted that these fears keep our kids in danger and insure that he “gets banned as a person every day.”

• get a partner as he did in All American Boys.
• teach the book as a questioning.
• make sure your students know it’s okay to disagree, just not to disrespect.

• comfort is the biggest privilege of all because if you’re comfortable, you don’t have to be afraid.
• until you can see yourself, you cannot be yourself.

“The truth is that we save each other.” –Laurie Halse Anderson