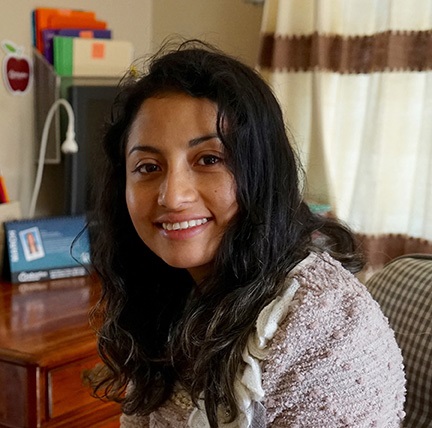 “By telling my story, I feel at peace. Everything that was on my mind, all of my suffering and all of my dreams—my destiny—now are kept safe in this book.”
—Liliana Velásquez, author of Dreams and Nightmares/Sueños y Pesadillas 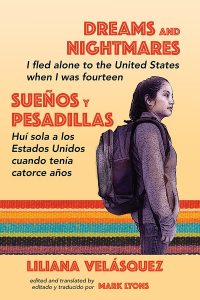 Dreams and Nightmares/Sueños y Pesadillas is a memoir by teenager Liliana Velásquez, who at 14 fled Guatemala by herself to escape violence and poverty and endured a harrowing trip to the US, where she was captured in the Arizona desert and put in detention, then took two years to convince the US, courts to grant her asylum.

Once in high school, living with a loving foster family, Liliana decided to tell her story, and worked with Mark Lyons at New City Community Press (founded by NCTE member Steve Parks), to edit and translate her book, which is completely in her own words. Liliana reminds her readers that her story is also the story of over 210,000 children who traveled alone to the US and were arrested by immigration. The Dreams and Nightmares/Sueños y Pesadillas project includes the book and a website, where a free teacher’s guide, including discussion starters, study units, and class projects can be downloaded.

Literacy as a Force

This year at Texas A&M University–Commerce, I incorporated Dreams and Nightmares/Sueños y Pesadillas into our first-year writing courses. The book, which is in English and Spanish, provided the chance to include writing that many of our students (and instructors) might identify with from their first-generation, working-class, and/or multilingual backgrounds.

Indeed, this project provides an opportunity for students from multiple backgrounds to see how Liliana’s journey was shaped by material conditions involving social, political, and economic factors. Her story stimulated my students to think about the tensions between traditionally dominant “academic” literacies and Liliana’s vernacular narrative about her lived experiences, highlighting how literacy—the use of it, the search for it, and even the regulation and oppression of it—occurs in each of our communities and across national borders.

Liliana’s story inspired us to think about the roles played by our access to education and money; our mobility between regions, gender, and race; and our citizenship status. My hope is that this experience will help my students recognize literacy as a force that can shape their lives in new and unexpected ways.

Jessica Pauszek is director of writing and assistant professor of English at Texas A&M University-Commerce.

The Value of Starting a Conversation

While I was working on Dreams and Nightmares, I realized that not everyone views the world as I do. I believe Liliana fell victim to a broken immigration system for minors and an abusive foster situation, and that we need to work toward a longterm solution. I felt as if [these things] were obvious to everyone, but while I was speaking at Beaver Country Day School in Cambridge, Massachusetts, a student stood up at the end of our presentation and began spouting off anti-immigration rhetoric: “Why should we care about her, she’s just here taking American jobs,” and so on. From the smattering of cheers and applause from various pockets of the audience I realized that not everyone thought the same way.

When I started working on this project, I saw myself on the “noble” side of a rhetorical battle for “good” and “evil.” I think instead of being right or wrong, however, the true power of this book is in starting a conversation.

At the end of my day at Beaver I had a conversation with the student that stood up in the auditorium, and at its conclusion we shook hands, looked each other in the eye and, I believe, walked away with a deeper level of respect for one another than we had before. We even agreed on some things.

Zachary R Barlow is an undergraduate student in the Writing Studies, Rhetoric, and Composition department, and the president of the Writing and Rhetoric Student Organization, at Syracuse University, New York.

Immigration is a topic that we see so frequently in our daily news that we have a false sense of reality compared to the true testimonies of minors like Liliana. I was the digital programmer and associate editor for the Sueños y Pesadillas/Dreams and Nightmares project. My job was to create a website to share Liliana’s journey with a wider audience. Meeting with Mark Lyons, the lead editor, helped us to understand Liliana’s vision for her story, as well as the ultimate goal of bringing awareness about a population of undocumented minors who have rarely shared their stories.

The majority of my work was on the digital side of the publication. However, I was lucky enough to also speak at a high school in Boston, which helped enlighten me to the importance of the work we were doing, especially to a younger audience. We encouraged educators to join us in a conversation and realized quickly that there were viewpoints on this controversial topic that many of these students longed to express.

As the daughter of an immigrant, as a college student, and as someone who is trying to better understand how to educate others, working on this book was important to me. It was an honor to be a part of a team to help share Liliana’s story, but the strength and bravery that she has cannot be matched. With her story, she is helping to change a stereotype about undocumented minors.

Rafaela Evans is an undergraduate student in the Writing Studies, Rhetoric, and Composition department, and the vice president of public relations for the Writing and Rhetoric Student Organization, at Syracuse University, New York.

This piece first appeared in the December 2017 Council Chronicle.