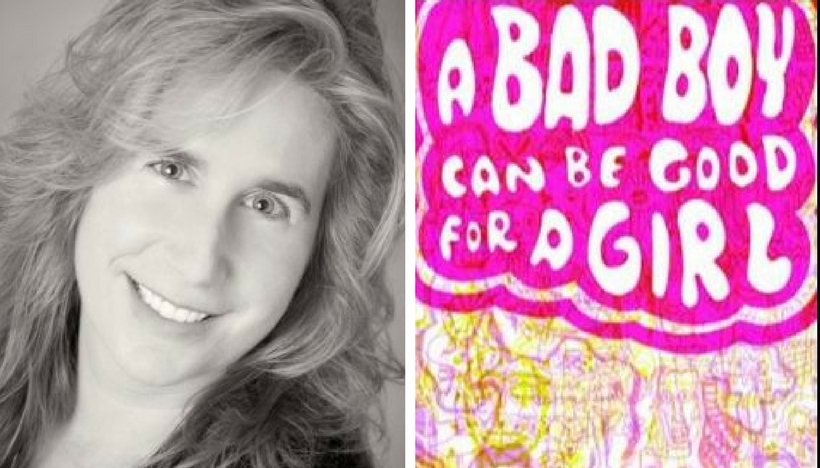 Apparently Tanya Lee Stone’s book, A Bad Boy Can Be Good for a Girl, was too bad for the Cody, Wyoming, High School library. Despite the recommendation of a district committee to keep the book that one parent challenged, the book was recently voted out by the school board.  NCTE joined NCAC’s Kids Right to Read Project and other First Amendment Groups to protest the challenge and the removal of Bad Boy.

The town has been talking about this book for four months now—since November when a parent complained and called it “trashy” and inappropriate for the high school library. When the district committee made a recommendation that the book stay on the library shelves, the complainant noted, “’People are unaware of what is in library,” she said. “People should know what is available. The high school library is worse than the public library.’”

Just last week, Doug Blough asked in his column in the Cody Enterprise, which has featured many articles, letters to the editor, and editorials on the challenge, “Should we force literary blinders over the hungry eyes of our curious youth? You might coddle impressionable young minds through strict censorship, but at what cost?”

Tanya Lee Stone gave answers in an interview about censorship a couple of months before the challenge. She explained why and how she wrote Bad Boy and, when asked how she handles censorship of her books, she noted, “The worst ones come into your inbox from the people who believe they hate you. At first it was really difficult to not take that personally and feel terrible.”

Then on February 22, Tanya Lee Stone stood up for Bad Boy on her Facebook page,

A BAD BOY CAN BE GOOD FOR A GIRL has been taken off the shelves of a high school—AGAIN. This time, in Wyoming because of sex scenes, deeming the book “pornographic” and “trashy.” And—a committee member warned—”there is more to come.”

. . . and this novel of mine is more than 10 years old. And friends, sales have never really been great on this one.

Why is that? It got excellent critical reviews and accolades. Ten years later, I still get regular fan mail from girls thanking me for helping them get out of—or avoid—a bad situation with a boy. Isn’t that GOOD for a girl?

Isn’t an open and honest look at sex from a girl’s point of view what we need MORE of? Isn’t that GOOD for a girl?

It is a CAUTIONARY tale! It is a book about empowering young women and exercising their voices and choices about sex. THAT is what’s GOOD for a girl. Get it? Enough is enough.

Not a single person in my 20+ year career of authoring more than 100 books would ever criticize me for taking advantage of a news item or story to shamelessly promote my books, but this Cody WY story is my tipping point. (For instance, I’ve never publicly talked about how Judy Blume loved it and that’s why I first met her; she wanted to talk to me!) And so I give you UNshameless promotion for a 10-year-old book that girls NEED to read:

A BAD BOY CAN BE GOOD FOR A GIRL should NOT be taken off any high school shelves. It should be bought in DROVES for them. GIVE GIRLS THEIR VOICE—they are ALLOWED and ENCOURAGED to have healthy sex lives without having to apologize for it or suffer some horrible fate. They are allowed to make mistakes. They are allowed to learn from them and chart their own course as they see fit. Enough is enough.

Well, if nothing else, the challenge has upped the distribution of the 10-year-old novel in Cody where the public library is stocking up, townspeople are buying copies for themselves and others, and Tanya Lee Stone’s Facebook friends are ordering in droves. 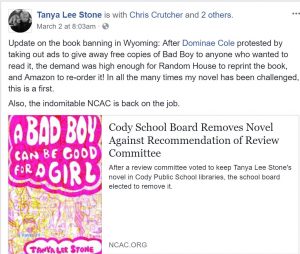 Now, David Levithan’s Two Boys Kissing, and Herbie Brennan’s The Wizard’s Apprentice are under fire and have been pulled from the Cody High School library, and NCTE is joining others to weigh in. I guess the school board member who suggested that more books would be pulled was right.