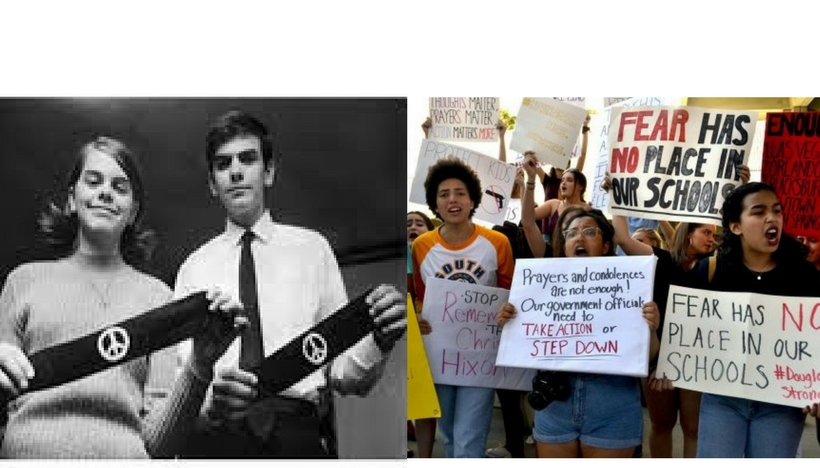 At the height of the Vietnam War in 1965 Mary Beth Tinker was a 13-year-old middle schooler. She and some other students, including Chris Eckhardt and her brother John, decided to wear black armbands to protest the war. On December 16 when they arrived at school, they were asked to remove the armbands. They refused and were sent home and told not to come back to school until they could come without armbands. Mary, her brother, Chris, and the other students stayed home until after the holiday break when they returned to school wearing black clothing, something they did in protest every remaining day of that school year.

Who would have imagined then that their armband protest would become a four-year court battle culminating in the landmark Supreme Court decision: Tinker v. Des Moines, the foundational ruling on students’ freedom of speech. On February 24, 1969, the Court ruled 7-2 that students do not “shed their constitutional rights to freedom of speech or expression at the schoolhouse gate.” 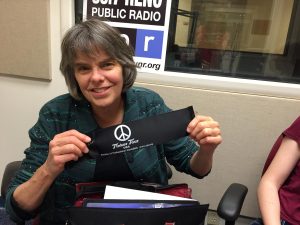 Mary Beth Tinker continues to work for the students’ right to speak out. In 2013 she wrote,

“I am concerned about what seems to be a growing tendency to discipline students who exercise their First Amendment rights. Coupled with a decline in civics education, this tendency endangers our democracy and our future, because we need the voices of young people. To many of us, including the ACLU, it is important that young people know they have the right to express themselves.”

A local school district in my area sent a message this week to high school students and families:

The tragedy at Marjory Stoneman Douglas High School and other losses of life on school campuses across the nation over several years have driven increased interest in student-led civic engagement efforts and actions, including the idea of school walkouts. The District supports students’ Constitutional rights to peaceful assembly and free expression. Our goal in responding to walkout plans and other forms of peaceful assembly is to keep focus on teaching and learning while planning to provide student supervision that supports student and staff safety.

Based on social media messaging, it appears there are at least three major student-led efforts underway:

1. March 14: Call for school walkout at 10:00 am for 17 minutes
2. March 24: March for Our Lives for all to participate in Washington, DC (@AMarch4OurLives)
3. April 20: National School Walkout for students across nation in local districts (@schoolwalkoutUS)

We have been in conversations with students at our schools and believe there are students planning on participating in one or more of the national student-led events.

Our top priority will always be to support the academic and social emotional needs of our students while maintaining a safe and orderly learning environment for all. We encourage parents/guardians to talk to your student(s) about how they may be feeling and the importance of expressing themselves in appropriate ways at school.

It’s important to know that disorderly conduct that disrupts school operations is not acceptable and will be handled compassionately but firmly. Although the District supports students’ rights to peaceful assembly and free expression, the Student Code of Conduct remains in place. If a walkout occurs, there may be increased staff and/or a request for police presence to help ensure student and staff protection and safety, not to quell student expression.

We recognize that some staff, families, and members of our community have expressed support for demonstrations. This issue understandably hits the hearts of many and is more poignant given our profession. However, under Illinois law, school employees are prohibited from engaging in political activities while at work or on duty. As District employees and staff, participating in a student walkout would violate this prohibition. Accordingly, staff are being asked to fulfill assignments for supervising students and cannot participate in the walkouts.

Finally, both high schools have student organizations planning peaceful protests focused on student safety and student voice on March 14, 2018, after school at 3:45 pm. We encourage student expression to be demonstrated during these organized events instead of at 10:00 am. More information about the after school protest will soon be shared with students by their student organizations.

So what happens if students decide to demonstrate at 10:00am instead of 3:45pm on March 14? The District memo seems clear on that, but what about the law? This First Amendment Rights for Student Protesters Guide from the National Coalition Against Censorship spells things out:

• Students have a constitutional right to participate in non-disruptive protests during the school day. BUT
• Obey your school’s policies.
• Tell your school officials that you’re planning to protest.
• Don’t be vulgar, violent, or disruptive.
• Think about protesting off school property.

Check the guide for more.

And, if your student newspaper is covering these protests, here’s a guide for them: Covering Walk-outs and Protests. As this guide points out, there are many avenues for protest—think social media, for example. 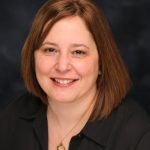 NCTE president-elect Franki Sibberson recently noted when talking about her theme for the 2018 NCTE Convention,