When a Good Book Helps the Conversation - NCTE
Back to Blog 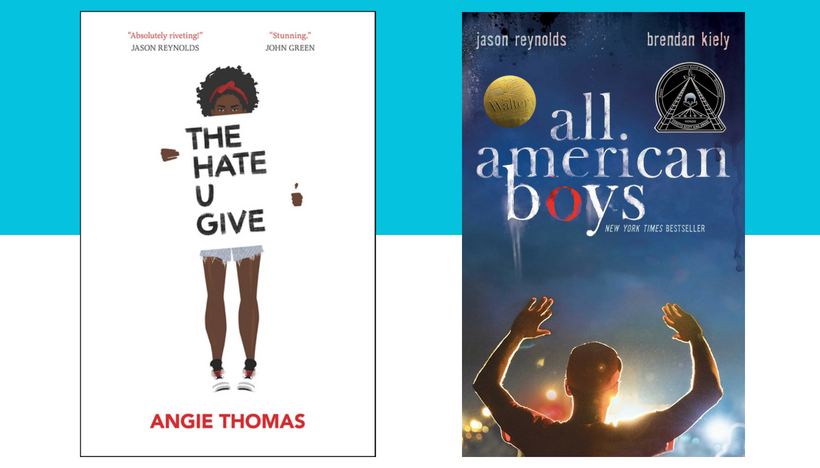 Kids are talking . . . about race and about the many instances in the last few years in which African American youth have been killed by police. They’re listening and watching movements like #BlackLivesMatter. Kids are trying to understand, trying to find their own voices, and to find ways that might help this violence not happen. This is when a good book helps the conversation.

The Fraternal Order of Police in Charleston County, South Carolina, disagrees. They charge The Hate U Give and All American Boys for being “anti-police” books and they’re asking that they be removed from the Wando High School summer reading list. As Publishing Perspectives notes:

“In a statement carried by WCBD, the Charleston affiliate of NBC News,  John Blackmon, who is president of the Fraternal Order of Police Tri-County Lodge #3, is quoted saying that the books can create in young readers “distrust of police.”

“Freshmen . . . they’re at the age where their interactions with law enforcement have been very minimal. They’re not driving yet, they haven’t been stopped for speeding, they don’t have these type of interactions. This is putting in their minds, it’s almost an indoctrination of distrust of police and we’ve got to put a stop to that.”

NCTE joined the National Coalition Against Censorship and four other First Amendment groups to speak back to the police on this one, noting,

Books provide a safe space for students to explore difficult issues and ideas as they grow into a greater understanding of themselves and the world around them.

Ebony ran a story on Friday with the following quote from our letter,

Removing books that have been selected for their educational value solely because the ideas expressed in them conflict with some parents’ political or moral beliefs would improperly allow parents to dominate the public education process with their opinions. For young readers in Charleston, The Hate U Give and All American Boys offer insight into the racial injustices many people of color experience, and inspiration for young activists who desire change.

An article in The Guardian  includes this quote from Svetlana Mintcheva, Director of Programs, National Coalition Against Censorship,

To our knowledge there has been no formal move to remove the books from the list and, given that it is already mid-summer, it is unlikely that this would happen. This is not the first challenge to The Hate U Give and probably won’t be the last, given the increasing popularity of the book (and the forthcoming film) coupled with national tension over police violence and its disproportionate effects on black men. We will continue advocating for the need to have open and nuanced conversations in our school system about such difficult but vital issues. It is a sign of the times that complaints over books, which used to be predominantly over sexually explicit material, are now increasingly over political issues, especially police violence.

And this one from Neil Gaiman,

I don’t actually believe that book-judging is a legitimate part of the business of policing. Local police union leader John Blackmon claims that they are only responding to the public reaching out to them to complain about the reading list. Because when people don’t like the books their kids are asked to read, they call the police.

The Hate U Give and All American Boys have both been highly praised for their complex handling of their stories centering on the intersections of racism and police violence. In the video from this news outlet, South Carolina’s Poet Laureate, Marjory Wentworth, added her voice to those in favor of the books and the stories they tell .

Watch as the authors of All American Boys talk about their book.

There have been school boards and administrations in a handful of states who’ve decided to censor the book, and I fear it’s because they assume the book is anti-police, which it is not. Some folks think the language is too strong. Both of those assumptions worry me, because in the vast majority of schools and libraries across the country where we’ve spoken to young people across the socioeconomic spectrum, they’ve told us how much the book sounds just like them and how much it directly reflects a reality they are trying to process and understand. If adults decide to censor the book, they are robbing young people of a tool to help them process.

Jason Reynolds  believes that even as many adults shy away from talking about race, their kids are anxious to have that conversation. “No matter what the adults say, nine times out of ten, the kids are ready to talk.”

In an interview with The Cut, Angie Thomas talks about The Hate U Give after being asked, “Why do you think there has been a recent wave of teen books that address these real-life, often intense issues?”

These are the issues that teenagers are vocal about. They’re finding their voices. We’d be doing them an injustice if we weren’t giving them the mirror to see themselves in. These kids will be the ones to run this country. In one year, two years, four years, they’re going to be voters. If we start building empathy in them, maybe some of the things we have to fight for now, we won’t have to in the future.