This Text Is Right for Kids. Why’s It Not Right for Some Adults? - NCTE
Back to Blog 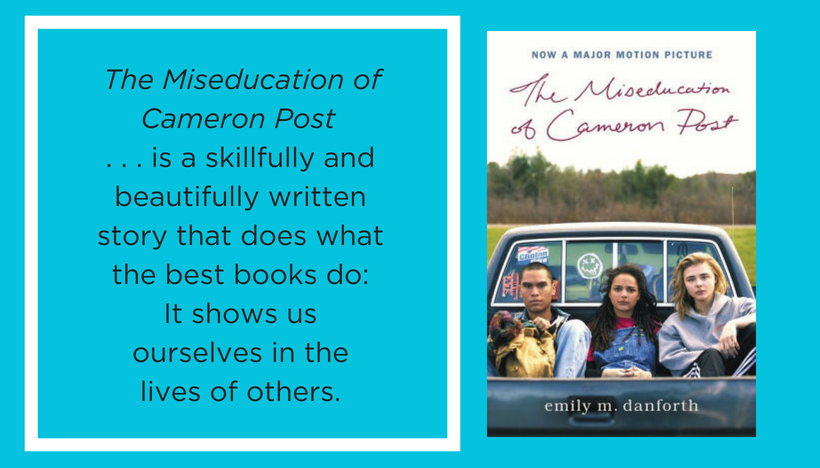 The Miseducation of Cameron Post by emily m. danforth is about a lesbian teen who is sent away to receive gay conversion therapy.  The novel received starred reviews in Booklist, Publishers Weekly, Kirkus, and School Library Journal when it was published in 2012, and it was reviewed with praise by Malinda Lo on NPR.  She said,

Describing a book as “important” is a compliment, but it can also seem to detract from its literary quality—as if its significance is more about its message than its sentences. The Miseducation of Cameron Post is indeed an important book—especially for teens growing up today in communities that don’t accept them for who they are. But it is also a skillfully and beautifully written story that does what the best books do: It shows us ourselves in the lives of others.

And now The Miseducation of Cameron Post is an award-winning film opening in theaters this Friday. The film is directed by Desiree Akhavan with Chloë Grace Moretz staring as Cameron.

The Miseducation of Cameron Post is an excellent candidate for a teen read: it holds important messages for our students; the teen characters face up to important issues and sort them out; and the book is well written, well reviewed, award-winning, and pertinent.

Yet despite, or maybe because of, these things, The Miseducation of Cameron Post has been challenged and is likely to be challenged again because it’s now in the public eye as a movie. When the book was challenged in 2014, NCTE did work with the National Coalition Against Censorship and others to decry its removal from the summer reading list in Cape Henlopen Schools in Delaware, and author emily danforth thanked us,

The letter (defending The Miseducation of Cameron Post) is absolutely wonderful: thank you for all your work on this, and for all of the work you do every day to call attention to, and combat, acts of censorship.

Ironically, significant texts for teens like The Miseducation of Cameron Post are some of the most frequently challenged by adults, even though young readers say they are especially important and meaningful to them. Following are a few quotes from teens about the book’s value for them (hint—do get quotes from your students about the books they love, get their permission to use those quotes, and keep the quotes in a “just-in-case” file to use should a challenge arise):

[The Miseducation of Cameron Post] helped me, the confused 15-year-old I was, understand the feelings I was having. And I can’t thank you enough for that. Your book changed me.

I was browsing a website a few months back, and found out that there were in fact novels about teenage girls, experiencing the same things I am going through. Up until that point, I had no idea this type of literature even existed. I stumbled upon a description of your book, and I could immediately relate.

And, one writer of an essay on the importance of the novel said:

Finally, while adults may be uncomfortable with literature that accurately portrays the formative years of modern youth, teenagers find characters with which we identify. In such literature as Cameron Post, we read ourselves speaking back to us through the pages, telling us how they sorted through the problems we share.

There is no doubt that the film The Miseducation of Cameron Post takes on the issue of gay conversion therapy, focusing on when Cameron is sent to God’s Promise, a boarding school designed to cure Cameron her of her gayness. Desiree Akhavan and emily danforth point this out in their interview with Terry Gross on Fresh Air.

The film also focuses on what truth means to each of the characters in the film and on how each of us must be true to ourselves as Chloë Grace Moretz, Desiree Akhavan, Shasha Lane, and John Gallagher, Jr., discuss in the following video.

In his 2013 English Journal article,“Reading Democracy: Exploring Ideas That Matter with Middle Grade and Young Adult Literature,” Steven Wolk explores how English teachers can teach for a caring and critical democracy. Noting that, “John Dewey believed the lifeblood of democracy was in the people engaging in daily discussion and debate about the vital issues and questions confronting our lives and the world,” he lists The Miseducation of Cameron Post as one of 6 books on sexual orientation that students might read.

Wolk finishes his article this way,

In her work advocating education for a strong and moral democracy, Maxine Greene defines social imagination as “[t]he capacity to invent visions of what should be and what might be in our deficient society, on the streets where we live, and in our schools” (5). English language arts teachers have a unique role in cultivating that imagination to empower adolescents with the insight and inspiration to help make that vision a reality. A large part of that uniqueness is the remarkable books we can use in our classrooms. Inside those books are the seeds of a better world.

Delaware student Rebecca Wagner speaks to those adults who would censor such books, in her video, “Slam Poetry: 40 Things About Censorship at LTPS February 2015”: