A Celebration of Reading Is Needed Now More Than Ever! - NCTE
Back to Blog 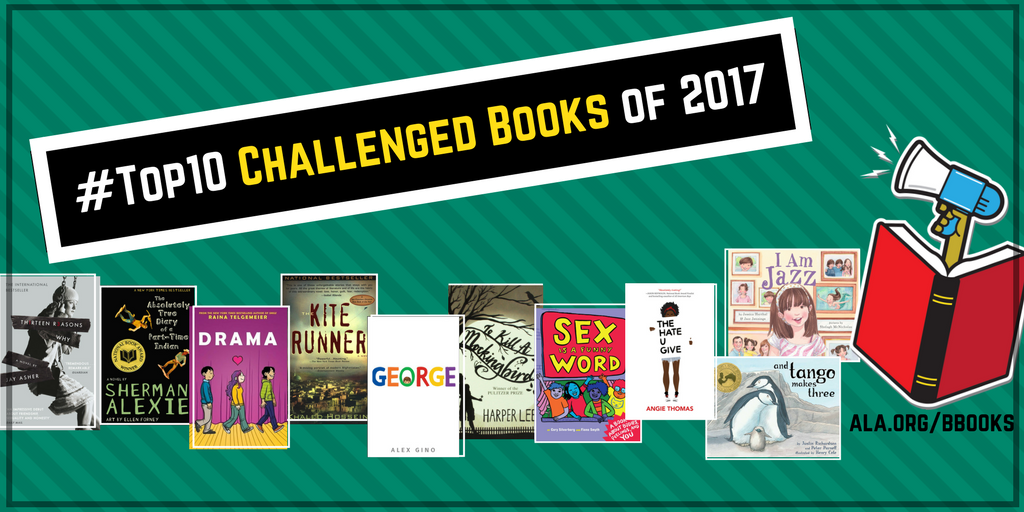 Censorship succeeds when no one talks about it; let’s make some noise.

The ALA Office for Intellectual Freedom

As we kickoff Banned Books Week 2018, let’s take a look back at the Top 10 Challenged Books of 2017. Since it’s important that we keep these books in the classroom and on the bookshelves, we’re paired each title with a teaching idea from NCTE and ReadWriteThink.org.

Originally published in 2007, this New York Times bestseller has resurfaced as a controversial book after Netflix aired a TV series by the same name. This YA novel was challenged and banned in multiple school districts because it discusses suicide.

13+ Answers to 13 Reasons Why shares reasons why the issues in the book are issues are worth talking about so we can do something about them.

Consistently challenged since its publication in 2007 for acknowledging issues such as poverty, alcoholism, and sexuality, this National Book Award winner was challenged in school curricula because of profanity and situations that were deemed sexually explicit.

Millie Davis shared with us Why Students Should Read This Book. Be sure to listen as Alexie talks about this title being banned.

This Stonewall Honor Award–winning 2012 graphic novel from an acclaimed cartoonist was challenged and banned in school libraries because it includes LGBT characters and was considered “confusing.”

Learn more about Drama and other texts with “Finding Just the Right Story: Motivating Readers with Middle Level LGBTQ-Themed Literature.”

This critically acclaimed, multigenerational novel was challenged and banned because it includes sexual violence and was thought to “lead to terrorism” and “promote Islam.”

Middle Ground: Exploring Selected Literature from and about the Middle East provides activities, lessons, and materials for various print and nonprint texts, including books such as Habibi, The Kite Runner, and Behind the Burqa: Our Life in Afghanistan and How We Escaped to Freedom and the films Osama and Reel Bad Arabs.

Written for elementary-age children, this Lambda Literary Award winner was challenged and banned because it includes a transgender child.

George is a Charlotte Huck Honor Book from 2016. Read more about it in “Transitioning Teens: Why We Can’t Forget the T in the LGBTQ Spectrum.”

This 2015 informational children’s book written by a certified sex educator was challenged because it addresses sex education and is believed to lead children to “want to have sex or ask questions about sex.”

Tune in to this podcast episode to hear about an array of nonfiction books on teen sexuality—some about the mechanics of sex, some about the media and body image, some written by teens themselves. You’ll hear about books for older as well as younger readers, boys as well as girls, gay teens as well as those who are straight or questioning.

To Kill a Mockingbird written by Harper Lee

This Pulitzer Prize–winning novel, considered an American classic, was challenged and banned because of violence and its use of the N-word.

Christina Torres shares We Shouldn’t Always Feel Comfortable: Why To Kill a Mockingbird Matters. She offers a full-throated defense of continuing to teach the novel in classrooms if it is the text a teacher wants to use.

The Hate U Give written by Angie Thomas

Despite winning multiple awards and being the most-searched-for book on Goodreads during its debut year, this YA novel was challenged and banned in school libraries and curricula because it was considered “pervasively vulgar” and because of drug use, profanity, and offensive language.

As part of their study of The Hate U Give, students learn about the Black Lives Matter movement and in small groups conduct/share research about social issues key to the plot, characters, and themes of the book in this lesson plan. They then read and discuss nonfiction excerpts by James Baldwin and Ta-Nehisi Coates before synthesizing their understanding of all the texts under study through a communal idea poster and an individual synthesis and reflection project.

Returning after a brief hiatus from the Top Ten Most Challenged list, this ALA Notable Children’s Book, published in 2005, was challenged and labeled because it features a same-sex relationship.

“Doing What You Can: Considering Ways to Address LGBT Topics in Language Arts Curricula” outlines three approaches to addressing LGBT topics through literature, each with its own benefits, drawbacks, possibilities, and risks. 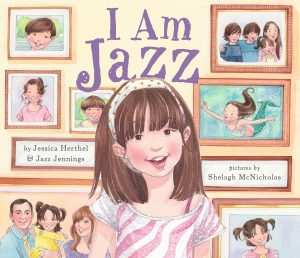 This autobiographical picture book co-written by the 13-year-old protagonist was challenged because it addresses gender identity.

sj Miller advocates for a queer literacy framework to facilitate a new reading and legitimacy of (a)gender and (a)sexuality in the self and others in “A Queer Literacy Framework Promoting (A)Gender and (A)Sexuality Self-Determination and Justice.”

What are your approaches to teaching banned or challenged texts?