Texts and Resources About September 11th - NCTE
Back to Blog 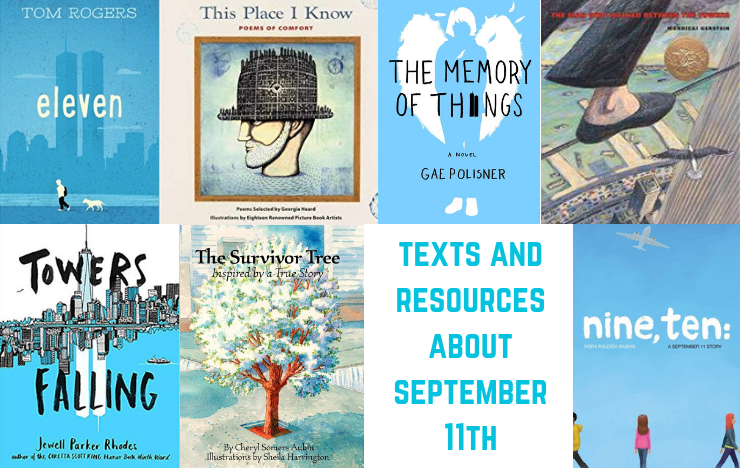 There was recently a post on Twitter by Holli Hartman @holli_85 asking for poetry examples that could be used around the anniversary of 9/11. The Twitter community rallied and shared poems and songs, books, short stories and more! Here is the collection of texts and teaching ideas from the #NCTEvillage:

This book is about the journey of a boy turning eleven on 9/11. @momofT_A shares that it would be a great mentor text.

Author Tom Rogers then added that he would recommend Nine, Ten: A September 11 Story by Nora Raleigh Baskin. This book looks at the days leading up to the tragic events of September 11, 2001, and how that day impacted the lives of four middle schoolers. He also shared this middle-grades 9/11 study syllabus put together by educator Lesley Roessing.

The Survivor Tree: Inspired by a True Story by Cheryl Somers Aubin and The Man Who Walked Between the Towers by Mordicai Gerstein, were suggested by @tikaee saying “Both of these books have beautiful imagery. Building background knowledge is so important.” The Survivor Tree takes the reader on a journey of hope and healing that parallels our nation’s own journey following the events of September 11, 2001. The Man Who Walked Between the Towers shares the 1974 story of French aerialist Philippe Petit who threw a tightrope between the two towers of the World Trade Center and spent an hour walking, dancing, and performing high-wire tricks a quarter mile in the sky. @Kpteach5 also commented that The Survivor Tree is beautiful.

@LundLibrarian suggests pulling an excerpt from the novel. The narrator of this book is a middle school student who wasn’t born at the time of 9/11, but her father is connected to the tragedy. @Jentechnology also recommended this book.

The Memory of Things by Gae Polisner

@jenn5373 shared this title, saying this is a 9/11 novel but one of the character’s perspective is written in verse. It lends itself very well to pulling pieces out for figurative language use.

Lucille Clifton created a manuscript of seven poems, one for each day of the week, entitled “September Suite” in response to the events that transpired on September 11th. @GVHermanator suggested that the class first read and analyze the poems together, and then students choose a week in their own life to capture.

“The Names” by Billy Collins

This poem is dedicated to the victims of September 11 and to their survivors. @ktempletondms said it might be a good choice for the remembrance of this day.

@JMitchellELA shared a link from the Library of Congress, on “Poetry of September 11.” It is a guide to poetry written in the immediate aftermath of the September 11, 2001 terrorist attacks.

@NorthofOak mentioned this piece in which Szymborska’s overall tone throughout the poem is trying to pay respect without describing how it ultimately ended for them.

“For Our World” by Mattie J.T. Stepanek

@Sarahmaureenb reminds us to read this poem. Peacemaker Mattie Stepanek wrote this poem when he was 11 years old.

This Place I Know: Poems of Comfort edited by Georgia Heard
@melindasbutler shared this anthology. These poems and illustrations will help children all over the world get through difficult times and continue “to live,” “to laugh,” and “to sing.”

“Silence (Over Manhattan)” by Paula Bardell

@_ItsTristan suggested a close reading of this poem and using it to illustrate examples of figurative language.

“First Writing Since (Poem on Crisis of Terror)” by Suheir Hammad

@MLuckritz comments that since the poem is long, the class can select stanzas to examine based on their assignments.

“The Rising” by Bruce Springsteen

This song shared by @MrsPfleegor and @jea2v is a beautiful text when analyzed about firefighters coming together to try to save lives.

“Where Were You (When The World Stopped Turning)” by Alan Jackson

@EnglishwithTodd mentioned this song that was written by Jackson as a way for him to make sense of what was happening in the wake of the attacks. @cupryksclasses and @sbnr123 also shared this title.

@TaylorMali shares a reading of a poem he wrote based on his firsthand experiences on 9/11 and the article in Esquire about “The Falling Man.”

“When God Happens” by Mike Rosen

@StevanWaddell shared a slam poem he used with his ninth grade students.

BOATLIFT, An Untold Tale of 9/11 Resilience

@krichau comments on the heroism shown in this video. Tom Hanks narrates the epic story of the 9/11 boatlift that evacuated half a million people from the stricken piers and seawalls of Lower Manhattan.

‏@historycomics reminds us that comics are often an easier way in to tough topics. All of our literature is impacted by historical events.

@oosterheerte paired this piece from Medium along with a video produced by the 9/11 museum.

@profmpc shared a number of resources:

“Zero” a poem by Robert Creeley
“History of the Airplane” by Lawrence Ferlinghetti
September Twelfth, 2001 by X.J. Kennedy
“I Saw You Walking” by Deborah Garrison

@tikaee invited in the local fire department to come for a 9/11 flag ceremony and to talk with our kids about their experiences during this tragedy.

@yellmm invites folks to consider spending time at the 9/11 Memorial site (particularly the interactive timeline), read some letters/first hand descriptions, and have students create their own pieces on September 11th.