A Book for the Ages - NCTE
Back to Blog 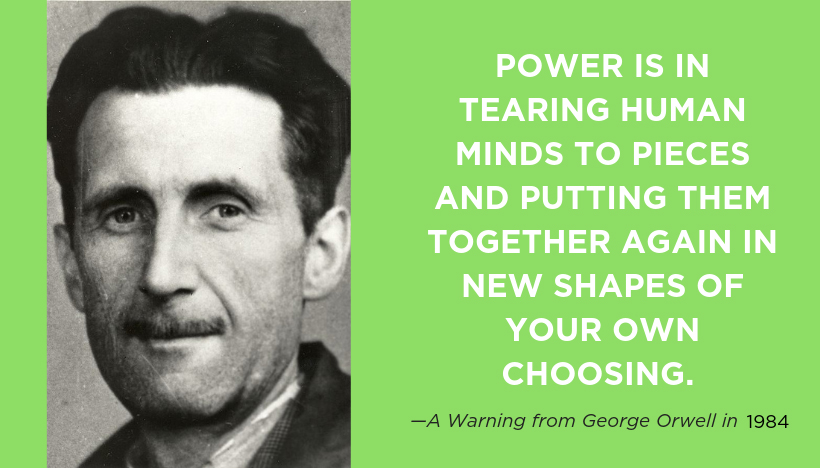 This is what happens, perhaps, when you lose your right to read and think what you want.

Big Brother, Newspeak, Doublethink—words that are now part of our everyday language—are words that George Orwell coined in 1984, his dystopian novel warning about the oppression of a totalitarian state, a “society robbed of free will, privacy and truth.”  Last week marked the seventieth anniversary of the publication of that novel that still has meaning today.

Warnings aside, this book that paints the dangers of censorship has been banned:

As a New Yorker commentary notes,

Orwell’s book was not intended as a book about life under Communism. It was intended as a warning about tendencies within liberal democracies, and that is how it has been read. The postwar Sovietization of Eastern Europe produced societies right out of Orwell’s pages, but American readers responded to 1984 as a book about loyalty oaths and McCarthyism. In the nineteen-seventies, it was used to comment on Nixon and Watergate. There was a bounce in readership in 1983-84—four million copies were sold that year—because, well, it was 1984. And in 2016 it got a bump from Trump.

Certainly, despite objections, the text has managed to live for these 70 years. NCTE even gives out awards based on Orwell’s writing:

Watch this brief primer on the book:

Or listen to a long-version interpretation of 1984 as a “landmark of culture.”

Refer to the following blogs that focus on the right to think, write, and read:

The Right to Read

“Censoring Books, That’s the Opposite of Protection.”

Learning Isn’t Supposed to Be “Safe”