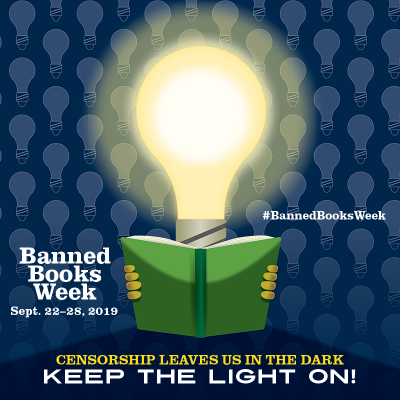 Banned Books Week 2019 will be held September 22–28. The theme of this year’s event is “Censorship Leaves Us in the Dark,” urging everyone to “Keep the Light On.”

As we kickoff Banned Books Week 2019, let’s take a look at some of the Top 11 Challenged Books of 2018. Since it’s important that we keep these books in the classroom and on the bookshelves, we’re paired each title with a teaching idea from NCTE and ReadWriteThink.org.

Written for elementary-age children, this Lambda Literary Award winner was challenged and banned because it includes a transgender child.

George is a Charlotte Huck Honor Book from 2016. Read more about it in “Transitioning Teens: Why We Can’t Forget the T in the LGBTQ Spectrum.”

The Hate U Give written by Angie Thomas

Despite winning multiple awards and being the most-searched-for book on Goodreads during its debut year, this YA novel was challenged and banned in school libraries and curricula because it was considered “pervasively vulgar” and because of drug use, profanity, and offensive language.

As part of their study of The Hate U Give, students learn about the Black Lives Matter movement and in small groups conduct/share research about social issues key to the plot, characters, and themes of the book in this lesson plan. They then read and discuss nonfiction excerpts by James Baldwin and Ta-Nehisi Coates before synthesizing their understanding of all the texts under study through a communal idea poster and an individual synthesis and reflection project.

This Stonewall Honor Award–winning 2012 graphic novel from an acclaimed cartoonist was challenged and banned in school libraries because it includes LGBT characters and was considered “confusing.”

Learn more about Drama and other texts with “Finding Just the Right Story: Motivating Readers with Middle Level LGBTQ-Themed Literature.”

Originally published in 2007, this New York Times bestseller has resurfaced as a controversial book after Netflix aired a TV series by the same name. This YA novel was challenged and banned in multiple school districts because it discusses suicide.

13+ Answers to 13 Reasons Why shares reasons why the issues in the book are issues are worth talking about so we can do something about them.

This One Summer written by Mariko Tamaki

This One Summer has only been on the list once before: in 2016, two years after its 2014 release. It is cited for profanity and sexual references.

“Words Have Power” written by Kristin Pekoll, Assistant Director of the American Library Association’s Office for Intellectual Freedom, encourages us to highlight the value of free and open access to information and shed a light on censorship.

Consistently challenged since its publication in 2007 for acknowledging issues such as poverty, alcoholism, and sexuality, this National Book Award winner was challenged in school curricula because of profanity and situations that were deemed sexually explicit.

Millie Davis, former director of NCTE’s Intellectual Freedom Center,  shared with us Why Students Should Read This Book. Be sure to listen as Alexie talks about this title being banned.

NCTE’s Intellectual Freedom Center offers advice, helpful documents, and other support to teachers and schools faced with challenges to texts or teaching methods used in their classrooms and schools.

How do you support the students’ right to read?