Poor Richard's Almanack was first published on December 28, 1733 - NCTE
Back to Blog 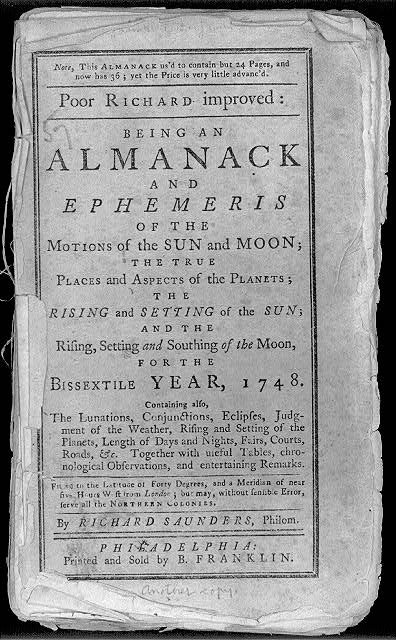 In 1733, Benjamin Franklin, using the pseudonym Richard Saunders, began publishing Poor Richard’s Almanack, which included agricultural predictions, charts of the moon’s phases, and a series of proverbs, such as “haste makes waste.” Franklin, acknowledged as one of America’s Founding Fathers, especially for his role as a statesman, continued to publish his Almanack until 1758.

Share some of the following proverbs taken from Poor Richard’s Almanack with your students:

Ask students to give their impressions of the person who would write these statements. Then, have students choose one saying, paraphrase it, and explain why they agree or disagree with its message. As a final activity, ask students to write their own mottos for life. These mottos can be illustrated and displayed in the classroom or made into bumper stickers or T-shirts.

Read on to learn more about Benjamin Franklin.