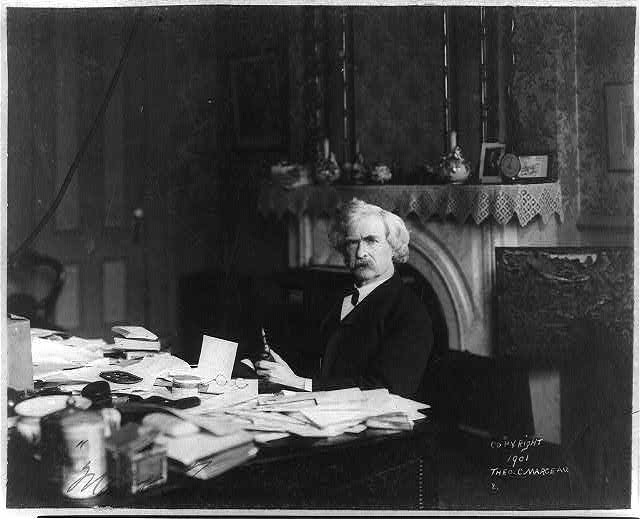 Samuel Langhorne Clemens, popularly known as Mark Twain, was born November 30, 1835, in Florida, Missouri. He spent his childhood in nearby Hannibal. Twain is best known for the novels set in his boyhood world beside the Mississippi River.

Each year, the Hannibal Jaycees sponsor National Tom Sawyer Days during the Fourth of July weekend to celebrate the town’s most well-known citizen, Mark Twain.

Mark Twain was an American humorist, novelist, and travel writer whose life was documented in newspapers. This guide from the Library of Congress provides access to materials related to “Stories about Mark Twain” in the Chronicling America digital collection of historic newspapers.

Mark Twain wrote Adventures of Tom Sawyer, Adventures of Huckleberry Finn, and many other stories. This guide provides access to materials related to “Stories by Mark Twain” in Chronicling America.

As a young man, Clemens worked as a typesetter for his brother Orion’s newspaper, before he followed his dream and went to pilot paddlewheel steamboats on the Mississippi River. He also worked as a reporter for the Virginia City newspaper Territorial Enterprise, adopting the pen name of Mark Twain. It was when he moved to San Francisco that he began to establish a nationwide reputation as a humorist. His wry sense of humor is well known and took many forms.

“Mark Twain” comes from something shouted by crewmen on a boat. To test the depth of the water, a crewman shouts “mark twain!” The crewman is calling for two fathoms, or a depth of 12 feet, which is barely enough for a boat to navigate safely. “Twain” is an old-fashioned way of saying “two” and a fathom is six feet.

View this post on “Mark Twain: Exploring His Life and Work with Primary Sources.”

Author Kathryn Lasky describes how the author came to love Mark Twain’s writings and taught “Huckleberry Finn” and other of Twain’s writings to a ninth-grade class in a Hasidic Jewish Academy.

What role does Mark Twain play in your classroom?