The Words of Walt Whitman - NCTE
Back to Blog 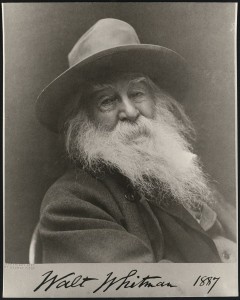 American poet Walt Whitman was born in Long Island, New York on May 31, 1819. In 2019, there were numerous 200th birthday celebrations for Whitman. Walt Whitman died on March 26, 1892. His poetry celebrated modern life and took on subjects considered taboo at the time.

In 1855, Walt Whitman self-published the first edition of Leaves of Grass. During that time, Whitman worked as a job-printer. When it came time to self-publish his small book of poems, Whitman asked local printers the Rome brothers to print the work for him. This book, the very first edition of Leaves of Grass, “changed the way we understand literature and its inextricable link to the materiality of a text.” The book was rather unusual for 1855. A tall, slim volume of only 95 pages, the first edition contains twelve poems and an untitled preface

Walt Whitman wrote other important works, including “O Captain! My Captain!,” which was a response to the death of Abraham Lincoln. It’s notable that Whitman worked as a school teacher, printer, newspaper editor, journalist, and carpenter, before becoming a civil servant and volunteer visitor in Union Army hospitals in Washington, D.C. during the Civil War. As a freelance writer, Whitman penned a variety of poetry and prose, including essays, articles, reviews, fiction and nonfiction for the periodical press, speeches, and autobiographical works. The Library of Congress holds the largest number of Walt Whitman materials in the world, including drafts, notes, fragments, letters, poetry, and prose in the Charles E. Feinberg collection of Walt Whitman Papers and other collections in the Manuscript Division.

Walt Whitman was known for often revising his work numerous times. This post from the Library of Congress shares various drafts of “Song of Myself.” Here is a similar post looking at “O Captain! My Captain!”

Want to learn more about Walt Whitman? Check out this Library of Congress Resource Guide.