Melissa Schieble and Lolita Kucinskiene, “Promoting Empathetic Reading with Between Shades of Gray through a Global Blogging Project,” Journal of Adolescent and Adult Literacy, Volume 63, Number 3 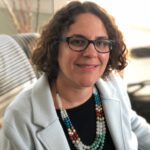 Melissa Schieble is associate professor of English education at Hunter College of the City University of New York. Her scholarship focuses on the dynamics of critical conversations in ELA classrooms and analysis of power, privilege, and oppression in young adult literature. She is lead author of the award-winning book Classroom Talk for Social Change: Critical Conversations in English Language Arts (Teachers College Press, 2020) and former cochair of the ELATE Commission on Social Justice in Teacher Education Programs.

Lolita Kucinskiene graduated from Vilnius Pedagogical Institute in 1985. Since that time she has been working with different age students in different schools in Lithuania. She has participated and organised many international projects with many schools from Europe and Asia. Through all her career she has been in different in-service training courses both in Lithuania and abroad. Recently she works in Vilnius Waldorf Green school.

Nomination Deadline: May 1 in odd-numbered years; the next award will be given in 2021

Purpose:
To encourage English Language Arts teacher development, consistent with the major goal of ELATE, by promoting classroom-based research in which teachers at any educational level raise questions about teaching and learning in their own teaching/learning settings.

“It is the continual reformulation of what we know in the light of what we perceive that matters: and the hardening of what we know into a formula that we apply ready-made instead of reformulating – that is the danger. Thus, our most powerful ideas are relatively general, relatively unformulated starting points from which we constantly reformulate……Research findings are things we can know which could have bearing on what we do when we teach. And ‘development’ should be the name of the process of bringing this kind of knowing into relationship with this kind of doing.” p. 150-James N. Britton, A Note on Teaching, Research and ‘Development’ in Prospect and Retrospect: Selected Essays of James Britton. Edited by G.M.Pradl, Boyton/Cook, 1982.

Award Specifics:
The Britton Award is presented in odd-numbered years, effective January 2014. Nominations accompanied by three copies of the published material, if possible, may be made by any Language Arts educator or by self-nomination. Nominations for studies published between January 1, 2019, and December 31, 2020, must be received no later than May 1, 2021. Submit nominations to elate@ncte.org.

Winners will be notified in July 2021 and announced at the 2021 NCTE Fall Convention in Louisville, Kentucky.

2021
Melissa Schieble and Lolita Kucinskiene, “Promoting Empathetic Reading with Between Shades of Gray through a Global Blogging Project,” Journal of Adolescent and Adult Literacy, Volume 63, Number 3