Keeping the Faith - NCTE
Back to Blog 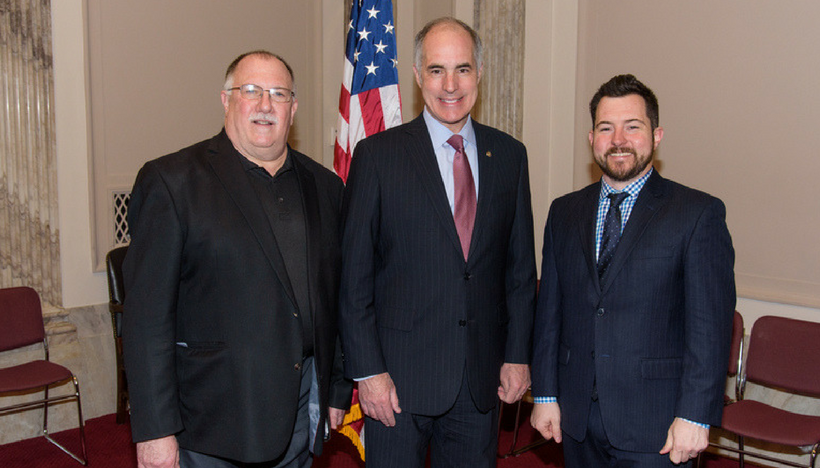 This post is written by member Bob Dandoy, retired educator and an affiliate leader for the PA Council of Teachers of English and Language Arts (PCTELA).

I finally did some quick figuring and came up with the answer to a question I was often asked when I was at this year’s NCTE Advocacy Day in Washington, DC.: this was my SIXTH year doing this work. During that time, I have met with all of my Congressional representatives (one year I met with a staffer); also during that time, I’ve met with the staff of the senators who have served my home state of Pennsylvania.

This year brought a new dimension to the day because I had the opportunity to meet and chat directly with Senator Bob Casey of PA. Lu Ann McNabb from NCTE’s DC office had made arrangements for several of us to attend a “Morning Coffee” with the senator. So my friend and colleague Matt Skillen from Elizabethtown College in PA and NCTE Intern Katelyn Sedelmeyer (an Erie, PA, native) made our way to the Russell office building to catch a brief moment with Senator Casey.

These coffee events are more of a photo-taking opportunity, an opportunity we availed ourselves of. But as far as a substantive conversation, that was not to be had.

I’m not complaining. I am a fan and supporter of this senator, and I thought that with a constituency of more than 12 million people in the state of PA, he was both gracious and generous to take these few minutes of time. And gracious and friendly he was.

Matt took the lead and let Senator Casey know about NCTE, making a quick mention of the platform for which we were advocating. The senator responded knowledgeably, a photo was taken, and we were done, moving along so that the next group could have a few minutes of his time.

Then the real work began.

And that’s my point here. So much of the “heavy lifting” that is done on Capitol Hill is done by staffers, the unnamed young people (yes, they are very young) who do the work of sorting through legislation, communications, and research to present the senator with key points and issues for his consideration.

We huddled in the corner with Jared and Michelle, Casey staffers who work with educational policy. They were friendly, informed, and willing to share their insights into what was currently going on with some of the legislation coming though (such as the Every Student Succeeds Act [ESSA]). They listened. Those of us who have done this for many years know that this is the time spent most productively, the interaction that potentially helped move our agenda forward. I will no doubt value my photo with a US senator, but I wish I had had the presence of mind to ask if the aides could be included in the photo too. Only after my conversation with them did I feel productive. I want to remember them, too, with hopes that I can build a relationship and return to that office with an increased potential for success.

Every year I return home from Advocacy Day not really certain whether I made any sort of significant impact. However, I also return, if not totally confident in our success, with a better feeling about what is happening in DC. I see the commitment and industriousness of the staffers and come away with a sense that someone is trying to move the ball forward, albeit by inches in some cases. I also know that even if I didn’t significantly impact anything, I and my colleagues, friends, and those young staffers tried.

Bob Dandoy is a retired educator and an affiliate leader for the PA Council of Teachers of English and Language Arts (PCTELA).  He has served as the Region 2 Representative for NCTE’s Standing Committee on Affiliates and in 2007 was General Chair for the NCTE Convention in Philadelphia.