Product or Process? Perspectives on Portfolio Assessments in Community College Composition - NCTE
Back to Blog 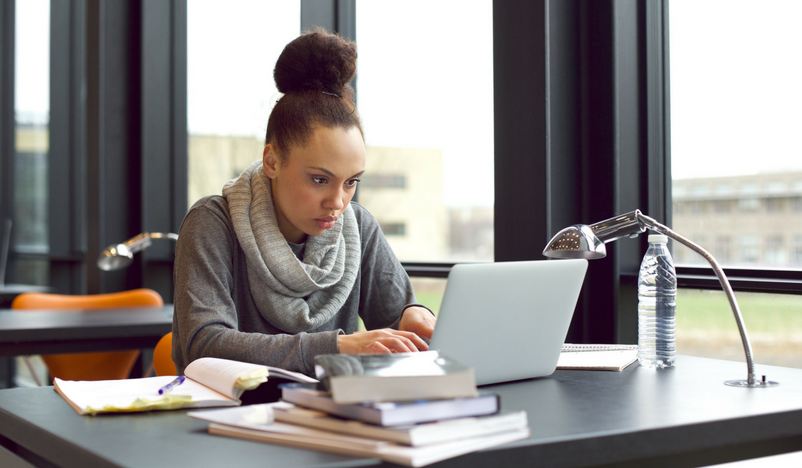 This piece was written by Norman Allen, and first appeared in the March 2017 Council Chronicle.

The use of portfolios to assess composition skills in community college English programs has waxed and waned over the last three decades.

For many instructors, portfolios provide a complex portrait of a student’s growth and ability. For others, the emphasis on process over product blurs the clarity necessary to identify a student’s ability to move forward in the curriculum.

While practices vary across campuses, most portfolios consist of a small collection of written work, often in multiple drafts and across multiple genres. A final reflective essay puts the emphasis firmly on growth and on self-assessment.

Bringing Clarity to the Writing Process

For Howard Tinberg, professor of English at Bristol Community College, Massachusetts, that reflective piece is key to the process. “It can be a cover letter or commentary on how the writing has changed,” he explains. “It gets the student to be self-conscious about their writing habits and about their strengths and weaknesses.”

Of equal importance is fluency across genres. “It might be a proposal to solve a community problem, or a letter to the editor, a review of some kind, or an analysis of cause and effect,” says Tinberg.

In each case, the student chooses the work that will represent their growth as a writer. Success thus depends on learning to recognize strong writing from weak.

“There has to be a lot of modeling, sharing of works in process, and conducting workshops where students critique each other’s work,” Tinberg says.

“They have to ask, ‘What makes writing work? When is the writing not working?’”

Along the way, students draw on detailed rubrics and learn to use the language of composition and of critique. Tinberg hopes his approach brings clarity to the writing process. “Students arrive with a sense that writing is mysterious and subjective,” he says. “We want to change that.”

Miles McCrimmon, director of Advance College Academies and former professor of English, speaks highly of the value of portfolios.

“I fell in love with the idea of deferring judgment about a student’s performance to as late as possible in the semester,” he says. “That’s especially important at a community college because of the diversity of skill sets we see at the beginning of the year.”

McCrimmon has high praise for the innovations made by Edward M. White, who developed what is known as Phase II of portfolio assessment. 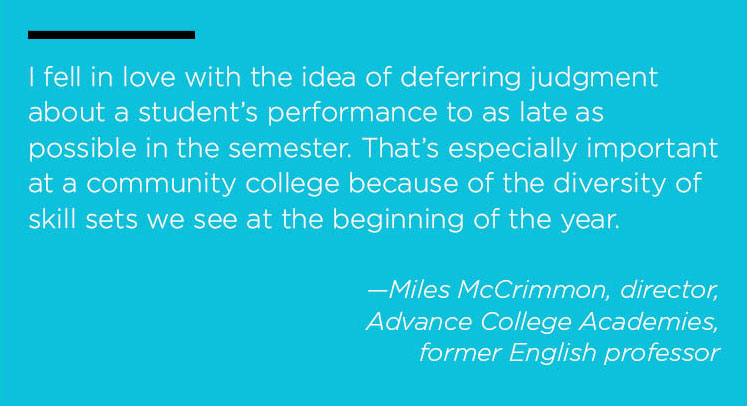 “White puts the emphasis on the reflective letter, which had to show actual changes in the writing, using examples, using artifacts,” McCrimmon says. “Instead of getting general hyperbole about how the course changed the student’s life, you start getting evidence of where the student met the course outcomes—and it’s the students who are identifying that.”

For McCrimmon, that process of self-examination and reporting is an important transferable skill. “You’re essentially training them to move into the adult world of self-promotion, or of the annual review where you’re asked to provide evidence of the stuff you’ve done. It’s much more a pre-professional genre.”

The notion of transfer across genres and settings is key to Tinberg’s approach as well. “We’re talking about a student’s ability to take key concepts and carry them to other writing situations and other places where writing is required,” he says.

“Can students call on what they acquired in a basic composition class and say, ‘What does my boss need? What does he really want me to do here? What genre do I write in?’”

Tinberg notes that writing skills have become essential in both professional and personal settings.

“We live in an environment where we’re saturated with words,” he says. “How do we help our students see that writing outside of school is connected with writing inside of school?”

Despite the potential benefits, the challenges of portfolio assessment can be daunting to instructors and students. Annemarie Hamlin, associate professor of English and chair of humanities at Central Oregon Community College, and her colleagues worked with portfolios in several classes but ultimately reject them as a departmental mandate.

“[Portfolios] were originally seen as a welcome alternative to the high-stakes, timed final exam,” she explains. “There were some people who thought, ‘Yes, this is a way to determine if a student is actually ready to complete this class.’

The tension between pedagogical styles was especially keen during portfolio review. Like most departments using portfolios, Hamlin’s employed a shared review process in which instructors provide a “second opinion” on work from students they don’t know. It raises the stakes for students, and promises a more accurate assessment, since second readers are unaware of such variables as a student’s classroom attitude or homework record.

“Our review process was unwieldy,” Hamlin admits. “It was a full day of reading, and of reading multiple portfolios. It also raised inevitable tensions between people with different values and different grading practices. Teachers were saying, ‘You’d give that an A? I’d give it a C.’ Those tensions didn’t bode well for a long-standing program.”

Developmental composition faculty at Howard Community College, Maryland, adopted portfolio assessments just this fall. Previously a final, timed essay was given a second reading but full portfolios were not in use.

“What we got [in that final essay] was a single snapshot of whether a student had mastered all the course outcomes,” Associate Dean Jeremy O’Rourke explains. “But it wasn’t a holistic look at the course and at the student’s work. We’re trying to move away from a rushed and mostly artificial experience that doesn’t reflect the sense of process that should actually occur during writing.”

As with most portfolio assessments, the final essay will both reflect new skills and employ them. “Students will quote their own work,” O’Rourke says. “They’ll refer to their writing as evidence.”

Second readers will continue to assess final essays in a process that brings the faculty together for an efficient two and a half hours. “I like the group process because it builds a culture,”

O’Rourke say. “It makes the learning objectives a living document. We have to ask, ‘What do they mean? How do we interpret them?’ It keeps the conversation going.”

It also helps relieve the instructor’s anxiety about serving as gatekeeper to advanced classes and opportunities. “That anxiety is especially present in developmental education,” O’Rourke says. “This gives teachers assurance that there’s at least one evidence of mastery that’s been validated. They walk out of that group meeting glad they did it.” He adds with a laugh, “Though they’re rarely looking forward to it.”

Transferability is a high priority. “We’re moving away from courses that are skills based to courses that explore the kind of thinking that students will need in future course work,” O’Rourke says. Metacognition has a particularly high value. “Students need to think about their thinking,” he says. “And we need to think about how to teach reflection and metacognition.”

He sees the curriculum moving away from teaching essay patterns and focusing more on purpose and process. “The deeper stuff is what transfers” he says, acknowledging that it’s hard for teachers to let go of long-held practices.

“I struggle with that on a daily basis myself. I know that students would latch on very easily to this pattern I’ve constructed for them, but I need to let go of that and let them struggle to make their own choices.”

Tinberg finds that new pedagogical models are particularly challenging for community colleges. “Isolation is a real concern, because of the work load,” he says. The typically high numbers of adjunct instructors means that large portions of the faculty aren’t always available for department meetings or professional development.

A similar challenge faces students who are balancing school with work schedules and adult responsibilities. The emphasis on revision can be especially daunting. “Students in my classes have to write three drafts,” Tinberg says. “It’s quite a shock.”

The potential benefits, though, are far-reaching. Tinberg is currently exploring the connections to be made between composition and career-specific concentrations, such as Nursing and Criminal Justice. “I’d like to get non-English faculty on board who would help us understand what their students need from a comp class,” he says.

Next steps include gathering data to prove the efficacy of transfer-focused pedagogy. “Kathi Yancey, [Professor of English and Distinguished Research Professor] at Florida State, is working on this,” Tinberg says.

“The hope is to track transfer over a year at least. It means interviewing students throughout the semester and then following them the following semester, and perhaps following a semester beyond that. It’s longitudinal work.”

Driving the work is an acute awareness of its importance.

“The stakes are higher in community college,” Tinberg says.

Norman Allen is a freelance writer and playwright based in Washington, DC. His essays and commentary have appeared in the Washington Post and in Smithsonian and Yes magazines. Follow him on Twitter: @WriterNorm.