What Does Cherry Picking Have to Do With Literary Analysis? - NCTE
Back to Blog 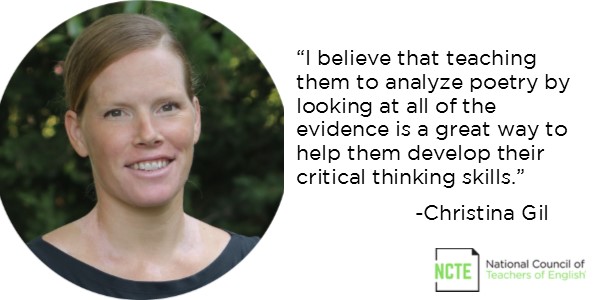 This post is written by member Christina Lovdal Gil.

I’ve been thinking and reading a lot recently about the various ways that people convince themselves that what they believe is true, in spite of whatever evidence might contradict those views.  Now that I seem to live in a time of fake news and alternative facts and hyper- partisan politics, it has become increasingly important to me to figure out how to help teenagers to avoid following in those deep-rutted tracks of flawed thinking.

Analyzing poetry might not seem like the best way to deal with current situations, but in fact, whether students are talking about America’s greatness, or about death and old age, or about the immigration experience, I believe that teaching them to analyze poetry by looking at all of the evidence is a great way to help them develop their critical thinking skills.

Here are a few terms that I have learned in my research:

Confirmation bias or cognitive bias is the tendency of human beings to ignore any evidence that refutes already-held beliefs.

The backfire effect is the name for what happens when human beings hold those possibly flawed views even more strongly when they are presented with evidence that refutes them.

The illusion of explanatory depth is the belief that we know more than we really do.

The fallacy of the single cause is the belief that there is one, simple reason for a phenomenon when it might have been caused by number of factors.

The cherrypicking fallacy is the tendency to choose evidence that supports an argument while ignoring that which disputes it.

I have recently learned these terms, but I have been fighting these biases and flawed ways of thinking for years—in the way that I teach my students to analyze poetry.

The steps that I instruct my students to follow when analyzing a poem are the same ones that they can follow when attempting to understand any kind of complex idea or issue.  My biggest goal here is not for students to create a smooth-sounding thesis or for them to identify poetic elements by name.  What I most want is for them to embrace the parts of the text that are confusing or ambiguous or contradictory.  Those are the pieces that scare the human brain the most, and they are also the places where the meaning happens.

This process could be followed for any kind of examination or analysis.

First, you examine the evidence.  Notice that I didn’t say that you start with a thesis or an idea that you want to prove.  Doing that will only encourage cherry picking and flawed ideas.  Instead, you look at what’s there and notice everything you can.  For poetry, this might mean that you annotate all of the interesting words or images, for a science experiment it might mean that you take notes on the effects of a catalyst, and for a history analysis it might mean that you read multiple accounts of an important event and analyze data about the outcomes of that event.

Then you come up with an idea based on the majority of that evidence.  Looking for trends or causes or reasons is a good way to make sense of complicated information, but we also have to watch out for the old fallacy of the single cause.  I like oversimplification as much as the next person, so this is one that I have to be especially cautious of.  But a good first step towards understanding evidence is to come up with a way to explain the majority of what you’ve found.

Then, you look specifically for the pieces of evidence that contradict that idea.  When you’ve lumped together data in order to make sense of it, there will always be something left out.  Rather than see that as a minor drawback to your thesis or as a piece to quickly identify in a short paragraph about the counterclaim, you’ll need to recognize that evidence is very important.

Finally, and this is the hardest as well as the most important part, you create a new thesis that incorporates the evidence that seems to refute your idea.  The best way that I know to train your brain to let go of all those tendencies to ignore evidence or alternative ideas is to embrace the stuff that is subtle or ambiguous or hard to fit in a nice neat mold.  Ideas that incorporate it all are far superior to ideas that are based on cherry picking evidence.

It’s not that every human being is subject to these tendencies towards biases in our thinking all the time, but we have them in our brain chemistry.  And when you put all those fallacies and beliefs together, what you get is a room full of people, screaming their heads off about their own ideas, listening to no one except themselves and those who repeat their thoughts, and refusing to acknowledge any evidence that doesn’t support what they already think.

I want to do anything that I can to get those people to quiet down and start listening to each other.

Christina Gil was a high-school English teacher for sixteen years, but she recently left the classroom to follow a dream and move with her family to an ecovillage in rural Missouri. When she is not hauling water to her tiny home, she can be found homeschooling her two kids or meeting with her neighbors about the best way to run their village.