You Mean She’s Alive? - NCTE
Back to Blog 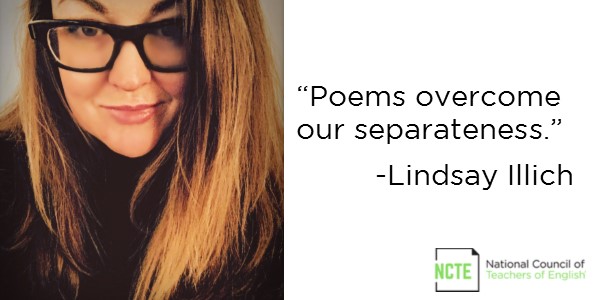 I get this question from students often when I share a poem in class by a living writer. For some students, poems are historical, discrete things that come to them by way of textbooks,  anthologies, or riddles of dead writers come to haunt them. Or worse, poems are inflicted on them as assessment instruments in standardized tests where students are asked to dissect the poems’ meanings (you can read about Sara Holbrook’s horror after discovering two of her poems were used on standardized tests in Texas). It does not always occur to them that the poet might be a contemporary who could be writing poems on this very day, or even right now.

The poems writers are sharing right now are beautiful and devastating, shimmering in their perfect singularity. Poets ask us to consider what it must be like to love a brother who is an addict (Natalie Diaz), to see a flower that might have been planted by the hands of Eric Garner (Ross Gay), to love someone more than all the windows in New York City (Jessica Greenbaum), or to be getting an MRI to monitor the spread of your cancer (Leilla Chatti). Not only do these contemporary poems and poets show students how poetry is uniquely suited to address emotional complexity, but also they demonstrate how it is poems build invisible bridges that connect people across time, space, and experience.

“Good Bones,” a poem by Maggie Smith, garnered a worldwide readership after it was published just after the Orlando Pulse shooting. Although the poem was not written in response to the tragedy, its sentiment resonated. Many felt that it gave a collective voice to how hopeless we feel in the face of violent tragedy. The poem was named poem of the year by Public Radio International and was featured on the April 9 episode of the CBS TV series Madam Secretary.

So where do you find these alive poets? Here are a few suggestions:

Another reason to read and connect with contemporary poets is to offer your students the opportunity to ask writers questions about their work. After reading a poem by Adrian Matejka, my students wondered why the poet identified with the boxer, Jack Johnson. It occurred to me that with Twitter, we could just ask him. So we did, and he graciously replied.

Yes, the poet is alive, and students will love her work if you share it with them. And, perhaps, reading the current work of living writers will serve as reminders to students that writing as a way of expression is a thing that people do, that even they could do.