What Happened in Your State This April? - NCTE
Back to Blog 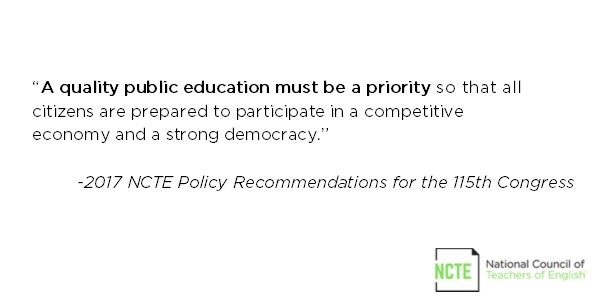 Colorado: Stevi Quate discusses Colorado’s choice of attendance as the fifth indicator in ESSA Colorado-Style: The Challenge of the Fifth Indicator.

Readers may want to visit ESSA Implementation in the States to see what your state is doing.

Texas: In Campus Carry VII, Michael Gos continues his series, noting that this August, students may carry a concealed weapon at community colleges. There is concern, however, over the presence of high school students who attend classes through dual enrollment.

Pennsylvania: Due to declining budgets and enrollments, Possible Faculty Lay-Offs and Program Cuts are on the horizon, D. Alexis Hart writes.

Arkansas: In Little Rock School District at Status Quo, Donna Wake expresses the concern that the state is closing schools in predominantly African American neighborhoods after having passed a law offering charter schools the rights of first refusal for unused school facilities.

Donna also provides links for teachers to review Annual School Performance and an analysis of Teacher and Superintendent Salaries.

New York: Derek Kulnis posts that New York Changes Parent-Teacher Conferences by including students in the conferences to review their work and to provide time for teachers to have parental interaction.