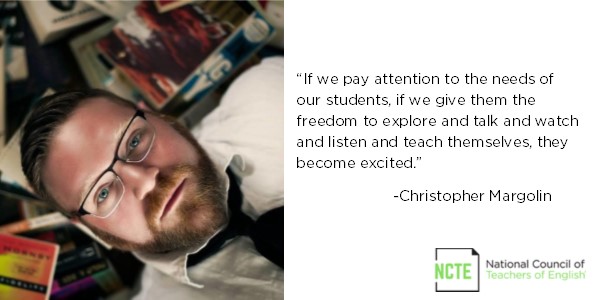 Teachers tend to teach poetry because they feel it has supposed to be in the curriculum. They believe that students need to be familiar with sonnets, haikus, and acrostics, but what they neglect to do is allow their students the freedom to simply explore — and write poetry themselves. They spoon-feed old, outdated pieces that have not been relevant in decades, focusing on the dead white guy, or the poets they feel will strike a chord. They teach lessons from rote memory or out of textbooks. They do not watch for the yawns. Instead of partnering with their students to find out what might actually be of interest, they stifle their creativity and ruin poetry for the majority of students.

I am guilty of all the above.

I came out of college as an expert in sixteenth-to nineteenth-century British poetry, and when I started teaching, I thought these were the necessary poems for all students. I wanted them to hear the rich language, dive into the hefty topics, and talk about the importance of blah blah blah. I was excited about it, as were a few random students, but they didn’t really understand what I was talking about. Showing them poems by John Donne, or William Blake, or Samuel Coleridge didn’t inspire any real emotions, but I taught them all the same — because I liked them. The choice of texts had absolutely nothing to do with my students, and it showed on their faces — which I only noticed after a handful of years of digging through the obscure.

A few years ago, one of my students asked me to prove the relevancy of poetry in the twenty-first century. That’s when I realized I didn’t really know any current poets. I knew the laureates and a handful of current pieces I had read in different journals, and I could cite reasons why I found poetry to be important, but the challenge left me questioning how important the poems I had been teaching were in today’s world. Therefore, I stopped. And did some research. I had heard about Button Poetry, and I spent time sifting through YouTube videos of performance pieces and slam poetry competitions. I watched through five seasons of Def Poetry Jam and fell in love.

My students and I started a Twitter account (@poetryquestion) and began to send tweets to literally thousands of artists, poets, musicians, actors, authors, and anyone else we felt might offer 140 characters on how they felt about poetry in the modern world. Then our campaign started to work. We received more than 300 responses. Not only did we get responses, but we also had people reaching out to talk with my students. This was inspiring. This was what my students needed. Instead of staring at words they did not understand, they had real people talking to them — people they knew, people they enjoyed, and people who were relevant.

I had my students open up their Chromebooks, go to YouTube, type in “Button Poetry,” and hit play on whichever video popped up first. I told them to click on every poem they could find. They watched countless videos and wrote down what hit them the hardest. Then they filled my whiteboard with 183 names of poets. After that, they began to write their own poems. They wrote about the abuse they suffered, or family vacations, or fears, or joys, or teenage life, or school, or whatever made sense to them in the moment. They wrote, and they did not stop.

In addition to Twitter conversations with a number of the poets they had discovered, my students Skyped with Joel Madden of Good Charlotte and with Saul Williams. We held Twitter interviews with Marc Maron, Taylor Mali, and so many more. Alexander Dang and Clementine von Radics visited our classroom to perform.

And the students kept writing. They kept putting their emotions on paper and crafting them into performance pieces. I did not teach them how to format anything. Instead, I just told them to write. I told them to watch more poetry. I told them that we, as a class, valued their words and their lives, and that this would be a comfortable, judgment-free environment, — and they listened. They were one another’s allies and shoulders to cry on, and people with whom they could laugh and cheer on throughout the process. By the end of the unit, every student in every class had shared their poems with their peers, and some even went to a local poetry slam to share with complete strangers.

If we pay attention to the needs of our students, if we give them the freedom to explore and talk and watch and listen and teach themselves, they become excited. They want to learn. They want to write. They want to collaborate. But they only want these things if teachers stop giving the rote-memory rubbish and instead partner with them, enjoy their content, facilitate rather than lecture, and help to prove the relevancy of words in the twenty-first century.

Chris Margolin is the Vancouver Public Schools’ Curriculum Specialist for Secondary English Language Arts, Advanced Placement, College in the High Schools, and Running Start. He spent 12 years as a high school English teacher, working not only with students, but also as a member of the district curriculum design team, developing the district’s Creative Writing course. He currently resides in Vancouver, Washington with his wife and daughter.