Using Literature to Shatter Our Entrenched Views, Part I - NCTE
Back to Blog 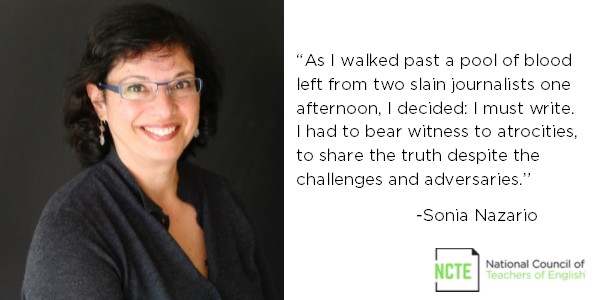 Pulitzer-Prize–winning journalist Sonia Nazario was the keynote speaker at NCTE’s 2014 Annual Convention. What follows is her reflection three years after the publication of Enrique’s Journey. This is the first of two parts.

We live in an era of entrenched views. This is especially true with polarizing issues like immigration. As a journalist and author, I have always used storytelling to take readers into new worlds and help them see even the most polarizing issues in deeper, broader, and new ways. In 2014, when I gave the opening keynote at NCTE’s convention in Washington DC, I talked about how Enrique’s Journey, my book about an immigrant boy, had changed many students’ views about immigrants.

In the past three years, my reporting for the New York Times has challenged my own views about what how to best address immigration. The search for answers helped me find solutions I believe many Americans—both on the left and right politically—can agree upon. Yes, even on immigration. So I went back to DC this spring to give a TEDx talk about what might work.

As the child of immigrants, my interest and knowledge about this issue stems from my DNA. My parents set foot in the United States after the difficult decision to leave Argentina for more opportunity. This wasn’t the first time their families had migrated. You see, my mother’s Jewish family fled Poland prior to the outbreak of WWII, and my father’s family had fled Catholic persecution in Syria. There they were, newlyweds with a lifetime of experiences already behind them, once again leaving one home in a foreign land for the next.

Growing up in the Midwest, I was fortunate to become a part of a community as my parents developed roots in their adopted home. Then my father died.  My widowed mother took us back to Argentina. Her timing was terrible. I was thirteen years old, still reeling from the loss of my father, and moving to a country where the military was taking power. People were “disappearing.” Family members and friends were being tortured and killed. One evening, my mother made the precautionary decision to burn our family library in the backyard—Alice in Wonderland could get you jailed. As I walked past a pool of blood left from two slain journalists one afternoon, I decided: I must write. I had to bear witness to atrocities, to share the truth despite the challenges and adversaries.

Years later, as I continued to learn the stories of other immigrant families, I was shocked to hear that many immigrant children, as young as seven, make the journey to the United States alone. They seek to reunite with mothers who came to the US and left their children behind in Central America years ago. Children ride on top of freight trains—called La Bestia, The Beast—up the length of Mexico. Waiting for these innocent children are bandits, corrupt police officers, gangsters, rapists, and more. They’re beaten, robbed, raped, and sometimes killed. They lose legs, arms, and fingers riding La Bestia.

Some of them make it. Most don’t.

Sonia Nazario is an award winning author and journalist who writes about social and social justice issues. Enrique’s Journey, for which she won the Pulitzer Prize, is among the most assigned nonfiction books as a common or summer read at high schools and middle schools in the U.S.

Read NCTE’s Resolution on the Dignity and Education of Immigrant, Undocumented and Unaccompanied Youth here.