Using Literature to Shatter Our Entrenched Views, Part II - NCTE
Back to Blog 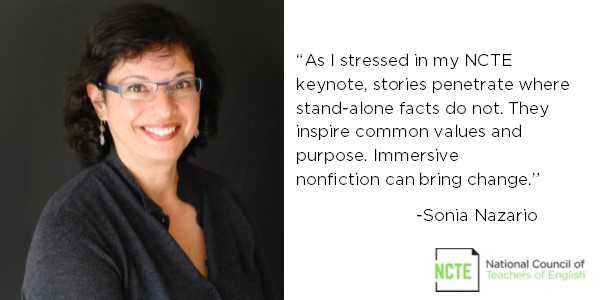 Pulitzer-Prize–winning journalist Sonia Nazario was the keynote speaker at NCTE’s 2014 Annual Convention. What follows is her reflection three years after the publication of Enrique’s Journey. This is the second of two parts. You can read the first part here.

I’ve always focused on those not getting enough ink – women, children, the poor, Latinos. The journey of these children, of Enrique, had to be told. Amid all the noise, information, and rhetoric, and regardless of where one lies on the political spectrum, these children are still migrating. Their stories have forced me to rethink my own entrenched views, challenge the narrative we’re fed, and find new solutions. As I stressed in my NCTE keynote, stories penetrate where stand-alone facts do not. They inspire common values and purpose. Immersive nonfiction can bring change. We have seen it time and time again through Uncle Tom’s Cabin, The Grapes of Wrath, The Jungle. These stories help us better understand our collective reality and ignite a fire for improving our communities and the world.

Enrique’s Journey is doing that. This one boy, this one story is humanizing immigrants in the United States.

Since the publication of Enrique’s Journey, I have been contacted daily by students and teachers about how this story has changed their perspective about immigrants. I get emails from students raised by white supremacists and skinheads in Arizona. From African American students in south Chicago who shared that black and Latino students did not interact but now relate better—after all, so many African American families were torn apart as part of the great migration out of the south during Jim Crow.

And I hear from so many Latino students. These students finally see themselves in a story, feel a sense of pride at being part of the fabric of this nation’s story. Many also begin to understand they are not alone in the resentment so many hold towards parents who made the difficult decision to leave them for so long. A rage like that is so consuming that their education suffers. Teachers share stories of finally connecting with students that they were previously unable to relate to. For the first time, some students don’t want to leave class at the end of the period– they aren’t done listening; they aren’t done sharing.

This engagement is critical for children landing in classrooms across the country. Children of undocumented parents are growing seven times faster than others. The current crop of kindergartners will see the number of Latinos grow from 17% to 30% of the population by 2050. These children will fill the void as we “baby boomers” fade away. Unfortunately, this same group has the lowest educational attainment of any group.

Unlike when I started to study child migration two decades ago, today many immigrant children landing in American classrooms are running from threats, from governments that cannot or will not protect them. These children are refugees. I used to believe immigration was an issue that had to be addressed in the US. Now I know the solutions must be focused on addressing what is pushing children out of a handful of countries—El Salvador, Honduras, Guatemala. The most effective funding will be spent on US programs that are showing promise in reducing violence in Enrique’s home country of Honduras.

For better or worse, I will continue to be these migrant children’s voice and advocate so they do not have to return to a country where many face danger and even death.

I invite you to keep sharing Enrique’s story and to view my TEDx talk to help bring new solutions to your students.

Thank you for continuing to educate others about this country’s newcomers.

Sonia Nazario is an award winning author and journalist who writes about social and social justice issues. Enrique’s Journey, for which she won the Pulitzer Prize, is among the most assigned nonfiction books as a common or summer read at high schools and middle schools in the U.S.

Read NCTE’s Resolution on the Dignity and Education of Immigrant, Undocumented and Unaccompanied Youth here.