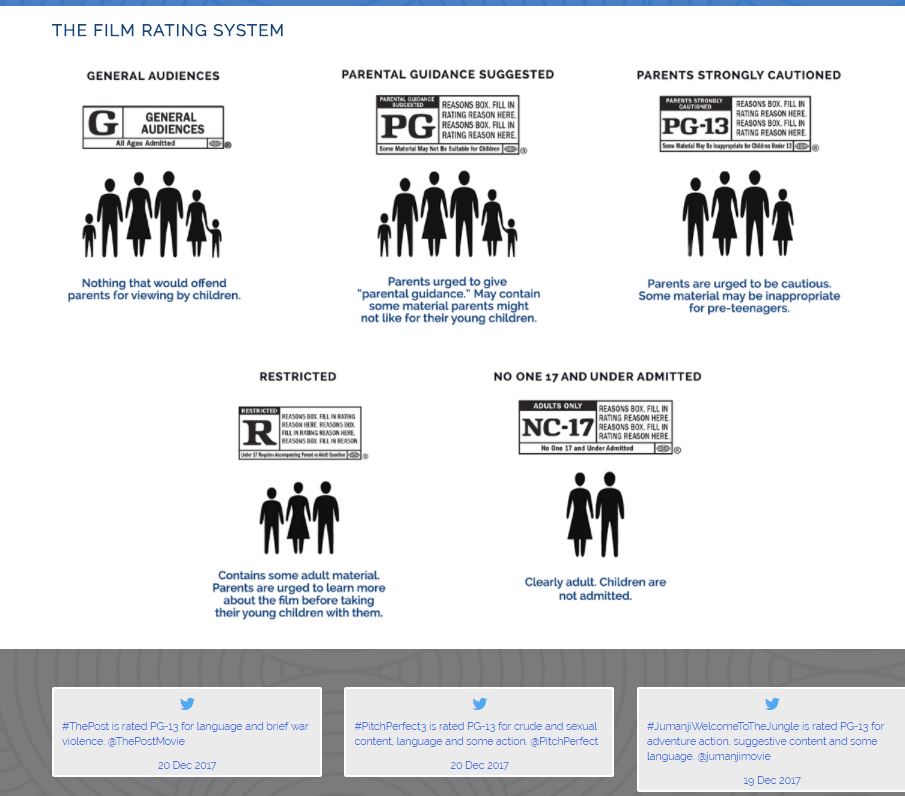 Maybe you love the movies as much as I do and bask in this time of movie mania leading up to the Academy Awards. It helps that most schools have a holiday break made for spending time in movie theaters!

So, if you’re spending time looking at movie schedules, let’s take a look at the MPAA Film Rating system and how it might impact teaching and curriculum, especially if you watch movies not only for fun but also with an eye towards some you’d consider showing in class.

The MPAA Rating System  was established in 1968 and describes its goals as follows:

“Movie ratings provide parents with advance information about the content of movies to help them determine what’s appropriate for their children. After all, parents know best their children’s individual sensitivities and sensibilities. Ratings are assigned by a board of parents who consider factors such as violence, sex, language and drug use and then assign a rating they believe the majority of American parents would give a movie.”

“motion pictures exhibited and distributed commercially to the public in the United States, with the intent to provide parents information concerning the content of those motion pictures, to aid them in determining the suitability of individual motion pictures for viewing by their children.”

Note, the MPAA ratings give no consideration of the educational value of a film. Little matter, I suppose, if you’re only using the ratings to decide whether to take your 10-year-old to see Jumanji, which is rated PG-13.  But what if you wanted to show it to your 8th graders during your unit on coming of age stories or as a pop cultural comparison to Lord of the Flies?

Or take The Post  which is also rated PG-13. Maybe you want to use this film in your high school journalism class. But maybe your school has a rule that nothing but G or PG films are allowed.

Many schools have appropriated the MPAA ratings as curricular guides when they are nothing of the sort. In fact, the ratings are a great example of red-flagging, which in the NCTE statement refers to books but could just as easily refer to films:

“In an effort to avoid book controversies, some school districts have begun the practice of rating or even “red-flagging” books that have been challenged in other schools. Rating books by some sort of symbol or letter, or denoting books that have been challenged — by someone, somewhere — does not provide meaningful information and increases the likelihood that such books will be unavailable to students.”

MPAA ratings red-flag films based on little pieces of the films, not on the film as a whole and certainly not on the educational value of the film. The ratings count cuss words and call out one section of the film. For example, see the Parent Guide to The Post.

You don’t teach by counting cuss words or times a character smokes or war or sex scenes in a text. Good gollly, what rating would Of Mice and Men Receive! You teach the whole text and let its characters act the people they’ve been written to be. You teach the whole text because as it’s written, the whole of it is what connects with your students and pushes them toward meeting the goals of the curriculum. Don’t let MPAA Ratings serve as curricular guidelines in your school.