Storytelling through Music: An Israeli Folk Group Visits the Classroom - NCTE
Back to Blog 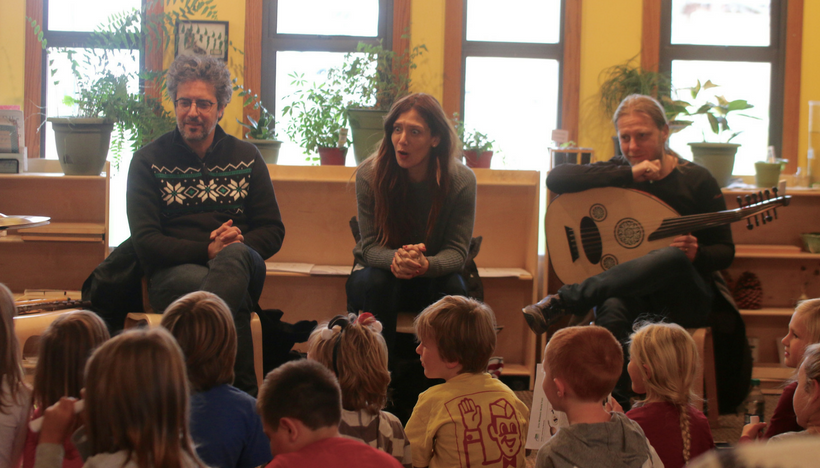 This post is written by member Molly Sutton Kiefer.

I grew up in community theaters—running up and down the aisles, playing pioneers or detectives with my little sister, my father rehearsing on stage. This professor-by-day was a Pep Boy, his costume a gas station attendant’s jumpsuit. His claim to fame was the line, “My name is Jackson / and I pump with great speed / and I’ll get you an-y-thing you need,” followed by a lick on the guitar. Not great poetry, I’ll admit, but delightful for a ten-year-old whose father was singing spotlit.

This act of looking, sometimes the only people in the seats, our eye contact bashful and fluttering, was a big part of my childhood. I was receptive to stories told through ballad and on stages; because my father was passionate, we wound up in see-the-singer’s-spittle seats at productions of big-budget musicals. On the weekends, my sister and I snapped a camcorder into a tripod and danced with blankets to soundtracks warbling from my parents’ ancient tape deck. We learned to tell stories with our bodies, making awkward leaps onto wingback chairs. Sometimes the mic picked up our directives: You go there, and what if you were singing alone, and then I came out—yes and then you come and I start looking at you—yes and I am crying—.

Part of that multimodal story experience for my students included a visit from the Israeli group Sofi and the Baladis. Our local theater has received a grant to participate in WorldFest, and over the next two years, four international musical groups will come and share their stories with classes throughout these river communities. 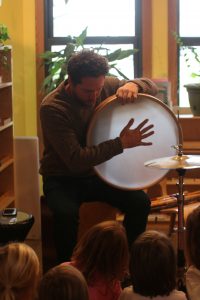 Their history is breathtaking: “The commentary Sofi provides . . . tells the story of the Samaritan Tsedaka family, a moving and powerful story of that family’s—and Sofi’s—search for balance, understanding, faith, and belonging as they navigate the pathway between their Jewish and Arab identities.” This group came to my small classroom this October and told stories to my class using their voices, the oud, the shofar, the qanun. As Sofi introduced her bandmates, they leaned toward their audience of students and said, “We’re going to make up a song for you, right now,” and their fingers fairly flew as they built that thread, the connection, between audience and teller. They improvised, their internal narratives giving directive, and afterward, one of my more boisterous students, bouncing on her heels, proclaimed, “I feel like I’ve heard this song before! I don’t know the words, but I know it.”

Sofi Tsedaka told us, in stories that were bridges between songs, of her life in Israel: her family’s membership in the Samaritan tradition; her sister who fell in love with a Jewish man and how her father said, “If you leave, you destroy us all”; how the community’s response was to give the family a choice between denouncing their daughter or their faith, and how by not choosing, the family was banned from the community. Sofi gave us songs as prayer, celebrations sung at weddings, traditions from her homeland.

“What does she mean?” a student whispered to me, her breath hot in my ear. “Where did she go?” The idea that one’s community would turn one’s entire family out was confounding.

After the close of one song, Sofi said, “It was hard to live in banishment,” picking up on the thread of the last story and moving on smoothly. She told us of how she decided to convert to Judaism, and how, after her exam, the rabbis conferred and told her, “The problem is your name. Sofi is not a Jewish name. You can pick Sarah or Ruth.” Sofi paused and looked into the room, “Nice to meet you again. My name is Sarah. A rose by any other name would smell as sweet.”

Sofi told the students of how people converging in her community—the Samaritan, the Jew, the Muslim—were arguing over land: “They decided to ask the land. The Earth was quiet and then said, ‘I am not sure to whom I belong, but I know the three of you, you belong to me.’” And in that moment, I saw how many of my students belonged to the storyteller. I saw their rapt faces, their brows furrowed as they tried to figure out the instruments’ magic. I knew the next day, they would reach for what noise they could make, what rhythms they could find in pencils and tables, the ripple of paper, their collective voice.

I thought of the stories they might tell now, of their families, their culture, what they hold in their hands as true representation of their selves and their songs. The truth is, we need to provide these opportunities for our students. We can’t let them keep thinking the story belongs strictly to the page. 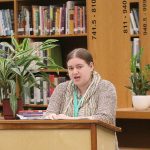 Molly Sutton Kiefer is the author of the full-length lyric essay Nestuary and three poetry chapbooks. She is publisher at Tinderbox Editions, and her work appears in Orion, The Rumpus, and Women’s Studies Quarterly, among others. She lives and teaches in Minnesota.