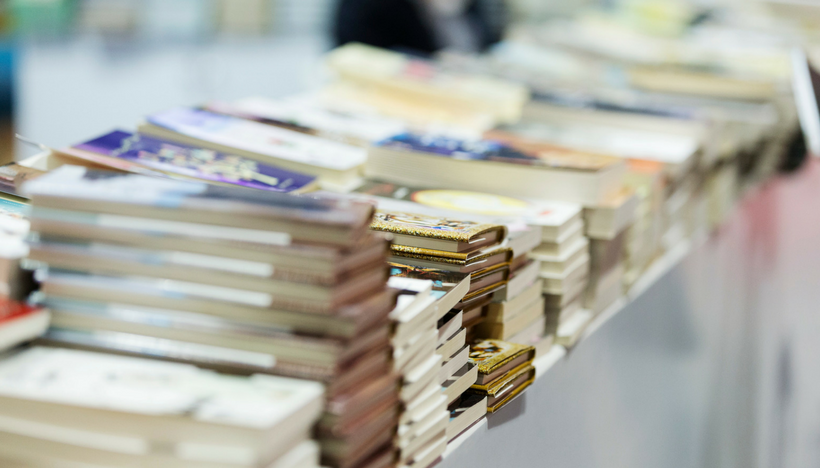 This February, schools, churches, libraries, bookstores, and community and professional organizations throughout the country have been hosting African American Read-Ins to make literacy a significant part of Black History Month.

Choosing which books to share at a Read-In is one of the most challenging (and joyous) parts of hosting. There are so many fabulous books written by African American authors out there, how can you possibly choose? To help get you started, we asked our social media community to share some of their favorites. To see the original messages this list is based on, click here.

Gia is tired of hearing about the new baby. It hasn’t even been born yet, but everyone, even her friends, seem fixated on it. Gia thinks things are fine just the way they are.

1950s Nashville, Tennessee, is segregated, and black people are persecuted, but young Tricia Ann is determined to venture on her own across town to someplace special.

Each Kindness by Jacqueline Woodson, illustrated by E. B. Lewis

Chloe and her friends won’t play with the new girl, Maya. Maya is different—she wears hand-me-downs and plays with old-fashioned toys.

If a Bus Could Talk: The Story of Rosa Parks by Faith Ringgold

If a bus could talk, it would tell the story of a young African American girl named Rosa who had to walk miles to her one-room schoolhouse in Alabama while white children rode to their school in a bus.

Lincoln and Douglass: An American Friendship by Nikki Giovanni, illustrated by Bryan Collier

This book offers a glimpse into the unusual friendship between two great American leaders. At a time when racial tensions were high and racial equality was not yet established, Lincoln and Douglass formed a strong bond over shared ideals and worked alongside each other for a common goal.

The Other Side by Jacqueline Woodson, illustrated by E. B. Lewis

Clover’s mom says it isn’t safe to cross the fence that segregates their African American side of town from the white side where Anna lives. But the two girls strike up a friendship and get around the grown-ups’ rules by sitting on top of the fence together.

More Than Anything Else by Marie Bradby, illustrated by Chris K. Soentpiet

A fictionalized story about the life of young Booker T. Washington. Living in a West Virginia settlement after emancipation, nine-year-old Booker travels by lantern light to the salt works, where he labors from dawn till dusk.

Crown: An Ode to the Fresh Cut by Derrick Barnes, illustrated by Gordon C. James

The barbershop is where the magic happens. Boys go in as lumps of clay and, with princely robes draped around their shoulders, a dab of cool shaving cream on their foreheads, and a slow, steady cut, they become royalty.

Be a King: Dr. Martin Luther King Jr.’s Dream and You by Carole Boston Weatherford, illustrated by James E. Ransome

Featuring a dual narrative of the key moments of Dr. King’s life alongside a modern class as the students learn about him, Carole Weatherford’s poetic text encapsulates the moments that readers today can reenact in their own lives.

In 1960, six-year-old Ruby Bridges walked through an angry crowd and into a school where she changed history. This is the true story of an extraordinary little girl who helped shape our country when she became the first African American to attend an all-white school in New Orleans.

This lyrical, empowering poem celebrates black children and seeks to inspire all young people to dream big and achieve their goals.

The Wedding by Angela Johnson, illustrated by David Soman

Daisy describes the preparations leading up to her older sister’s wedding and the joyous and bittersweet feelings surrounding the event itself.

The Blacker the Berry by Joyce Carol Thomas, illustrated by Floyd Cooper

Anna Hibiscus is so filled with happiness that she feels like she might float away. And the more she talks to her mother and father and grandfather and grandmother and aunties and cousins about it, the more her happiness grows! There’s only one thing to do…Sing!

Chocolate Me! by Taye Diggs, illustrated by Shane W. Evans

The boy is teased for looking different than the other kids. His skin is darker, his hair curlier. He tells his mother he wishes he could be more like everyone else. And she helps him to see how beautiful he really, truly is.

What began as a spiritual has developed into one of America’s best-known songs, and now, for the first time, it appears as a picture book, masterfully created by award-winning artist Kadir Nelson.

Black Girl Magic is a journey from girlhood to womanhood and an invitation to readers to find magic in themselves.

A Child’s Introduction to African American History: The Experience, People, and Events That Shaped Our Country by Jabari Asim, illustrated by Lynn Gaines

Jabari Asim goes beyond what’s taught in the classroom and tells a fact-filled history of African Americans through politics, activism, sports, entertainment, music, and much more.

Langston Hughes’s spare yet eloquent tribute to his people has been cherished for generations. Now, acclaimed photographer Charles R. Smith Jr. interprets this beloved poem in vivid sepia photographs that capture the glory, the beauty, and the soul of being a black American today.

Look What Brown Can Do! by T. Marie Harris, illustrated by Neda Ivanova

Foster your little one’s imagination and encourage them to dream big with this modern Black History book created to inspire brown children everywhere.

Of Thee I Sing: A Letter to My Daughters by Barack Obama, illustrated by Loren Long

In this tender, beautiful letter to his daughters, President Barack Obama has written a moving tribute to thirteen groundbreaking Americans and the ideals that have shaped our nation.

Everything, Everything by Nicola Yoon

My disease is as rare as it is famous. Basically, I’m allergic to the world. I don’t leave my house, have not left my house in seventeen years. The only people I ever see are my mom and my nurse, Carla.

Running. That’s all that Ghost (real name Castle Cranshaw) has ever known. But never for a track team. Nope, his game has always been ball. But when Ghost impulsively challenges an elite sprinter to a race—and wins—the Olympic-medalist track coach sees he has something: crazy natural talent.

Leland Melvin is the only person in human history to catch a pass in the National Football League and in space. Though his path to the heavens was riddled with setbacks and injury, Leland persevered to reach the stars.

Hidden Figures: The American Dream and the Untold Story of the Black Women Mathematicians Who Helped Win the Space Race by Margot Lee Shetterly

Starting in World War II and moving through to the Cold War, the Civil Rights Movement and the Space Race, Hidden Figures follows the interwoven accounts of Dorothy Vaughan, Mary Jackson, Katherine Johnson, and Christine Darden—four African American women who participated in some of NASA’s greatest successes.

The landmark 1954 Supreme Court ruling, Brown v. Board of Education, brought the promise of integration to Little Rock, Arkansas, but it was hard-won for the nine black teenagers chosen to integrate Central High School in 1957. Melba Pattillo Beals commemorates the milestone decision in this first-person account of her ordeal at the center of the violent confrontation that helped shape the Civil Rights Movement

Venus and Serena: Serving From The Hip: 10 Rules for Living, Loving, and Winning by Serena Williams, Venus Williams, and Hilary Beard

Venus and Serena Williams have something to say. But it isn’t all about tennis. It’s about life and how to play it.

Gone Crazy in Alabama tells the story of the Gaither sisters as they travel from the streets of Brooklyn to the rural South for the summer of a lifetime.

Clint Smith’s debut poetry collection, Counting Descent, is a coming of age story that seeks to complicate our concepts of lineage and tradition.

“Still I Rise” by Maya Angelou

We hope this book list has inspired you to host your own African American Read-In! Even though we’re more than halfway through February, there’s still plenty of time to plan one. Check out our toolkit to get you started, and let us know how you’re celebrating on social media using #AARI19!