Defending Florida - National Council of Teachers of English
Back to Blog 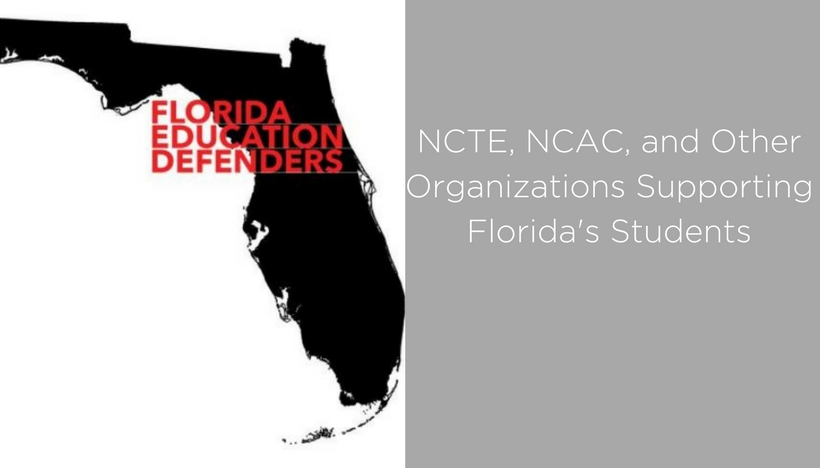 Public education in Florida has been under siege by a variety of citizens’ groups claiming to have the expertise and know-how to improve Florida schools. A major player, the Florida Citizens’ Alliance (FLCA),  asserts that children in the schools “are being indoctrinated in a public-school system that undermines their individual rights and destroys our founding principles and family values.” They say they can fix this and they have many supporters—take a look at the list.

Florida Citizens’ Alliance has teamed up with Truth in Textbooks (TNT), as reported on The Report Card site, to fight objectionable textbooks in Florida K-12.” The article notes,

According to a report by Citizens for National Security, Florida schools contain 25 Pro Islam- biased textbooks. Schools also use obscene materials, and some distinctly anti-American books such as “A People’s History of the United States” by Howard Zinn. Zinn famously stated on a television interview, that “The world would have been better off had America never existed.”

Together these groups are looking for volunteers (not just Floridians) to train to peruse textbooks and document material in them that they find objectionable. Then their documentation is presented as a challenge to a local school district or to the state department of education, if the textbook is on the state’s list of adopted textbooks. For several years, textbook perusers have held local school board meetings hostage with their lists of textbook “offenses” they want corrected—“pouring sand in the gears of district management,” according to one commenter. Note that recent Florida legislation (2017 HB989/SB1210), sponsored and supported by FLCA, allows any Florida county resident to challenge public school instructional materials (charter schools are exempt).

NCTE is not sitting on the sidelines. The Council is one of nine Florida Education Defenders, “ a group of organizations working together to fight book censorship in Florida schools.”  We pool our resources and stand ready to help in Florida and elsewhere. Contact the NCTE Intellectual Freedom Center.