Having the Difficult Conversations - NCTE
Back to Blog 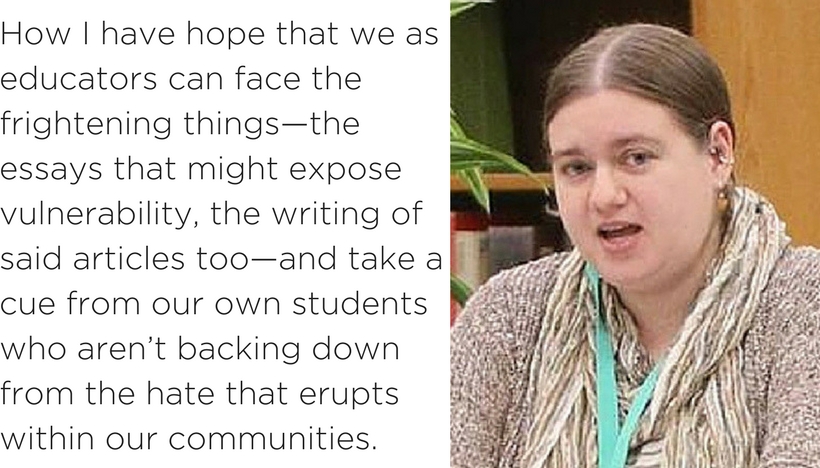 In its support of intellectual freedom, NCTE maintains that students have the right to materials and educational experiences that promote open inquiry, critical thinking, diversity in thought and expression, and respect for others.” NCTE Position Statement on Academic Freedom

In this blog, Molly Sutton Kiefer champions academic freedom through social justice pedagogy but notes, “It’s a tricky proposition because we as instructors have to navigate the privileging of voices in our classroom.”

When I was student teaching, I was assigned to teach To Kill a Mockingbird, a popular novel in English classrooms. I wanted to bring in copies of the 1989 article “White Privilege: Unpacking the Invisible Knapsack” by Peggy McIntosh to discuss with my sophomores. My cooperating teacher discouraged me, and I listened: she knew I was new, maybe thought of the sheer terror of being fresh in front of a classroom, the sensitivities of myself, my students—the lack thereof. I didn’t ask why; I just listened.

My intentions were to bring up those very real issues students were facing head-on in the cafeteria, on the walk home, in after-school jobs, issues that would continue to bulge and demand attention as the world of adulthood continued to press in.

A conversation would have happened, though, rather than sidestepping the issue. Entire units are taught on To Kill a Mockingbird without even discussing what really needs to be discussed: race, justice, equity, experience, controlling one’s own story, the gaze, White guilt, White privilege.

Recently, Duluth public schools removed To Kill a Mockingbird and Huckleberry Finn from the standard curriculum. To be clear: these books have not been banned—they are still available in the library and hopefully encouraged as reading—but they will not be the primary focus of whole-class reading. I saw big colorful boxes pop up on Facebook declaring: “To Kill a Mockingbird being removed because it is ‘offending’ students! Isn’t that kind of the point?” Well yes, I said in response, but here’s the key: is it offending the right readers?

If it’s the few African-American students in the classroom, who are upset at the repetitive crush of the n-word from a White writer’s pen, then no, it’s not the right readers.

In a teacherly Facebook group I’m in, a colleague wrote a what-would-you-do post, telling us of how, in writing lab, her student changed the background to a Nazi swastika. This student had a history of White supremacist ideology and a survivalist home life, and the teacher was unsurprisingly appalled. Not wanting to give further audience or attention to this move, she asked him to remove it immediately and when he challenged her—Why?—she told him, “Because I said so.”

The Greek chorus of social media sang out: Kick him out! He should be suspended, expelled! We will not tolerate this in our classrooms!

Her administration, she said, was less than supportive in disciplinary scenarios, which explained the brevity with which this incident occurred, the metaphorical buck stopping with her. Her firmness is good: she is letting him know that under no uncertain terms will hate be tolerated in her classroom. This is something all students need to hear and observe—that our classrooms are safe spaces and we refuse to tolerate bigotry and hate.

I began to think, though: this student, whose views are upsetting, is begging for attention. I don’t know this teacher, and I don’t know this student, so what follows is part of the dangerousness of any social media speculation: what I want to suggest might hold absolutely no water. I may be a sieve. What if the teacher went hunting for some solid articles that explain why these things are not tolerated in the classroom? What if, instead of saying no, not in my room, we took out a history of (hate) symbols—the swastika has an interesting one—and used that as a jumping-off point to talk about appropriation, about inclusive education practices, but also, and this is so important: letting this be a time to talk about why these overt acts cannot be tolerated.

It’s a tricky proposition because we as instructors have to navigate the privileging of voices in our classroom: the student wants to be heard, and could easily monopolize the conversation in a very damaging way. Giving hate a platform is not anything any of us want to do, nor is shaming our students.

In my essay writing group, which consists of two high school teachers, an elementary teacher, and a professor of education, we talked about the importance of writing and reading these essays, and we asked the question: who does this well? Who writes the essay that speaks out against hate in a way that does not put off the audience you are reaching for?

We want to be the writers of these pieces, and we are looking for models, smart people who are writing persuasively and not divisively. Where are those articles that we could share in the classroom, ones that don’t involve the trollishness that is moving from the comments section and into the articles themselves?

I began to write this piece before February 14th, before Marjory Stoneman Douglas High School’s history changed forever, before students began the admirable work of walking out, of planning and speaking out, of resisting and effectively doing the work that empowers them and effects change. What deep admiration I have for the voices that are rising up, for the bravery it takes to get in front of that audience and speak truth to power. How I have hope that we as educators can face the frightening things—the essays that might expose vulnerability, the writing of said articles too—and take a cue from our own students who aren’t backing down from the hate that erupts within our communities.

Molly Sutton Kiefer is the author of the full-length lyric essay Nestuary and three poetry chapbooks. She is publisher at Tinderbox Editions, and her work appears in Orion, The Rumpus, and Women’s Studies Quarterly, among others. She lives and teaches in Minnesota.